The Communist Party USA will not be taking the passing of Wisconsin Governor Scott Walker’s “Budget Repair Bill” lying down. 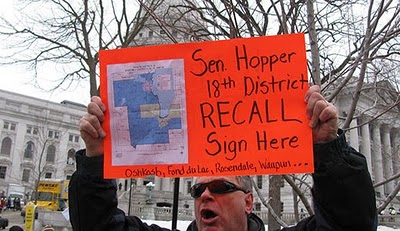 In a statement issued by the Peoples World editorial board, Wisconsin Republicans’ victory will be short-lived, the Communist leadership made it clear that the “Battle of Madison” is far from over.

Wisconsin Republicans and their extremist corporate backers may have pulled a fast one last night, but we predict their victory will be short-lived.

Thumbing their noses at the unprecedented, united outpouring of protest by the working people of Wisconsin, state Senate Republicans bypassed rules and democratic process to stage a Republicans-only vote to destroy collective bargaining rights for public workers…

This latest cold-blooded backroom maneuver strikes a blow at deep-rooted American feelings about democracy and basic rights of working people.

And the people of Wisconsin have shown they will not take it lying down. Over the past month, their united, creative and determined grassroots Cheesehead spirit has electrified the nation…

A movement to recall Republican lawmakers and the governor is gaining steam. Just three state senators need to be recalled to end Republican control of the Senate. Another immediate focus is mobilizing to elect liberal assistant attorney general Joanne Kloppenburg to the state Supreme Court on April 5. She would replace a right-wing Republican and tip the court balance toward worker rights in key rulings. Expect mass actions of all kinds in the coming days and weeks… A broad and united people’s movement can never be defeated.

The Communist Party understands that the outcome of this struggle will be a major turning point in American history. The communists know that their only hope is to make an example of Wisconsin, so that other state legislators will hesitate to pass similar laws in their own states.

Now is the time for all freedom lovers to support the Wisconsin Republican State senators in their efforts to save their state from bankruptcy and mob rule.

The consequences of this drama go far beyond Wisconsin – far beyond the United States.

Wisconsin is to fiscal responsibility, what Arizona was to responsible immigration reform.