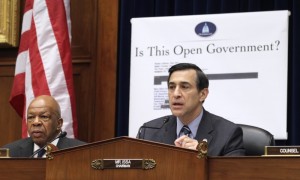 Reported in the Daily Caller:

For the first time since Republicans took control of the House and gained the power of congressional subpoena, the Obama administration has declined to comply with a subpoena issued by top GOP oversight official Rep. Darrell Issa.

In the face of a subpoena by Issa, the Bureau of Alcohol, Tobacco, Firearms and Explosives (ATF) provided no documents by the April 13 deadline, according to an April 20 letter from Issa to ATF’s director, Kenneth Melson.

Issa is threatening contempt proceedings if ATF does not comply.

At issue are documents related to Project Gunrunner and Operation Fast and Furious, in which ATF allowed American guns to be smuggled into Mexico and sold to Mexican drug cartels. The goal of the program was to track the illegal weapons and drug markets after they were used in crimes and abandoned using ballistics information and serial numbers for the guns.

Let’s refresh a bit on America’s foundational principles of government:

America will abide neither Robespierre nor Napoleon.