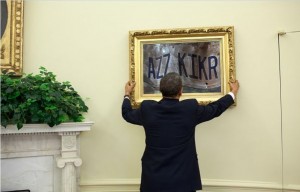 When it comes to Obama’s budget, black is the new red. It’s difficult to predict what Obama will do next, though I’m betting on designer curtains in prison cells. Armed only with common sense, I knew that raising the debt ceiling would prove to be a dumb idea.

Obama is full of ideas that are supposed to save us, like TARP, the auto bailout and Cash for Clunkers. Apparently “Don’t Ask Don’t Tell” wasn’t just for gays in the military, but “code” for Obama’s leadership style, which is rather gay.

As it turns out there was a $2T error in the budget deficit over the next 10 years—not exactly a rounding error, even in The Era of O. This error didn’t hurt Obama’s budget, but helped it, yet the S&P still lowered America’s credit. The S&P’s hypocrisy apparently does have limits.

Obama knows that America’s credit rating is not AA and is closer to a B-minus, the same rating he gave himself on his job performance. Real ratings for both: An F. Yet, the media appear shocked at the news that our credit rating was lowered, as this article indicates. $14.5T of debt with no ability to pay down the interest? The only shock is why it hadn’t happened sooner.

According to Obama, all we need is a balanced approach. Had he gotten a balanced approach when Congress passed the debt ceiling in the first place, then according to Obama, we could have avoided this nasty, mean-spirited, right-wing conspiratorial downgrade, by the Left-leaning S&P. Don’t let the fact that if everybody in America gave 100 percent of their income to the government, we still couldn’t pay our bills, influence your thoughts on this matter.

Perhaps the media actually believed Geithner when he said on Fox Business Network:

There is no chance that the U.S. will lose its top credit rating, Geithner said, forcefully disputing the notion that S&P or other ratings services might downgrade U.S. bonds from their current AAA rating… ”No risk of that, no risk.”

All this hoopla and this “downgrade” means nothing. Does any reasonable person believe that the S&P didn’t know this was coming? It’s not like we went from $2T to $15T overnight. This is like being 49 one day and 50 the next day. You are only one DAY older and were equally close to 49 as you were 50 for half the year. Laddy freakin’ da.

Anybody with common sense knows that you cut budgets when you are out of money and the U.S. is certainly out of money. So regardless of which way the debt ceiling vote went, the lowering of the credit rating should have been a foregone conclusion.

As Harry Reid has said, “It could have been worse.” He was right.

The stock market continued to “bugger” Obama, his economy and the rest of the lying, stealing, perennial parasites that make up the Left, by dropping 636 points and becoming the new second biggest stock market decline in history.

Along with being the man in charge on the three worst days in the history of the Dow (with more to come), Obama has presided over the longest Dow losing streak and the most precipitous devaluation of the dollar since the Civil War era. Further, Obama can take credit for having more people receiving welfare than any president in the history of America.

The media rather humorously asks the question: Return to recession?, in this article. Return? Seriously? If we left the recession, it is only because we entered The Greater Depression. But it’s not Obama’s fault.

As Obama explained, the volatility of the stock market was caused by the contentious debt ceiling negotiations and the world’s witnessing of the partisan bickering that led up to Obama getting his money. It appears the world doesn’t like it when Congress doesn’t just toss Obama the keys to the Porsche and a $2.4T marker in Vegas. If only they had not argued about it!

Obama believes that the ratings companies wanted a “balanced approach” to America tackling our debt problem. He wants more taxes (on the rich); he wants the American taxpayer pecked to death by chickens. But if Obama wants balance, I suggest spending cuts; deep spending cuts.

The government plans for growth. The Fed actually adds a small amount to the budget each year, in every department like clockwork. There is no analysis of whether or not they need a new hire, then simply plan on it. Think “cancer” and how it slowly takes over the cell next to it.

The Republican “win” that allowed Obama to print another $2.4T, not including the Chinese vig, will now need to be paid for by the thing that Republicans fought so hard to protect: The Bush tax cuts.

As Obama said in his press conference, “There is good news.” I wonder what the inmates will think of those new draperies?