In the Omnibus spending bill passed and signed in December 2011 (which contained the NDAA), Congress explicitly told Obama he cannot use any of the allocated funds to advocate for gun control. According to the NRA, Obama issued a signing statement over-riding the will of Congress. I’m asking Senators Jim Inhofe and Tom Coburn what they plan to say/do about the lawlessness. Please Senators, get to a microphone and start talking, start writing op-eds…please. 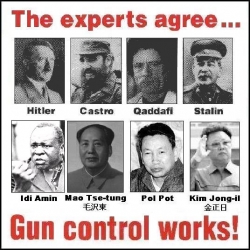 BlueGrassPundit says there were 20-such over-rides of the bill by Obama. There is plenty of outrage about some of the language in the National Defense Authorization Act (NDAA) which many believe allows for the indefinite detention of American citizens. Read those details here.

Thanks to Squidoo for the graphic!