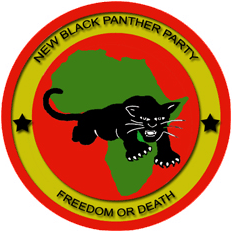 The New Black Panther Party (NBPP) is closely associated with the Nation of Islam (NOI). Former Nation of Islam minister Khalid Abdul Muhammad became the national chairman of the NBPP from the late 1990s until his death in 2001. The group attracted many breakaway members of the NOI. The NBPP is currently led by Malik Zulu Shabazz; it upholds Khalid Abdul Muhammad as the founder of the movement. They note that not all their members are members of the Nation of Islam, though the group acknowledges universal “spirituality” practices within the organization.

They are considered a ‘hate’ group, but the media rarely reports on their movements and intentions. Glenn Beck has stated that the Nation of Islam should be watched as he feels they are capable of great violence.

Although the group claims it does not follow the precepts of Marxism or Mao as the original Black Panther Party did, they do follow the Kawaida theory of Maulana Karenga, which includes black unity, collective action and cooperative economics. In other words, Black Liberation Theology and collectivism – by any other name, it’s still in reality Communism.

The New Black Panther Party is the very antithesis of what Martin Luther King stood for. In fact, they seem hell bent on carrying out the vision of Charlie Manson and his murderous bunch of lunatics.

The Sanford, Florida Treyvon Martin killing has taken a turn today. Martin was 17 years old, [he] left a sporting event on television to buy Skittles for his little brother. He left the house unarmed. That much has been confirmed. Today there is a report of a witness who saw the confrontation from his home, and says Martin attacked Zimmerman. For several days, the news has been of “racist” police and a “racist” 28-year-old Neighborhood Watch Captain, George Zimmerman. He is half White, half Hispanic and some of his relatives are Black. The police report recorded that Zimmerman had a bloody nose and blood on the back of his head. His attorney says he has a broken nose. He was not arrested. The Sanford Police Captain stepped down over the calls of racism, and says there are threats against his life and his family. The Black Panthers have a Bounty on Zimmerman, offering $10,000.00 for is “capture.” Zimmerman is not “missing,” or “on the lam,” but is surely in hiding in fear for his life. In addition to the Bounty, the Black Panthers are forming an army [of] 10,000 Black men to hunt down Zimmerman.

And the nudge is about to become a violent shove into chaos. From what I hear Zimmerman was protecting himself. Since when is that a crime? Not all the facts are in yet, but the New Black Panther Party and others are quick to attack with or without all the facts. Whatever happened to Constitutional rights and innocent till proven guilty? Now, we move straight to lynchings. I also wonder with all the crime across the country, why this incident and why now? It looks to me like the left was looking for an incident to create racial tension and violence and this one was as good as any. It also serves to further the loud voices against Rush Limbaugh, Glenn Beck and others. The calls will go from demanding that they be silenced, to calling for their deaths. It’s coming.

As the New Black Panther Party puts out somewhere between $10,000 and a cool 1 million to kill Zimmeran (not really sure as they have said both), there are crickets from the media. But not from social media. From American Power Blog:

Nation of Islam leader Louis Farrakhan has been among the vocal voices weighing in on calls for justice for Trayvon Martin, an unarmed 17-year-old who was gunned down last month while walking home in Sanford, Florida. On Wednesday, a march was held in New York City in support of the teen’s family, as federal and local authorities launch investigations into how the incident unfolded and why the state’s “stand your ground” law applied to the shooter in this case.

On Twitter yesterday and today, Farrakhan sent some curious tweets regarding peace, justice and retaliation that could be interpreted as a veiled threat.

“Where there is no justice, there will be no peace. Soon the law of retaliation may very well be applied,” Farrakhan wrote, including the hashtag #Trayvon to clarify the subject of his angst. “Let us see what kind of justice will come for his bereaved family and our bereaved community.”

“The fruit of justice is peace. But justice is a principle of fair dealing,” he writes in another tweet. “When we fail to do justice, we literally set up conditions that destroy peace.” And in his most recent tweet, Farrakhan writes, “Think. Reflect. Then get up and do something for self or suffer the consequences.”

These messages follow a tweet that Farrakhan sent referencing text from a 2007 sermon. This same article is referenced on the front page of the Nation of Islam’s media outlet, The Final Call, as well. In the article, entitled, “Justifiable Homicide: Black Youth In Peril – Pt. 1,“ the minister claims that ”there has been a great display of anti-Black hatred in the United States of America” of late.

Additionally, he laments discriminatory actions against African Americans and claims that Black youths have not been informed of the price that their forefathers payed to give them their current lifestyles. Farrakhan uses the words “the enemy” to describe those educating Black youths and says that African Americans have suffered at the hands of “a wicked oppressor.”

Now the New Black Panther Party has put out wanted posters to their followers – Zimmeraman is wanted dead or alive: 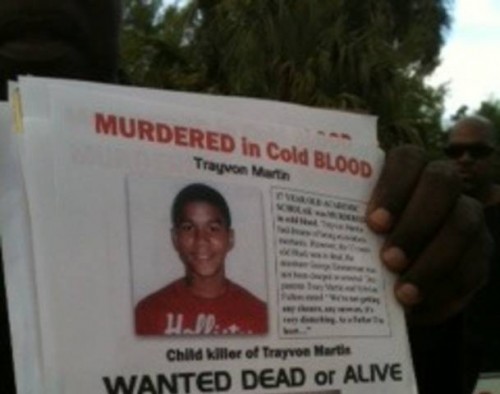 (AllVoices) — Yesterday afternoon at a press conference, the New Black Panther Party for Self-Defense circulated a “wanted dead or alive” poster for George Zimmerman for shooting to death a Florida teenager four weeks ago.

Zimmerman, a self-proclaimed neighborhood watch captain said he accosted what he alleges was a suspicious looking black male walking through his neighborhood. He further contends the man punched him, and bloodied his nose, so Zimmerman fired a gun shot striking the man in the chest. The “man” was 17 year old Trayvon Martin, who would lie in the county morgue three days before police alerted his parents of their child’s death.

Minister Mikhail Muhummud led the press conference, calling for the firing of Sanford Police Chief Bill Lee, the arrest of George Zimmerman and some involvement from President Obama. Muhummud stated he is the southern regional director for the New Black Panther Party for Self-Defense located in Jacksonville, Florida. While Minister Muhummud fired off a list of demands and expressed outrage over the handling of the shooting and subsequent investigation; a member of the group passed flyers to about 100 people who showed up for the press conference. Muhummud told the group he was not concerned with rumors of death threats to George Zimmerman, “He should be afraid for his life…”

So, we have ‘progressed’ from radical threats and barbs, to the call for violence in the streets and against one another. How very Cloward and Piven of them. And right on schedule for the chaotic spring descending on America as the Communists who are manipulating the political chess board in America and across the globe, begin to make their move to bring America to her knees. All of this can be laid squarely at Barack Obama’s feet. Future blood spilled because of this will be on his hands, count on it. He is egging it on – from WND:

Obama weighed in on the shooting Friday, saying the incident requires all Americans to “do some soul searching.”

“When I think about this boy, I think about my own kids,” he said. “I think every parent in America should be able to understand why it is absolutely imperative to investigate every aspect of this and that everybody pulls together – federal, state and local – to figure out exactly how this tragedy happened. But my main message is to the parents of Trayvon Martin: If I had a son he’d look like Trayvon. And I think they are right to expect that all of us as Americans are gonna take this with the seriousness it deserves and that we’re going to get to the bottom of exactly what happened.”

How touching. Obama self-identifying with a ‘designated’ victim without waiting for even the most basic of facts. Don’t expect a beer summit to come from this.

And the usual leftist instigators are chiming in – they cast themselves as men of God, while calling for violence, death and mayhem – I give you the Reverend Al Sharpton and Jesse Jackson – both consummate racists and Communists. They are leading the lynch mob mentality out there and it has nothing to do with race. It has everything to do with bottom up, top down, inside out…

All of this is nothing more than leveraging racism to induce chaos and to provide a gateway to full-blown Communism. They mean for us to beg them (the authorities) to make it stop, so they can bring the hammer down. The plan is in full swing and the chaotic dance has just begun to occupy the streets and bring America down. 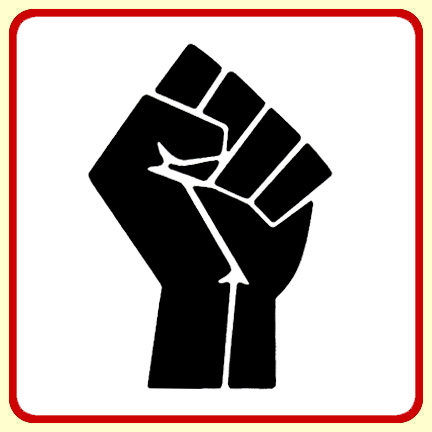 Update: Bookworm Room gets the big picture right again – The real message behind the race hustlers’ manipulation of the Trayvon Martin killing

27 thoughts on “Leveraging Racism for Chaos – Gateway to Communism”