Life, liberty and the pursuit of happiness… Treasured guarantees from the Declaration of Independence. Except that life depends on water and in a stealth power grab of staggering scope, governments and agencies have laid claim to the very rain itself.

This ties into the socialist precept that the government shall own the means of production, including the means of food production. If you are looking for the logical implication of Obama’s recent rant that “You didn’t build that!,” that the necessary components of anything you build or grow come from government, this is where you arrive.

It has always been the American ideal that you own land and all that is on it. It’s yours, not the government’s. That should include the water that is on that land or that falls on that land. But it would seem that Oregon is more in tune with state collectivism as Gary Harrington of Jackson County, Oregon found out the hard way recently. He owns 170 acres with 3 ponds on his land. Most of us would consider it a no-brainer that the water on his land was his to do with as he sees fit. Oregon has other ideas and is instituting water prohibition:

If you build a dam, an earthen dam, and interrupt the flow of water off of [YOUR OWN] property, and store that water that is an activity that would require a water right permit from us.

Under Oregon law, all water is publicly owned. With some exceptions, cities, farmers, factory owners, and other water users must obtain a permit or water right from the Water Resources Department to use water from ANY source…

Note: “publicly owned” means “not yours.”

For the heinous crime of water collection, Harrington has been sentenced to 30 days in jail and a $1500 fine. Why, how very, very Communist:

Communism, the political and economic doctrine that aims to replace private property and a profit-based economy with public ownership and communal control of at least the major means of production (e.g., mines, mills, and factories) and the natural resources of a society.

And lest you think this is just a whacky Oregon thing, think again. The EPA has gone insane with Communistic glee and is wreaking havoc across America with the help of Obama, the Progressives and their regulator minions. Indiana is our next stop:

There is a story in Net Right Daily about landowner, Dexter Lutter of Noble County, who thought he was cleaning up the water supply and creating a healthier environment for years to come. Instead, he is facing hundreds of thousands of dollars in fines from the EPA, whose main goal is complete control over all land, air and water.

His crime? Check it out on Net Right Daily, excerpted below:

…A small manmade open ditch ran through Lutter’s property in Noble County, Ind. It was in need of repair, and Lutter got permission from his county to place tile drains for the collection of the agricultural discharge and cover over the eroding open ditch. This not only saved county taxpayer dollars, but also cleaned up the water supply and prevented further soil erosion.

But that doesn’t matter. According to Noble County and Lutter, they were told they violated the Clean Water Act. This is despite the fact that Lutter said the ditch was manmade and used only for agricultural discharge and did not impede the flow of any main waterways — usual exemptions under the Clean Water Act.

It seems both the EPA and Army Corps are no longer content just monitoring activity in “navigable” waterways—as stated in the Clean Water Act, which has commonly lent itself to waterways where a vessel could in fact, navigate. These agencies seem to think they need to adopt a different interpretation of the law, which gets them another step closer to controlling all water in the U.S…

Mr. Lutter now faces the loss of his business thanks to the overreach of the EPA. 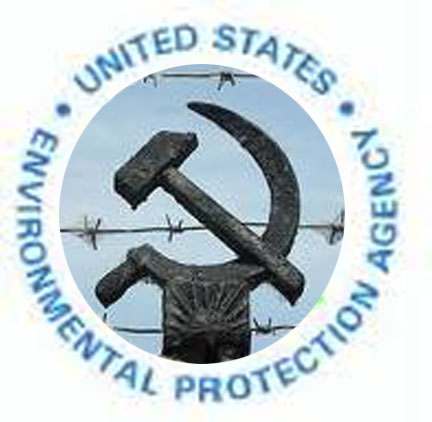 In fact, Obama is seizing western water supplies now. Didn’t hear about that? Not surprised, the lamestream media is not covering it (well, maybe covering for the administration or covering up criminal overreach, but not covering the story). But just because you can’t see a terrorist, it doesn’t mean he hasn’t been busy. Now the EPA and the feds are brandishing lawsuits which, if won, will award them future water rights of states – starting with New Mexico. Control the water, control the food, control the people. Ask Mao, Lenin or any other dictator. If people won’t comply, starve them out. Think it can’t happen here? It’s already started.

The lawyers told the committee the U.S. government is apparently trying to take over legal management of the state’s water supply. The federal government has asserted claims for damages to groundwater in a natural resource damage case in New Mexico involving Chevron/Molycorp. The claim seeks for those damages to be awarded in the form of future water rights management.

The federal government’s lawsuit has caught the attention of the Western Governors’ Association.

“Claims by federal trustees of this nature are unprecedented and are of great concern to the Western states,” said Pam O. Inmann, executive director of the Western Governors’ Association, in a letter to Tom Vilsack, secretary of the U.S. Department of Agriculture, and Ken Salazar, secretary of the U.S. Department of the Interior. “…The ramifications of such legal position extend to the very heart of the Western states exclusive ownership and/or management and control of the groundwater resources within their respective boundaries.”

Perhaps a refresher of where this came from (other than Karl Marx) is in order:

Weekly Enewsletter: An Executive Order You Should Know About

With all that is going in Washington these days some things don’t make the news the way they should. Fourteen days ago President Obama issued an Executive Order that you should know about. This order gives an unprecedented level of authority to the President and the federal government to take over all the fundamental parts of our economy – in the name of national security – in times of national emergency.

This means all of our water resources, construction services and materials (steel, concrete, etc.), our civil transportation system, food and health resources, our energy supplies including oil and natural gas – even farm equipment – can be taken over by the President and his cabinet secretaries. The Government can also draft U.S. citizens into the military and force U.S. citizens to fulfill “labor requirements” for the purposes of “national defense.” There is not even any Congressional oversight, only briefings are required.

By issuing this as an Executive Order the President puts the federal government above the law, which, in a democracy, is never supposed to happen.

As President and Commander in Chief of the Armed Forces, he has the Constitutional authority to issue executive orders. And while similar orders have been made before by presidents from Eisenhower and Reagan to Clinton and George Bush – it has never been done to this extent.

It is still unclear why this order was signed now, and what the consequences are for our nation – especially during times of peace. This type of Martial Law imposes a government takeover on U.S. citizens that is typically reserved for national emergencies, not in a time of relative peace.

I want you to know I am following this very closely. If you would like to read the order for yourself please click here.

We said this was incredibly bad when Obama signed it and now you are beginning to see what he has in mind for us. Want more? Well, let’s take a stroll all the way back to 2007 shall we? From Maggie’s Notebook:

In 2007 the EPA and the Department of the Army “clarified” the definition of “Waters of the United States,” as such:

1. All waters which are currently used, or were used in the past, or may be susceptible to use in interstate or foreign commerce, including all waters which are subject to the ebb and flow of the tide;
2. All interstate waters including interstate wetlands;
3. All other waters such as intrastate lakes, rivers, streams (including intermittent streams), mudflats, sandflats, wetlands, sloughs, prairie potholes, wet meadows, playa lakes, or natural ponds, the use, degradation or destruction of which could affect interstate or foreign commerce including any such waters:
4. (i) Which are or could be used by interstate or foreign travelers for recreational or other purposes; or
(ii) From which fish or shellfish are or could be taken and sold in interstate or foreign commerce; or
(iii) Which are used or could be used for industrial purposes by industries in interstate commerce;
5. All impoundments of waters otherwise defined as waters of the United States under this definition;
6. Tributaries of waters identified inparagraphs (s)(1) through (4) of this section;
7. The territorial sea;
8. Wetlands adjacent to waters (other than waters that are themselves wetlands) identified in paragraphs (s)(1) through (6) of this section; waste treatment systems, including treatment ponds or lagoons designed to meet the requirements of CWA (other than cooling ponds as defined in 40 CFR 423.11(m) which also meet the criteria of this definition) are not waters of the United States.

Then there is this notation at the bottom of the list:

Under Russ Feingold’s bill, the WATERS OF THE UNITED STATES were defined as follows:

(25) WATERS OF THE UNITED STATES- The term `waters of the United States’ means all waters subject to the ebb and flow of the tide, the territorial seas, and all interstate and intrastate waters and their tributaries, including lakes, rivers, streams (including intermittent streams), mudflats, sandflats, wetlands, sloughs, prairie potholes, wet meadows, playa lakes, natural ponds, and all impoundments of the foregoing, to the fullest extent that these waters, or activities affecting these waters, are subject to the legislative power of Congress under the Constitution.’.

Feingold was forced to defend his legislation against claims that croplands could be considered Waters of the United States. Feingold denied it – said his bill exempted all agricultural lands, but Senator Ron Wyden (D-OR) was not convinced. Today, IBD quotes Congressman Frank Lucas (R-OK):

House Agricultural Committee Chairman Frank Lucas, R-Okla., says the expanded EPA guidelines would let the government “regulate essentially any body of water, such as a farm pond or even a ditch.” A bipartisan group of 170 congressmen wrote a letter to the EPA and the Army Corps of Engineers urging them not to issue the expanded guidelines.

The American Farm Bureau Federation said in a statement that the guidelines “take an overly broad view of ‘waters of the U.S.’ It would serve as a road map for EPA and the Corps to designate nearly all water bodies, and even some on dry land, as subject to federal regulations that dictate land-use decisions.”

Do you see how they are carrying this out now? Where does it stop? Now they own the real estate, the mineral rights, the water… Next stop, the air – and I am not kidding. Thought you were safe because Cass Sunstein leaving would save us? Think again… Someone worse awaits in the wings of the White House – Soviet born Boris Bershteyn. Sponsored and brought to you by Paul Soros – yes, that Soros. The older brother of George Soros. Sigh.

So, while Oregon is experiencing the new “prohibition” and becomes a “dry state,” the rest of the country is ceding the new gold, water, to the federal government and the EPA.

Do you recognize your country any more?