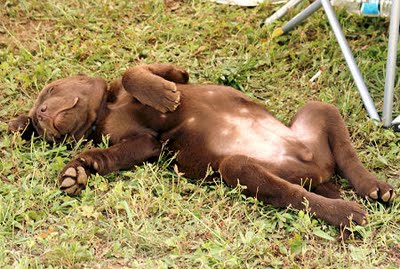 Ah, the sultry lazy days leading up to the end of summer, when the warm weather brings out the torpor and laziness in all of us and little gets accomplished except by the determined and the desperate.

Of course, in this election season, that group would include the members of the political class and a veritable army of consultants, pollsters, advance men, hangers on, campaign workers, body servants, soundmen, lighting directors, you name it. Just the thought of it reminds me of the old touring days, slogging down the highway to the next town… an unnatural way to live, but the common lot of political junkies, musicians, carnies and con men always on the way to the next gig, the next score…

The Romans were the first to label this time of year the Dog Days (diēs caniculārēs), noting that the skies were ruled by Sirius, the Dog Star, the brightest star in the night sky at this time of year.

Welcome to the Watcher’s Council, your weekly magazine of the blogosphere, put out by a blogging group consisting of some of the most incisive, well written blogs around and the longest running group of its kind in existence. Every week, the members nominate two posts each, one written by themselves and one written by someone from outside the group for consideration by the whole Council. Then we vote on the best two posts, with the results appearing on Friday.

This week, Right Truth, Ask Marion and The Pirate’s Cove took advantage of my generous offer of link whorage and earned honorable mention status with some excellent work.

Simply head over to Joshuapundit and post the title and a link to the piece you want considered along with an e-mail address (which won’t be published) in the comments section no later than Monday 6 PM PST in order to be considered for our honorable mention category.

Then simply return the favor by creating a post on your site linking to the Watcher’s Council contest for the week when it comes out every Wednesday morning.

By: Daniel Graeber of Oilprice.com

The Association of American Railroads reports the number of rail tankers carrying crude oil and petroleum products in the United States increased more than 35 percent during the first six months of the year when compared with 2011. After the U.S. Energy Department, in its report, noted the lack of pipeline infrastructure in North Dakota, British supermajor BP announced it was considering rail to bring oil from the Bakken formation there to its refinery in Washington state. In terms of the environmental footprint, meanwhile, rail deliveries account for less than 1 percent of the total emissions from the transportation sector. These findings come even though rail shipments are three times more expensive than pipeline deliveries

The AAR finds that 241,000 rail tanker cars hauled oil during the six-month period ending in June, a 38 percent increase over the same period in 2011. For June, rail deliveries increased 51 percent over their 2011 levels for the month. Each rail tanker carries around 700 barrels of oil, meaning June deliveries translated to nearly 1 million barrels per day. The U.S. Energy Department’s Energy Information Administration attributes much of the increase in rail deliveries to the oil boom under way in North Dakota, which in March became the second-largest oil producing U.S. state. Oil producers in the region, however, rely on rail to get oil out of the region and BP this week said it was considering a rail project to bring Bakken crude to its 225,000-bpd refinery in Washington. The permitting process could begin as early as next month.

Rail deliveries, however, cost, on average, $15 per barrel compared with the $5 per barrel for deliveries through pipeline systems. On the other hand, the rail system is getting less energy intensive. While the transportation sector accounts for about 25 percent of the global energy-related carbon dioxide emissions, rail represents a minor fraction of that total. Across the board, emissions for transportation are increasing in every sector except rail, which accounts for less than 1 percent of total CO2 emissions for the sector.

When completed, the entire Keystone oil pipeline network could carry about 1.1 million bpd compared with the same approximate total for the entire United States for rail. The 3,100-mile Enbridge Pipeline System, which stretches from the Athabasca oil sands facilities in Alberta to oil refineries in the Midwest, can carry, on average, 1.4 million bpd. The week before last, however, more than 1,000 barrels oil spilled from a section of that pipeline in Wisconsin. While Enbridge said much of the release was contained, the incident occurred one day after the two-year anniversary of the costliest onshore crude oil spill in U.S. history from a section of the same pipeline network. Though in terms of volume, pipeline transportation has proved its merit, the move by BP in the Bakken formation suggests rail transit remains a viable option for the industry.

By: Daniel Graeber of Oilprice.com