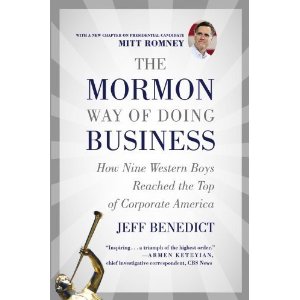 Covering everything the 9/11 terror attacks to how Mormon missions prepared these leaders for business, this film is candid, emotional and incredibly inspiring. Whether a business student, a working parent or a CEO, you will never look at business the same way after watching this. www.jeffbenedict.com

Fair warning here, parts of my family are LDS and personally, I think they are some of the finest people on the planet. So, I’m biased… It’s my blog (she said smiling). They are the salt of the earth, intensely in love with God and morally upright. If a man or woman is to be judged on their character, then, aside from a few notable exceptions such as Harry Reid (Hey, who doesn’t have a rotten apple in the barrel? He can take it up with God when he meets his Maker.), the Mormons are in my opinion good people.

The Mormon Way of Doing Business is a great read. It highlights that through love of God and a desire to do the right, moral thing, you can be very, very successful. You don’t have to be corrupt or evil to be a success and be wealthy. That’s a myth. The Mormons have produced many, many successful business people. Here’s a short list:

Guess what all of them have in common? Check it out:

Each successful business person of this faith worked their tail off, I guarantee it. In the beginning they did without and they were and still are humble. You see it’s all about character. And whether people want to hear it or not, Mormons are just regular people. Their biggest difference is their work ethic and their devotion to God. So, I have no time for anti-Mormon jokes or hate. I know goodness when I see it and it is ingrained in the Mormon faith.

They do differ in a few ways: they don’t drink, they stay married on the whole for a lifetime. They have large families and they store food and staples. And they are happy.

As far as business, you will see Mormons heavily in business disciplines and high tech. But you can find them in all fields, quietly working away. They remind me of the parable of the ant and the grasshopper. Guess which one they are?

There is a ton to learn on business, faith and family from this book. I wish my son would read it. The book was first written in 2007, but is timeless for anyone wanting to succeed whether you are Mormon or not. No religion guarantees success, but hard work, perseverance and solid determination make your odds pretty good.

This book is not an expose on these men, their companies, or the Mormon Church. Rather, the book examines what makes these executives tick and reveals their habits and secrets to success.

While you may not share the religious beliefs of Mitt Romney, he is a good man I believe. The same cannot be said for the Marxist in the White House currently. Given the choice, I’ll go with the God-fearing, moral Mormon and ditch the Marxist. I plan on reading this book once a month for a year, that’s how impressed I am with it. It has a permanent place on my nightstand. Buy it, read it and whatever your age, apply the principles to your life.