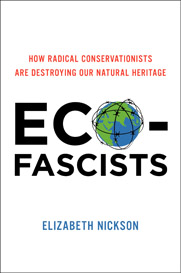 Want a personal account of how Obama’s EPA and government goons have truly screwed up someone’s life? Look no further than Elizabeth Nickson who has written a great book: Eco-Fascists – How Radical Conservationists Are Destroying Our Natural Heritage. She just wanted to build a house on her 28 acres – but environmentalists stepped in and so began her nightmare and her research.

Forty million Americans have been driven from their lands and rural culture is being systematically crushed, even as wildlife, forests, and rangelands are dying. Journalist Elizabeth Nickson’s investigations into these events have revealed a shocking truth: rather than safeguarding our environment, radical conservationists are actually destroying our natural heritage. In Eco-Fascists, Nickson documents the destructive impact of the environmental movement in North America and beyond, detailing the extreme damage environmental radicals in local and national government agencies are doing to the land, the ecosystems, and the people. Readers of Alston Chase’s Playing God in Yellowstone and In a Dark Wood, and anyone who is deeply concerned about global warming and the environment must read Elizabeth Nickson’s Eco-Fascists.

An investigative reporter documents the destructive impact of the environmental movement in North America and beyond.

When journalist Elizabeth Nickson sought to subdivide her twenty-eight acres on Salt Spring Island in the Pacific Northwest, she was confronted by the full force and power of the radical conservationists who had taken over the local zoning council. She soon discovered that she was not free to do what she wanted with her land, and that in the view of these arrogant stewards it wasn’t really hers at all. Nickson’s long, frustrating, and eyeopening encounter with these zealots started her on a journey to investigate and expose the hugely destructive impact of the environmental movement on ordinary people and communities across North America—and the world.

What she discovered is shocking. Forty million Americans have been driven from their land, and rural culture is being systematically crushed, even as wildlife, forests, and rangelands are dying. In Eco-Fascists, Nickson explores how environmental radicals have taken over government agencies at the local, state, and federal levels. The result? A wholesale sequestration of forest, range, and water—more than 40 percent of North America—impoverishing us all, especially the most vulnerable. This confiscation of America’s natural heritage is a major factor contributing to our current economic decline; until it is acknowledged and addressed, our economy will not recover.

Nickson traces the tens of billions of dollars environmental nonprofits marshal every year to promote the notion that our essential natural systems are collapsing, and finds, in a brutal example of self-fulfilling prophesy, that their corrupted science is desertifying the heartland. She visits once-thriving communities that are turning to ghost towns because environmental legislation has forced mines, ranches, and mills to close and has forbidden critical forest, range, park, and wilderness maintenance.

Eco-Fascists exposes the major fallacies of the environmental movement—from wildlife protection to zoning to forest-fire management—and introduces us to the individuals who are fighting back. Fast-paced, highly accessible, and sure to be controversial, this is a work that will change the national conversation about environmental protection and its impact.

Cass Sunstein, is that you? And any number of other Marxist regulators in our government. This is a great book, especially if you want to know how the environmental whackadoos are impacting our lives, our country and our constitutional rights. This is a big deal in Idaho, where I live as well as most other states. Get Eco-Fascists and read and study it. Forewarned is forearmed.