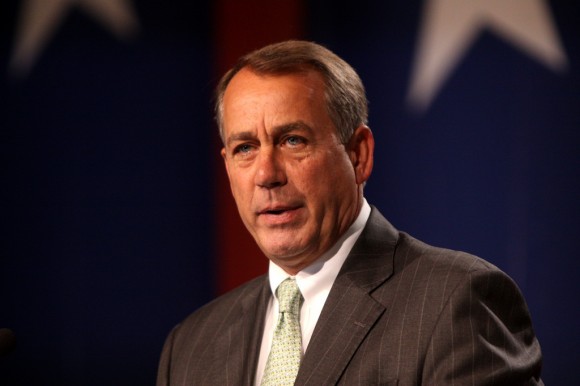 Mostly with Democratic votes, the Republican-controlled House of Representatives on Tuesday voted for what the Obama Administration said was “the most progressive income tax code in decades.” It was Karl Marx who called for a “heavy progressive or graduated income tax” system in order to redistribute the wealth and establish a socialist state.

The bill was brought to the floor by Republican House Speaker John Boehner, who voted for it, without a spending cut amendment. He says he will seek “entitlement reform and pro-growth tax reform” sometime later this year.

The vote in favor of passage of the tax increase bill was 257-167, with 85 Republicans joining 172 Democrats in the affirmative. A total of 151 Republicans and 16 Democrats voted against.

The liberal media will scoff at the idea that the House voted for Marxism. But a classic John Chamberlain article in The Freeman notes that Karl Marx and Frederick Engels, in the Communist Manifesto, had advocated a heavy progressive tax as a means of despoiling the “bourgeoisie” and “softening middle class society up for the dictatorship of the proletariat.” Marx understood how class envy and jealousy could serve as the basis for the seizure and maintenance of political power.

Scottish economist Ramsay McCulloch said in 1845: “The moment you abandon . . . the cardinal principle of exacting from all individuals the same proportion of their income or their property, you are at sea without rudder or compass and there is no amount of injustice or folly you may not commit.”

That principle is tax equity. As noted by Chamberlain, “a rich man would pay more taxes than a poor man, naturally. But every dollar of assessed property value, or of income, or of spending, would be taxed in equal amount, at flat percentage rates. Dollars would be treated equally, no matter who owned them, or spent them. Thus the citizens would be accorded the ‘equal protection of the laws’ — and their ‘privileges and immunities’ would be equal, as provided for in the United States Constitution. Any other way of treating taxation was regarded as discriminatory, or as putting penalties on ability, ambition, and success.”

Obama and his administration understand precisely what they have achieved and, more importantly, what they forced 85 House Republicans, including Speaker John Boehner, to accept. An Obama administration “fact sheet” declared, “for the first time in 20 years, Congress will have acted on a bipartisan basis to vote for significant new revenue.” The left-leaning Politico trumpets the news: “GOP anti-tax policy goes over the cliff.”

Not only do we now have “the most progressive income tax code in decades,” but the bill that is now law does not include an extension of the payroll tax “holiday.” This means about $1,000 a year for an average worker.

In a story headlined, “Bigger Tax Bite for Most Under Fiscal Pact,” the New York Times confirms that about 77 percent of households would pay a larger share of income to the federal government this year, and that the legislation is expected to reduce economic growth by as much as 1 percent in the first quarter of 2013.

Zubi Diamond, author of Wizards of Wall Street, tells AIM, “If you are unemployed, or behind in your mortgage, or struggling to pay your bills, or your home is underwater, this is not going to change your situation for the better. If anything, it will make it worse.”

Diamond, a successful businessman and stock market investor and trader, came from Africa to the U.S. to seek the American dream. He says Obama’s attacks on the capitalist system are succeeding because people do not realize that Obama’s allies in the hedge fund industry were behind the economic collapse in 2008 that led to his election and that they continue to rig and “loot” the system.

“The perceived unfairness or imperfection associated with capitalism in America today is because of the parasitic anti-capitalist hedge fund short sellers on Wall Street, who are members of the Managed Funds Association,” he argues. “They hide in the body of our capitalist society, and suck the life and liquidity out of our economy by fraud and manipulation.”

Diamond predicts a “double dip” recession that he sees as part of a strategy “to cut America down to size, in order to achieve a global balance of power” that will diminish America’s economic and military clout.

Some experts, however, think that more printing of money by the Federal Reserve will keep the appearance of an economic recovery going.

Christopher T. Mahoney, who retired from Moody’s in 2007 after 30 years on Wall Street, expects to see the Dow around 15,000 by next Christmas. He says the Fed’s balance sheet should grow by $1 trillion next year, a 36% increase over where it is now.

In his “Capitalism and Freedom” blog, he says, “The money supply (M2) has grown by almost $3 trillion since the crash, for a total growth of 40%. Since the crash, nominal GDP has grown from $14 trillion to $16 trillion, an increase of 14%. The Fed’s plan is that by growing the monetary base by about a third in 2013, nominal growth will accelerate to a level that would allow unemployment to decline from its current 7.8% to a targeted 6.5%.”

For his part, Obama said the legislation which passed the Senate and then the House “enshrines, I think, a principle into law that will remain in place as long as I am President: The deficit needs to be reduced in a way that’s balanced. Everyone pays their fair share. Everyone does their part. That’s how our economy works best. That’s how we grow.”

Commonly accepted definitions of “enshrine” include “to enclose in or as if in a shrine” and “to cherish as sacred.”

Neil Munro of the conservative Daily Caller wrote an article interpreting these remarks to mean that Obama will demand another tax increase for 2013. But Obama did not say how much more “heavy” or “graduated” the progressive income tax should be.

In France, where they have an explicitly socialist government, a proposed 75 percent income tax rate on the rich was struck down as “a breach of equality of taxes” and ruled to be unconstitutional.