There’s a news article by Mark Sappenfield shown on the Yahoo news page, originally posted to the Christian Science Monitor, regarding a police officer who was fired from his department for bringing targets that looked like Trayvon Martin to the pistol range. According to the latest version of the story the targets were intended to be used for “no-shoot training aids.”

“Now, the officer has responded in an online video, suggesting that he brought the pictures as a “no-shoot training aid,” and that he might be a pawn in a broader conspiracy to bring down the chief of the Port Canaveral Police Department.”

If the target had the name Trayvon Martin printed on the hoodie or perhaps an exact likeness of his face then perhaps the department can make a case against the officer. That said; what about Homeland Security ordering “non-traditional threat” targets of pregnant women, old retired men with shot guns and other civilian settings which are to be used in training police officers to shoot their fellow citizens?

Should we fire anyone with Homeland Security associated with the purchase of “non-traditional threat” targets on the basis their presence is politically incorrect, just as the Port Canaveral Police Department believes a target of an individual resembling Trayvon Martin is a rather poor choice and shows a lack of common sense? Just wondering. 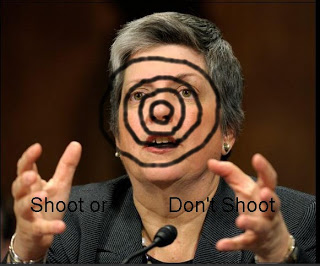 Would anyone be offended if folks started using targets that resembled, let’s say, Janet Napolitano at the local pistol range? Would a team of FBI agents show up at your door to haul you away or would the secret police squad from Homeland Security handle that?

I remember a scene from an old Jack Lemon movie, How to Murder Your Wife; the scene where Lemon’s character, acting as his own defense attorney, draws a chalk dot on the railing and suggests to his hen pecked friend, “All you have to do is push that button… nobody will know it was you that pushed the button…”

Would anyone really use a target of Janet Napolitano at the pistol range, or substitute some other notable figure? Just putting the thought down in writing will set off alarms in that fancy new information gathering unit out in the desert. Is that a helicopter hovering over my house and would somebody see who’s at the door pounding away?