This Memorial Day weekend 2012, we turn to God and give rememberance to those who have died for our country. Freedom is not free.

Memorial Day, originally called Decoration Day, is a day of remembrance for those who have died in our nation’s service. There are many stories as to its actual beginnings, with over two dozen cities and towns laying claim to being the birthplace of Memorial Day.

There is also evidence that organized women’s groups in the South were decorating graves before the end of the Civil War: a hymn published in 1867, “Kneel Where Our Loves are Sleeping” by Nella L. Sweet carried the dedication “To The Ladies of the South who are Decorating the Graves of the Confederate Dead” (Source: Duke University’s Historic American Sheet Music, 1850-1920). 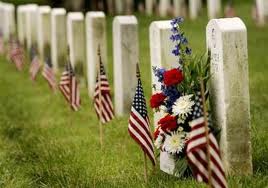 While Waterloo N.Y. was officially declared the birthplace of Memorial Day by President Lyndon Johnson in May 1966, it’s difficult to prove conclusively the origins of the day. It is more likely that it had many separate beginnings; each of those towns and every planned or spontaneous gathering of people to honor the war dead in the 1860’s tapped into the general human need to honor our dead, each contributed honorably to the growing movement that culminated in Gen Logan giving his official proclamation in 1868. It is not important who was the very first, what is important is that Memorial Day was established. Memorial Day is not about division. It is about reconciliation; it is about coming together to honor those who gave their all. Read More…

Remember the fallen, from Normandy to Pearl and all the many wars and battles that have kept our country free.

he following prayer is offered by James Simpson:

This is the day we remember those who have fallen in battle, thereby making the supreme sacrifice in service to our great nation. Too many of us don’t fully recognize what this day symbolizes. So I am offering a Memorial Day prayer, both to give my thanks and hopefully help us all be a little more appreciative. Here it is:

I pray for the fallen, those brave souls who gave their all for this country, never flinching from their duty, whatever they were called to do, and whether the leadership decisions that brought them to their last mission were well considered or not. They have given all they had, without question.

But I pray especially for the fathers and sons, mothers and daughters of these fallen princes, for they have to live on without, and doubtless would have taken their place without question, even if only to save themselves from such unbearable pain. Nothing can compare to the suffering endured by a mother who loses her child, or a child who loses his mother or father before their time. The fallen sacrifice their lives; the family sacrifices the rest of their lives. They will never see what their beloved’s life could have become, will no more share life’s trials and triumphs with them, never again see their smile or share their warmth on a cold winter’s night. They live in a sea of grief and will carry that wound for eternity. So, please God, bestow Your Tenderness and Grace especially on these families, whose loss can never be repaid.

But God, I pray also for the rest of us, for we lose too. We lose what could have been, from among the most selfless, principled, promising souls of our living generations. I would gladly exchange any ten Harvard graduates for one serviceman who willingly walks at the knifepoint. He has more guts, more integrity, more fortitude and likely more resourcefulness than the lot of them combined.

So, God, please let not their ultimate sacrifice be in vain. See to it that the objectives they were deployed to obtain are achieved. See to it that we have the satisfaction of realizing their missions successfully concluded. God, preserve this country for which they gave their lives, and give us all the wisdom, humility, and virtue to fully comprehend and gratefully acknowledge their sacrifices for what they are; for “Greater love hath no man than this, that a man lay down his life for his friends.” (John 15:13).