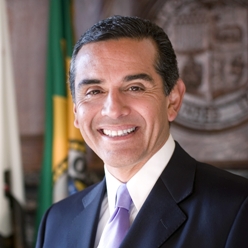 Antonio Villaraigosa, aka Tony Villar, is Mayor of Los Angeles.

In 2005, with the support of a Marxist led citywide coalition, Antonio Villaraigosa became the first Latino Mayor of Los Angeles since 1872. Before his election, he was a City Councilman and Speaker of the California State Assembly.

Villar went to East Los Angeles College and then transferred to UCLA, where he became active in MEChA, a radical Chicano separatist group with a strong Marxist-Leninist underpinning.

Villaraigosa then turned his organizing skills to the union movement. As shop steward for a local representing federal civil rights lawyers, he found an L.A. office where just a quarter of the attorneys were organized and enrolled nearly 90 percent of them in the union. He soon went on the staff of UTLA, Los Angeles’ teachers union, and when the union struck the school district in 1989, Villaraigosa was given the task of building strike support in South-Central — which, through an ambitious program of house meetings, he did. In 1994, he was elected to the California Assembly.

In 2001, Los Angeles organized labor was so enamored with Villaraigosa, they backed him over an incumbent pro-labor Democrat.

Senator Barbara Boxer, Governor Gray Davis and retiring mayor Richard Riordan, all endorsed Antonio Villaraigosa’s bid for the Los Angeles mayoralty, but he failed. In 2005, he was back with an even stronger radical coalition and this time he won.

“We are going to organize families and work together to elevate the quality of life of this district,” said an emotional Antonio Villaraigosa to hundreds of labor union and community supporters who filled the Plaza del Sol hall in Boyle Heights, a working class, Mexican American and immigrant community. “This victory clearly says that we will not be forgotten. We are human beings and we deserve respect,” he continued as volunteers cheered, cried and chanted, “Si se puede!”

“This is just the beginning,” said the jubilant Miguel Contreras, pro-Marxist Executive Secretary Treasurer of the Los Angeles County Federation of Labor, who chaired the election night celebration.

Some 2,000 Latino leaders and activists from throughout the United States met in Los Angeles at the Latino Congreso 2007, to map an action plan and social justice program for the 2008 elections. Their goal was to bring out 10 million Latino voters who can play a decisive role in the presidential and congressional elections.

Los Angeles Mayor Antonio Villaraigosa said Latinos should take a leading role to end the war, as “we are 14 percent of the population with 20 percent of the casualties.”

“It is time to bring the troops home,” he said.

Villaraigosa also called for a broad coalition to win just immigration reform, saying, “No group can do it alone,” and a national campaign to combat poverty.

Formerly Hillary Clinton’s campaign Co-Chair, the appointment of Villaraigosa was seen as a unifying move, a nod to Clinton Democrats, to Latino voters and to Los Angeles, California and the West Coast.

In September 2009, Antonio Villaraigosa was Chairman of the Democratic National Convention.

On February 22, 2012, Obama for America announced the selection of the campaign’s National Co-Chairs, a diverse group of leaders from around the country committed to re-electing President Obama. The Co-Chairs would serve as ambassadors for the President, advise the campaign on key issues and help engage and mobilize voters in all 50 states.

Antonio Villaraigosa, Mayor of Los Angeles, was on the list.