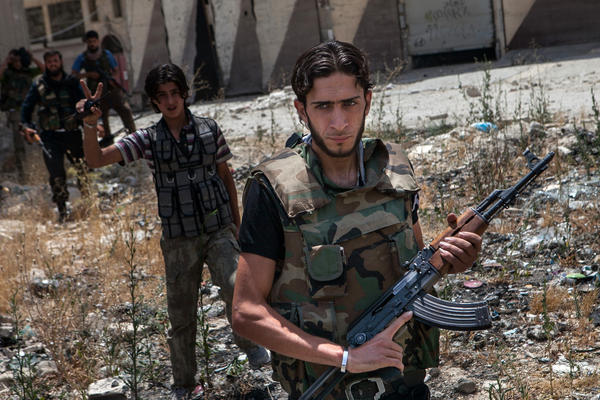 And now, for your morning cup of nuts via Doug Ross:

President Obama waived a provision of federal law designed to prevent the supply of arms to terrorist groups to clear the way for the U.S. to provide military assistance to “vetted” opposition groups fighting Syrian dictator Bashar Assad.

Some elements of the Syrian opposition are associated with radical Islamic terrorist groups, including al Qaeda, which was responsible for the Sept. 11 attacks in New York, Washington, D.C., and Shanksville, Pa., in 2001. Assad’s regime is backed by Iran and Hezbollah.

The president, citing his authority under the Arms Export Control Act, announced today that he would “waive the prohibitions in sections 40 and 40A of the AECA related to such a transaction.”

“Vetted?” You mean your buds the Muslim Brotherhood and al Qaeda who killed almost 3,000 Americans on 9-11, right? The same terrorists who are murdering Christians in Syria and burning down churches.

Not only is waiving the ban a violation of the Patriot Act and American law, it is a violation of international terrorism and trafficking laws and as Judge Napolitano quite astutely pointed out last week, it potentially makes Obama a war criminal.

Since when does the Executive Branch have the power and jurisdiction to just waive federal law when it doesn’t suit their agenda? Well, since we put a dictator into place evidently.

Those two sections prohibit sending weaponry to countries described in section 40(d): “The prohibitions contained in this section apply with respect to a country if the Secretary of State determines that the government of that country has repeatedly provided support for acts of international terrorism,” Congress stated in the Arms Control Export Act.

The law allows the president to waive those prohibitions if he “determines that the transaction is essential to the national security interests of the United States.”

Under section 40(g) of the AECA, the Obama team must also provide Congress — at least 15 days before turning over the weapons — “the name of any country involved in the proposed transaction, the identity of any recipient of the items to be provided pursuant to the proposed transaction, and the anticipated use of those items,” along with a list of the weaponry to be provided, when they will be delivered, and why the transfer is key to American security interests.

“Our intelligence agencies, I think, have a very good handle on who to support and who not to support,” Corker said. “And there’s going to be mistakes. We understand some people are going to get arms that should not be getting arms. But we still should be doing everything we can to support the free Syrian opposition.”

This isn’t an ‘oopsy!’ mistake you idiots. The enemy of your enemy is not your friend – the arab scholar who coined that phrase was beheaded by the way. Obama’s globalist reset agenda is right on track and the insanity it unfolds is to die for.

9 thoughts on “Insanity: Arming the Enemy of Our Enemy Who IS Our Enemy”