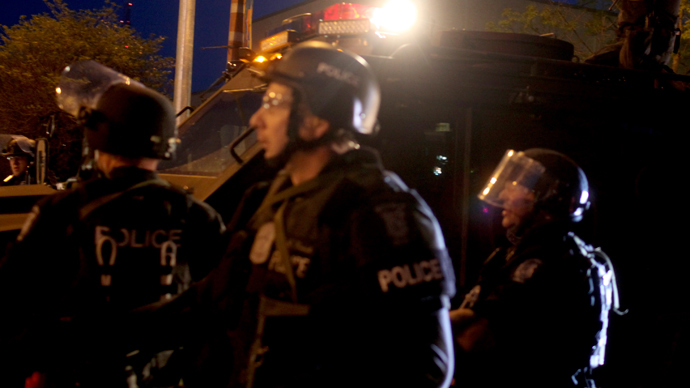 Behold the American Gestapo enabled by small white boxes that create a surveillance network that would have done the Stasi proud. Adorned with antennas and attached to utility poles, these boxes are about to make privacy a thing of the past and Seattle is certainly the testing ground for the surveillance state on steroids. But the citizenry are not quite the sheeple that the government had hoped for and they overwhelmingly became enraged over this massive intrusion. So, in a gesture (akin to flipping the bird) of feigned goodwill to placate the masses, the powers-that-be have deactivated the surveillance system — for now:

Police in Seattle, Washington have responded to a major public outcry by disabling a recently discovered law enforcement tool that critics said could be used to conduct sweeping surveillance across the city.

Last week, Seattle’s The Stranger published an in-depth look at a little known new initiative taking place within the city that involved the installation of dozens of devices that would create a digital mesh network for law enforcement officers. The devices — small white-boxes equipped with antennas and adorned on utility poles — would broadcast data wirelessly between nodes so police officers could have their own private network to more easily share large amounts of data. As The Stranger pointed out, however, those same contraptions were able to collect data on internet-ready devices of anyone within reach, essentially allowing the Seattle Police Department to see where cell phones, laptops and any other smart devices operating within reach were located.

After getting caught with their mitts in the constitutional cookie jar, the police declared “my bad” and said they did not have any bad intentions. Really? Because I seem to remember the NAZIs making similar claims just before they exterminated millions. But wait, they are not done yet… they have only deactivated the system until a ‘proper policy’ can be adopted by the city. I bet:

“The wireless mesh network will be deactivated until city council approves a draft policy and until there’s an opportunity for vigorous public debate,” Police Chief Jim Pugel told The Stranger for an article published late Tuesday.

“Our position is that the technology is the technology,” Whitcomb said, “but we want to make sure that we have safeguards and policies in place so people with legitimate privacy concerns aren’t worried about how it’s being used.”

Where vigorous debate is getting permission to ask a question if you can speak at all. More likely it will be the Politburo debating itself and deciding just how blatantly they will violate everyone’s rights. Comrades! Welcome to the new Amerika!!

What’s more, the claims of ‘deactivation’ are suspect to say the least:

The SPD told The Stranger previously that the system was not being used, but anyone with a smart phone who wandered through the jurisdiction covered by the digital nodes could still notice that their devices were being discovered by the internet-broadcasting boxes, just as a person’s iPhone or Android might attempt to connect to any network within reach. In theory, law enforcement could take the personal information transmitted as the two devices talk to each other and use that intelligence to triangulate the location of a person, even within inches.

When the SPD was approached about the system last week, they insisted that it wasn’t even in operation yet. David Ham of Seattle’s KIRO-7 News asked, however, how come “we could see these network names if it’s not being used?”

“Well, they couldn’t give us an explanation,” Ham said at the time.

“They now own a piece of equipment that has tracking capabilities so we think that they should be going to city council and presenting a protocol for the whole network that says they won’t be using it for surveillance purposes,” Jamela Debelak of the American Civil Liberties Union told the network.

Now just days later, the SPD has admitted to The Stranger that indeed the mesh network was turned on — it just wasn’t supposed to be.

“SPD maintains it has not been actively using the network — it was operational without being operated, having been turned on for DHS grant-mandated testing and then never turned off — so shutting it down won’t hamper any current SPD activities,” The Stranger reporter.

According to The Stranger, the SPD will begin disabling the system immediately, although Whitcomb said it involves “more than just flipping a switch.”

Naughty, naughty fascists! So, it was operational without being operated? The IT version of “I did not have sex with that woman?” Lame. And I strongly doubt that this system will be dismantled. It might be repackaged and redeployed in a manner not so obvious, but it will not go away. It’s the wave of a future ‘controlled’ America.

If this is Seattle’s gesture of good will to the citizenry, I’d hate to see what they do when they actually suppress the masses. I hate it when I find myself agreeing with the communist founded ACLU, but here I am:

“In a democratic society you should be able to move freely without law enforcement tracking your movements unless they have reason to believe you’re doing something wrong,” ACLU communications director Doug Honig said last week.

The gesture Seattle is making to the citizenry is not a mea culpa. These boxes in one form or another will now start showing up all over the country as our constitutional rights are trashed once and for all and a full blown despotic government descends.

22 thoughts on “Seattle Makes a Gesture to the Citizenry”