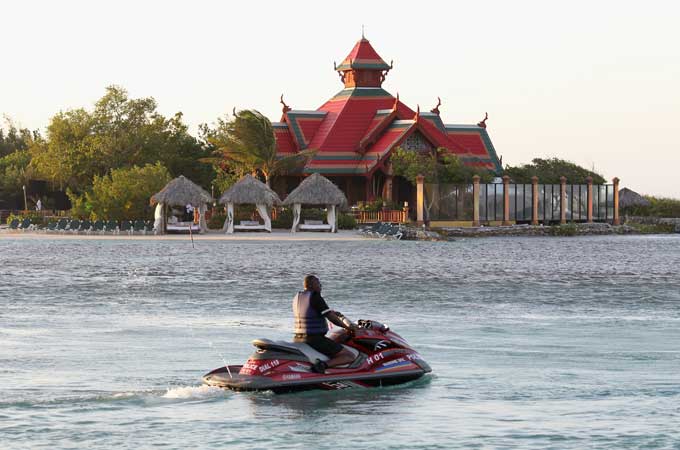 Warheads in Paradise: Jamaica is a popular tourist destination, but the island has long been used by smugglers [GALLO/GETTY]

Warhead: The term warhead refers to the explosive and/or toxic material that is delivered by a missile, rocket, or torpedo.

A story blipped by on the news radar yesterday that I sincerely doubt anyone noticed – oh, but you should. Not just because Jamaica has arguably the highest murder rate in the world, or that it is a drug and weapon smuggling haven… Things just got hotter even in Jamaica — police in Jamaica say authorities have seized 3,300 missile warheads and a machine to make missiles and bullets as well:

He declined to say where the shipment originated from or its destination. No one has been arrested.

Brown told reporters that police are seeking helping from international agencies after their findings.

He said it was the first time authorities had made such a discovery.

I wonder if it really is the first time they have made such a discovery. I wonder who in the government may be complicit in this. The authorities are claiming the heavy weaponry came from the US. I smell a DOJ rat here… another potential Fast and Furious sleight of hand maneuver. I just bet they are working with international authorities on this and Eric Holder is tied up in it, leading it somewhere.

I had to do quite a bit of digging on this one, but a few more details are beginning to surface:

Jamaican authorities have seized 3,300 warheads and a missile-making machine at the port of Kingston and sought help from international police in tracking the shipper, Jamaican media reported Friday.

The unauthorized arms shipment was discovered Thursday afternoon in a police and customs operation carried out at a berth of Kingston Wharves, the RJR News site reported.

A high-level investigation has been launched, and Jamaican police have asked for assistance from international law enforcement, the news service said.

It was unclear from any of the reports of the seized ordnance how large the warheads were, what type of launch device they were intended to arm or whether the shipment’s end destination was Jamaica or another country.

Jamaica has long been rife with gang violence and local drug wars, but arms intended for more wide-scale conflict haven’t previously been intercepted in the Caribbean country, Deputy Superintendent Steve Brown of the Jamaica Constabulary Force told the Gleaner newspaper.

“It’s the first we are seeing something like this,” Brown said.

Gun ranges in Jamaica have applied over the years for permits to make weapons and ammunition, but the government has always refused, Brown said, out of fear that the equipment could get into the wrong hands.

Authorities declined to disclose the origin of the shipment but identified a Jamaican from the town of Manchester whom they are seeking in the belief that he can assist in the probe, Brown said.

Notice the implied reasoning for the restriction on weapons and ammo. Yet, with all the government’s controlling measures, Jamaica is still one of the most violent places on earth. That’s because they’ve given criminals free reign while stripping the populace defenseless in many respects. It’s because the government and police are corrupt as well.

All of this makes me ponder what is coming in the future on this side of the planet. With now all but one or two countries in South and Central America either outright communist, socialist or ruled be a vicious dictator, and the Monroe Doctrine now being declared dead by Obama and Kerry, terrorism is going to ratchet up at a truly terrifying pace. I would say that some of that weaponry probably is meant to be used against Americans. Hear that? Those are the crickets of the Obama Administration and the wholly lacking protective measures to keep America safe. Tick, tick, tick people:

There was a chilling warning yesterday from senior law-enforcement personnel and a top security consultant that the seizure of bullet-making machines, along with over 3,000 warheads, at the ports on Thursday could be an indication that criminal elements are preparing for an onslaught.

Up to late yesterday, investigators probing the incident said they were following several leads, but confirmed that the two machines and 3,300 warheads seized were destined for the criminal underworld.

Investigators also confirmed that the barrels in which they were hidden were shipped from the United States and were consigned to Oneil Schrouder, a Mandeville man who has been listed as a person of interest.

Sources close to the investigation have revealed that the machines are used primarily to make and/or reload ammunition for the 9mm handgun, the firearm of choice among criminals and gun enthusiasts locally.

Noting that the confiscated items were “not something the average criminal can afford”, one high-ranking law-enforcement officer cautioned that it points to a sinister plot by those involved in organised crime.

“We are fighting a war … and this (the seizure) tells the public what is happening in our society,” said the law-enforcement officer, who spoke on condition of anonymity.

X-ray machines found the barrel with the cache. Ask yourself this… if this can get into Jamaica, what is stopping this type of thing or even a nuclear device from getting into any port in America? While bureaucrats and politicians are claiming a win against the illicit weapons trade, it feels like either more of a set up to me or graft. Any excuse will do when going after guns, especially when it’s the criminals in charge looking to disarm the public and empower the underworld. Missile warheads in Jamaica today, nukes in America tomorrow.

8 thoughts on “Missile Warheads in Jamaica”