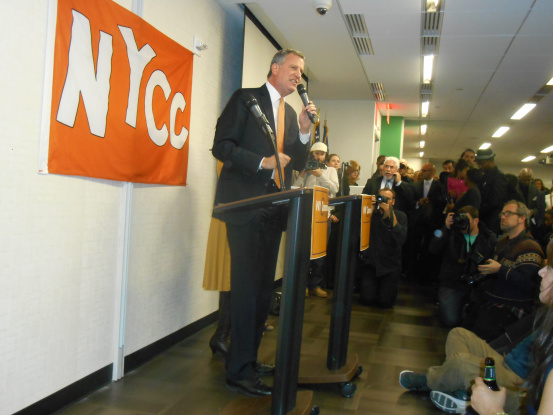 I absolutely agree with Jack Cashill… New York City will see a radical increase in crime over the next few years and you can lay it at the feet (clad in red sneakers) of their newly elected Marxist Mayor Bill de Blasio.

De Blasio seems to be taking to heart advice from comrade Van Jones. He has actively asked for advice from ex-cons on how to update and reform city police procedures. Chief among these suggestions is emasculating police tactics that were successful in radically reducing the crime rate. It is a safe bet that New York City will revert to the crime rates of the 1970s and it may get much worse than that. Progressive Marxism allows criminals to run rampant, while handcuffing the populace and preventing them from protecting themselves. It brings chaos, violence and corruption home to roost and that is exactly what de Blasio and his Marxist brethren want.

I’m not sure New York realizes what is about to happen to them, but they have roundly earned it. They are jubilant in their Progressive election results:

Last night Mayor-elect Bill de Blasio was again the darling of the left.

Headlining a Brooklyn fund-raiser for the group New York Communities for Change, Mr. de Blasio was hailed as a progressive hero and the fruit of a more than decade-long battle by labor groups, grassroots organizations and the Working Families Party to crown one of their own.

“I am so appreciative of not just the support I received and my campaign received, I’m appreciative of all the people who were given hope by New York Communities for Change, who were shown their own power,” said Mr. de Blasio, speaking at the Transport Workers Union Local 100′s headquarters in Brooklyn.

The fund-raiser drew hundreds of attendees, including many of the city’s political elite, allowing for the awkward collision of the Democratic powers-that-be and the strident, anti-establishment rhetoric of some of the event’s speech-makers. Chris Shelton, a vice president with the Communication Workers of America, urged the attendees noshing on brie cheese to join a “revolution” against the “bankers, billionaire and brokers of Wall Street.”

In particular, the fund-raiser honored the late Jon Kest, a founder NYCC who also helped launch the WFP, and served as a coming-out party for the city’s many liberal activists feeling emboldened by Mr. de Blasio’s ascension. Staunch de Blasio allies like George Gresham, the president of the powerful healthcare workers’ union, and Sex and the City actress Cynthia Nixon were honored, too, as well as Mr. de Blasio himself.

“We are in a progressive moment right now,” declared East Harlem Councilwoman Melissa Mark-Viverito, an early endorser of Mr. de Blasio and a leading candidate for council speaker. “This honoree [Mr. de Blasio] represents the culmination of Jon’s tireless, brilliant and visionary work to build our city’s progressive infrastructure and to build coalitions across groups that made our movement stronger … It was this infrastructure that was built that just about a month ago enabled our city to elect its first progressive Democratic mayor in 20 years, our Mayor-elect Bill de Blasio.”

Careful what you wish for in the Big Apple… de Blasio is a stone cold Marxist worm who will now control a city already rotten to the core. He will populate the political power structure there with others that will move the city even further left and deeper into misery.

The Mayor reserved much of his praise for the corrupt NYCC (New York Communities for Change), once called ACORN. That’s a hint of what is to come to New York. He has also been wining and dining influential businessmen and bankers, hoping to woo them into staying in New York. With ever higher taxes, leftishly insane policies such as charging delivery trucks $102 to cross into Manhattan and regulations that would choke a massive pachyderm, I wouldn’t count on it.

And as is the norm of Marxists, de Blasio speaks/lies out of both sides of his mouth. While he is wooing business, he headlined a fundraiser for the leftist New York Communities for Change, where Communication Workers of America spokesman Chris Shelton urged a “revolution” against “bankers, billionaire (sic) and brokers of Wall Street.” That is the true Progressive vision and intent of de Blasio and his cadre.

Race riots won’t be far behind all this either. Not only is the power structure of New York being fully stocked with Marxists, they are racists and anti-semites. There is literally plenty of hate to go around there:

There is a new City Council member from the neighborhood in Brooklyn called Crown Heights, which is ethnically the city’s most interesting—a mix of blacks mostly of Caribbean origin and ultra-Orthodox Jews mostly from the Lubavitch Hasidic sect. Her name is Laurie Cumbo, and this week she decided to take to Facebook to express some thoughts about the recent spate of violent “knockout game” attacks in which passers-by find themselves being struck hard in the face by someone’s fist for no reason. She reports that at a community meeting called to discuss the violence, she said this:

many African American/Caribbean residents expressed a genuine concern that as the Jewish community continues to grow, they would be pushed out by their Jewish landlords or by Jewish families looking to purchase homes. I relayed these sentiments at the forum not as an insult to the Jewish community, but rather to offer possible insight as to how young African American/Caribbean teens could conceivably commit a “hate crime” against a community that they know very little about.

Her insight into why a thug would punch a 19 year-old Hasidic kid in the face in the middle of her district while his friends watched, in other words, boils down to Jewish money. Cumbo knows she is treading on delicate ground here, so she attempts to mitigate the damage: “I respect and appreciate the Jewish community’s family values and unity that has led to strong political, economic and cultural gains.” And then she went all in: “While I personally regard this level of tenacity, I also recognize that for others, the accomplishments of the Jewish community triggers feelings of resentment, and a sense that Jewish success is not also their success.”

We are about to see racism and religious hatred spread in this country as never before. New Yorkers elected these people. They are sanctioning their actions, stances and views. It would seem many have learned nothing at all from history. Hate and jealousy are their comfort; violence and evil are their succor.

It was in the very neighborhood Cumbo now represents that the worst anti-Jewish event in modern American history took place: A three-day riot in 1991 following the accidental killing of an African-American child by a limousine driven by a Hasidic man. Two men were killed, stores were looted, and homes were targeted by Molotov-cocktail throwers through spotting the mezuzot on the doorfames. It was a shattering event for the city, not least because the mayor at the time, David Dinkins, seemed to feel as though he was powerless to act as the riot spread. His conduct during Crown Heights was so shameful it came to be one of the key reasons Rudy Giuliani ousted Dinkins from City Hall—even though the election took place two years later.

One thing New Yorkers knew in the wake of the Giuliani election was this: Acts of violence were going to be addressed, not excused; and anti-Semitic conduct would be greeted with roars of protest and outrage from City Hall. Eight years of Giuliani stilled and calmed the city; 9/11 created a new era of good common feeling; the perpetuation of Giuliani policies under Michael Bloomberg helped keep the urban peace. Now, only a month before the inauguration of DeBlasio, something ugly and evil is rearing its head. Who is there to speak out against Cumbo’s words?