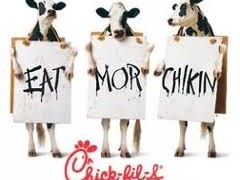 I asked him about the impact of the current economic policies of Obamacare, the $15 minimum wage proposal, and other tax and regulatory policies. Without hesitation, he said he’ll have three options if this tsunami hits; reduce his staff (in other words, fire employees), pass the costs to consumers, or shut down franchises – none of those are what I would call good options for a small business franchisee.

I’m not sure why people don’t understand businesses are in business to provide a product or service people actually want and make a profit (and a living for their families) — and don’t exist simply to provide jobs.

The government doesn’t need to provide a service people actually want (i.e. Obamacare) because they can just force you to buy it. Chick-fil-A on the other hand needs to provide customers with a tasty, economical meal all the while competing with every other fast food restaurant.

If the cost of doing business goes up, the restaurant owner has to adjust for it one way or the other. Your chicken sandwich might end up costing you six or eight dollars, instead of $2.99 – or your son or daughter (or you) might lose your job completely. Fewer employees mean slower service. When the minimum wage goes up, employers look for candidates with slightly more experience or maturity who are worth the extra money, and more entry-level jobs disappear for young people. For young blacks, with unemployment around 40 percent, it’s a recipe for disaster.

We all want this economy to turn around but let’s be realistic, it is not happening, no matter how much pixie dust twinkle bell spreads. We need to get back to sound economic policies, and a trustworthy president would also help.

If you’re old enough to recall, at this point in the President Reagan economy we were experiencing approximately 7.2 percent GDP growth. Under President Obama, we’re limping along barely at 2 percent. I know, the progressive socialists are going to point to the Dow Jones Industrial average record numbers as a measure of success. But I would dare them to stop printing money to the tune of $85 billion per month, and then see what happens to the market. And Obama’s pick to run the Federal Reserve is committed to continuing the horrifically misguided monetary policy. That alone is a major indicator that our economy isn’t strong enough to stand on its own.

So instead of staying in Washington DC and working on viable solutions, President Obama is off to campaign and spread more pixie dust – make sure ya’ll put on your masks and don’t inhale.

Do you believe the $15 minimum wage is good for the struggling economy? If you’re a small business owner, we want to hear from you. Go here.