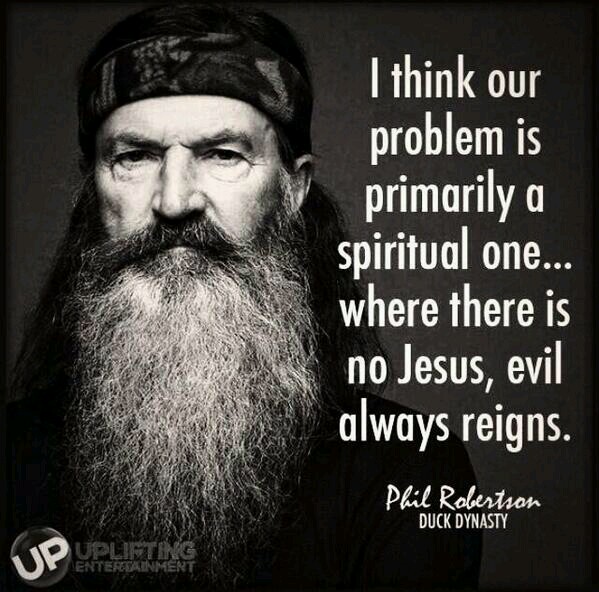 I did not start viewing Duck Dynasty until a few months ago. It has since become our favorite show and we can’t get enough of it. Christian values, real people, guns and hunting – what’s not to love? But it would seem that being a Christian and espousing your beliefs in America is now becoming ever more dangerous. As RedState pointed out, ultimately you will care and you will have to take a stand and take sides.

Phil Robertson, the patriarch of Duck Dynasty, just did a GQ interview where he stated his Christian beliefs, which included those concerning Gays. This whole blowup is not so much about the Gay issue, but far more about the Constitution and the First Amendment. In the interview, Phil was asked if he thought homosexuality was sinful:

“Start with homosexual behavior and just morph out from there. Bestiality, sleeping around with this woman and that woman and that woman and those men,” he told GQ, before paraphrasing the Bible in Corinthians. “Don’t be deceived. Neither the adulterers, the idolaters, the male prostitutes, the homosexual offenders, the greedy, the drunkards, the slanderers, the swindlers — they won’t inherit the kingdom of God. Don’t deceive yourself. It’s not right.”

For telling the truth and stating what he personally believed, A&E put him on indefinite hiatus. They fired him. I would be very surprised if the family did not tell A&E to stuff it. They managed to take THE most popular rated show ever and scuttle it. Phil had told A&E earlier that if they insisted he remove God or guns from his show, they were through:

On May 9, Greensboro, NC country station 93.1 The Wolf reported that after receiving complaints over prayers to God and the frequent use of guns on air, Duck Dynasty patriarch Phil Robertson said, “God and guns are part of our everyday lives [and] to remove either of them from the show is unacceptable.” 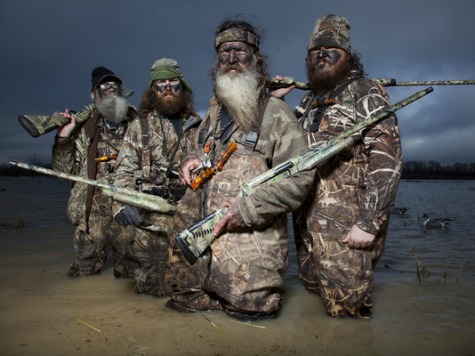 Sarah Palin came to Phil’s defense with the following quote:

Free speech is an endangered species. Those “intolerants” hatin’ and taking on the Duck Dynasty patriarch for voicing his personal opinion are taking on all of us.

She’s right and this will backfire on A&E and all the others out there that are anti-Christian. Phil Robertson just became a warrior for God and the Constitution and I am sure he is up to the task. An attack on one Christian, is an attack on all of us. Time to draw our line in the Marxist sand. 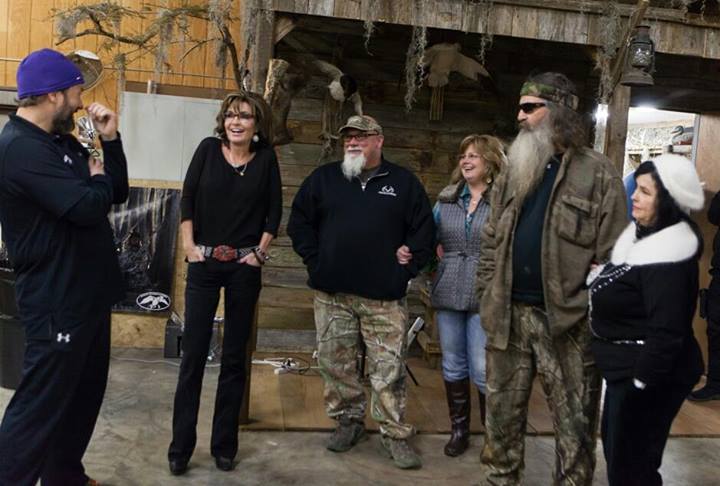 Drudge headlined this whole shameful turn of events on his site this morning with: “Roasted ‘Duck’ – Leader Fired After Gay Rant. The title is misleading as I don’t consider Phil’s statement as a rant, but a confirmation of his beliefs and faith. He has a right according to the First Amendment to state his views. And while A&E has a right to run their channel as they see fit, they obviously care more about the rights of Gays than they do of Christians and they fear the backlash from the LGBT community and their supporters. They don’t give a crap about Constitutional rights and evidently they are willing to throw away millions in revenue to placate a certain segment of society. That pretty much says it all, doesn’t it? A&E chose sides with GLAAD, took a stand and walked off a cliff. It’s okay for militant Gays to attack Christians and hunt them down, but when a Christian stands up and says what he believes… well, that’s hate don’t ya know.

A&E has placed Duck Dynasty patriarch Phil Robertson on indefinite hiatus following anti-gay remarks he made in a recent profile in GQ.

“We are extremely disappointed to have read Phil Robertson’s comments in GQ, which are based on his own personal beliefs and are not reflected in the series Duck Dynasty,” A&E said in a statement.

“His personal views in no way reflect those of A+E Networks, who have always been strong supporters and champions of the LGBT community. The network has placed Phil under hiatus from filming indefinitely.”

The news comes after Robertson compared homosexuality to bestiality in an interview with the magazine. He’ll likely appear in season four, which bows Jan. 15, since production is largely wrapped.

I’m not a boycotter, but in this case, I’m definitely willing to make an exception. I’ll do my shopping at the Duck Commander site, thank you very much. 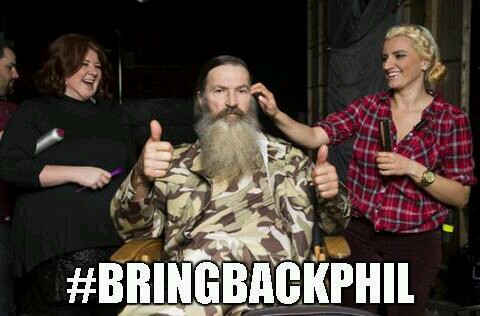 A&E and Phil Robertson both put their beliefs ahead of profits. One for God, the other for political correctness. Through tolerance, evil progresses. Many Christians are afraid to state what they believe because of a politically correct, 1984 environment imposed on America by our Marxist leaders.

Silence in the face of evil is itself evil: God will not hold us guiltless. Not to speak is to speak. Not to act is to act.

Christians should remember that quote, because you must take a stand, just as Phil Robertson and his family have done.

The dishonest and criminal faction of GLAAD is now on a Christian hunt for Duck Dynasty. GLAAD called Phil’s comments vile and stereotypically outdated – so Christianity is passe according to GLAAD? Color me not surprised. GLAAD has no idea what a true Christian believes. Red State has this to say:

The secular left believes otherwise. GLAAD spokesman Wilson Cruz, in a laughably ridiculous statement, responded to Robertson by saying, “Phil and his family claim to be Christian, but Phil’s lies about an entire community fly in the face of what true Christians believe.”

Actually, Robertson said precisely what true Christians believe and anyone, including A & E, letting GLAAD be an arbiter of true Christian thought is pretty quickly destined for hell fire.

A & E has now joined much of mass market culture in the Western World in picking sides in a fight — tolerance for gay rights, but not for Christians expressing honest answers to questions asked of their faith. The only surprise is that the Christians of Duck Dynasty could last there as long as they did. A&E has as much right to do this as you have to turn the channel. But they have clearly aligned themselves against us in the culture wars.

The world is at war with Christ and those who put their faith in Christ. The silver lining of this act is that many Christians who decided they could sit on the sidelines and not have to care will have a wake up call — particularly millennial Christians.

The Church, however, must show it will stand with those who stand with Christ and not shy away from this fight lest too many weak and new Christians go wobbly and silent.

You will be made to care. You will not be given the option of silence or sitting on the sidelines. 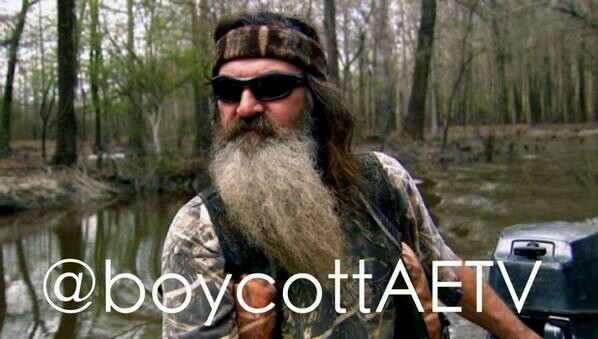 Rhymes With Right also made an astute observation that A&E just violated the 1964 Civil Rights Act by suspending Phil Robertson from Duck Dynasty:

It shall be an unlawful employment practice for an employer – to fail or refuse to hire or to discharge any individual, or otherwise to discriminate against any individual with respect to his compensation, terms, conditions, or privileges of employment, because of such individual’s race, color, religion, sex, or national origin;

I wouldn’t hold your breath that Obama and the DOJ will do anything on this though. They are quietly cheering on the sidelines as this happens. They are just about as anti-Christian as they come – you will find the Obama Administration in support of Islam, but not Christianity… period. 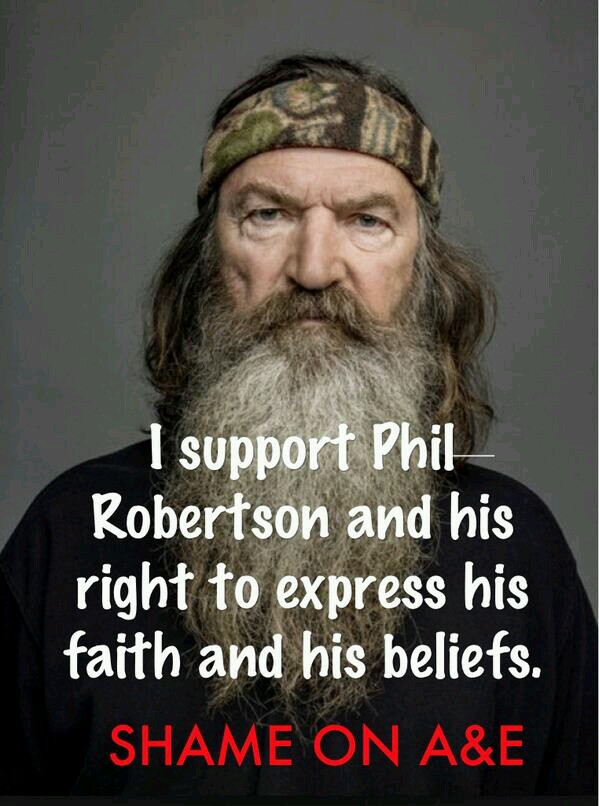 Phil Robertson has released his own retort:

“I myself am a product of the 60s; I centered my life around sex, drugs and rock and roll until I hit rock bottom and accepted Jesus as my Savior,” he said. “My mission today is to go forth and tell people about why I follow Christ and also what the Bible teaches, and part of that teaching is that women and men are meant to be together.

“However, I would never treat anyone with disrespect just because they are different from me. We are all created by the Almighty and like Him, I love all of humanity. We would all be better off if we loved God and loved each other.”

Let me tell you something… I have walked with God all my life. That doesn’t mean I didn’t stray – a lot. I have a colorful history to say the least. But I am a Christian now and forever and I share Phil’s views. There should be room out there for everyone to have their own views and lead their own lives. Whatever choices one makes is between them and God. It is not for our leaders and politicians to decide for us what is right and what is wrong. A&E made a horrific, knee jerk reaction which will cost them dearly. 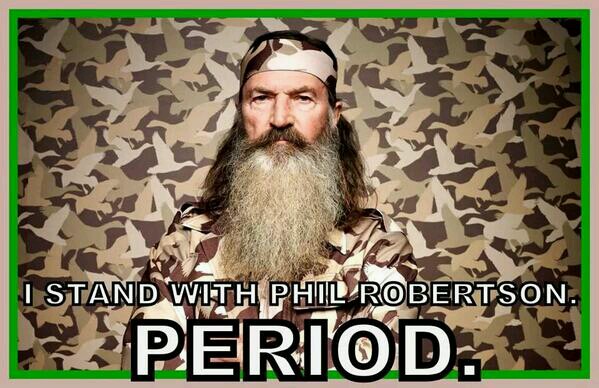 I believe that GQ is complicit in all this. I think they set Phil up and he knew it and did not care. He’s a man of faith and principle. Traits so foreign to the Left as to be alien in their strangeness to them. But if they were rocked by Duck Dynasty, they better hold on to their hats. Things are about to get interesting.

Glenn Beck, Sean Hannity, Mark Levin, Ann Coulter and possibly Rush Limbaugh, are teaming up. That’s right folks. They are talking, working together and appearing together. Despite the attempts of the Left and many on the Right to keep them apart, an alliance has formed and Progressives should be very, very concerned.

I also would have to believe that Glenn Beck would find a home for Duck Dynasty with TheBlaze. That would be funny and ironic. I certainly hope that happens. Glenn Beck believes in the Constitution and religious freedom as does the Duck Dynasty family. It’s a match made in, well you know… The silencing of the ducks has just turned into the resurgence of Christianity. 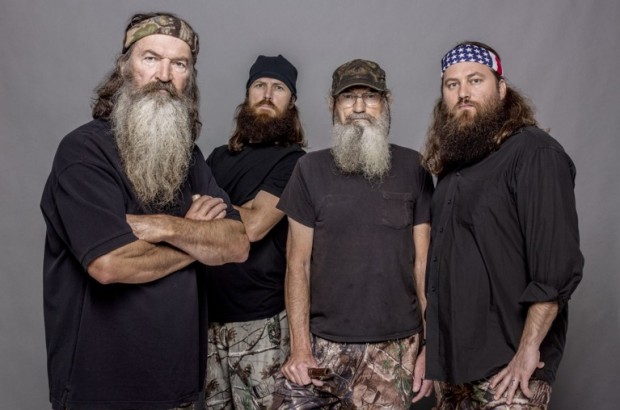 Verily, It Is A Clusterduck

The Right Planet – The Silencing of the Ducks

Allen West – Who defines our rights, and why I stand with Phil.

37 thoughts on “The Silencing of the Ducks”