By: JB Williams
Right Side News 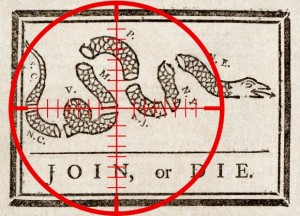 From freedom to fascism well describes the events of the last five years under the most anti-American regime to ever hold political power in the United States. One need not look too far to find evidence that the land of the free and home of the brave is now nothing more than a proletarian dictatorship operating in a completely lawless environment. Ironically, it is the “anti-imperialists” who now control the most “imperialist” administration in U.S. history.

They are not bound by decency or honor, the Constitution, the Bill of Rights, or even the laws they create for the rest of us. They don’t love freedom or liberty … they love stolen wealth and seized power. They are lawless criminals… Yet, they also control every federal agency, all of the federal assets, all of the high-tech high-powered weaponry, the mass media and every court. In short, they control us… How?

Your Silence is Your Consent

Therefore, the voice of opposition must be silenced. The political LEFT is highly organized and mobilized. They start derailing an election years in advance by cutting off financial and public support for the opposition, simply silencing the message.

Maker of famed anti-Obama documentary 2016, Dinesh D’Souza, has been indicted on alleged violations of federal campaign finance laws. What was his alleged criminal act? – According to the indictment, D’Souza donated $20,000 to congressional candidate Wendy Long’s campaign by aggregating the money from various people and falsely reporting the source of the funds. In other words, D’Souza stands accused of being a “campaign bundler” for a conservative candidate.

Now, take a moment to view the Obama “campaign bundlers” for 2012. According to the linked report which accumulates and reports I.R.S. campaign data, Obama had at least 428 “campaign bundlers” providing over $108,700,000 to the Obama re-election campaign. 42 Hollywood leftist bundlers raised over $12,100,000 for Barack Obama in 2012. Nobody knows where any of these funds originated as they all came in from a “bundler” with no list of individual donors.

In addition, reports were filed with the U.S. Secret Service evidencing massive overseas money laundering and credit card fraud in the Obama campaign. No investigation has been launched into any of the Obama violations of campaign finance laws, involving more than $200 million in campaign funding.

Yet, Obama’s federal agencies have indicted D’Souza for an alleged $20,000 in “bundled” funds for a congressional race?

During the same week, Obama’s I.R.S. is targeting Hollywood group the Friends of Abe in yet another two-year long battle to block 501 tax-deductible status for the group. How many left-wing 501 groups actively engage in political activities today, with tax-deductible and tax-exempt status?

Obama’s old campaign operation, Organizing for America was reconfigured as an “advocacy group” called Organizing for Action, securing 501 tax-exempt status almost instantly. For heaven’s sake, one of Obama’s bundlers has even been confirmed as an associate of Al Qaeda, and the FBI and DOJ is focused on D’Souza for a $20,000 donation to a congressional campaign?

Hollywood bundlers for Hillary 2016 line up in 2013… But the I.R.S. and DOJ are not at all interested in investigating these groups, despite what Obama agency officials proclaim a “zero tolerance policy” to enforce campaign finance laws, at least against their political opposition.

Well-known international left-wing financier George Soros funds a laundry list of tax-deductible and tax-exempt left-wing groups for the sole purpose of controlling election results. But there is no investigation into these activities either.

This is exactly what lawlessness looks like in a proletarian dictatorship. The full weight and power of the federal government is systematically used to silence any and all voices of dissent, where in the end, the silence is immediately reported as the “consent” of the people who have been silenced.

News that the NSA is snooping on every American has already affected the use of social and electronic media as a means of organizing against the blatant march to Marxism in our federal government.

A recent news report states that Facebook could lose as much as 80% of its users by 2017. As one who watched people rush to Facebook as a means of organizing Tea Party groups and activities five years ago, only to find out they were being spied on by the Obama administration later, I can tell you that the level of organizing efforts on Facebook have already dropped significantly.

People are afraid to post on social networking sites, or email their friends, or talk on the phone or Skype about what is going on in our country, as the Obama administration has turned all of the federal intelligence community towards snooping on American Citizens instead of real enemies abroad.

To end any real resistance to the federal assault on the Constitution and Bill of Rights, all Obama & Co. have to do is cut off the fuel supply to the resistance, the funding.

By denying tax-deductible and tax-exempt status to “right leaning” groups, they have greatly hampered the ability of the political right to raise the necessary funding for serious resistance operations. Meanwhile, they rubber stamp 501 status on every left-wing group that applies so that the flood gates for leftist funding from all over the globe are wide open.

The Consent of the Governed

In sum, the governed essentially “consent” to anything they won’t stand up and fight against.

Over 70% of Americans oppose ObamaCare, the federal debacle designed to fail with such magnitude as to force every American onto a single payer system. But what has that 70% done to stop it?

Over 90% of Americans now disapprove of congress, both parties. But what has that 90% done to remove every anti-American scumbag from congress in shackles?

Over 70% of “legal” Americans oppose any form of amnesty for illegal invaders who break more laws after breaking and entering into our country illegally. But what has that 70% done to stop Washington DC from ramming amnesty for illegals down our throats?

Those who don’t vote at all, consent to whatever follows, by their mere silence at election time.

Those who attempt to “vote their conscience” by casting a ballot for candidates barely in the race, have also consented to whatever happens next, as the worst evil takes the reigns following an ill-advised effort to block a “lesser evil.”

By the time the “opposition” figures out they are in a battle for the future of freedom and liberty, they will no longer have the freedom, liberty or resources to resist.

Our enemy never sleeps… They never waver in their goals… They never concede ground and they never willingly give back what they take, be it property or power.

The only rights we have as Americans are the rights we are willing to fight for and defend.

Come what may, it will come with the consent of the people…

All that is needed for evil to prevail is for good men to do nothing, and Americans have perfected the art of doing nothing in the face of evil. Passive silence equals active support in any dictatorship.

Fear once caused fury in the heart of every American Citizen, but today, it mostly causes paralysis…

That’s why the Obama and Clinton regime is all about instilling fear. I.R.S – NSA – CIA – FBI – ATF – DHS – DOJ – EPA – DOD… these were all once tools of national security. Today, they are tools of mass intimidation, not against our nation’s foreign enemies, but against the American people who would dare speak out in opposition.

Our silence is our consent… and that is why there must be silence!

The top priority mission of our federal agencies today is to silence the voice of dissent in America.

Your silence is not only your consent … it is the source of your demise as well. Are you scared yet?

JB Williams is a business man, a husband, a father, and a writer. A no nonsense commentator on American politics, American history, and American philosophy. He is published nationwide and in many countries around the world. He is also a Founder of The United States Patriots Union and a staunch conservative actively engaged in returning the power to the right people in America.