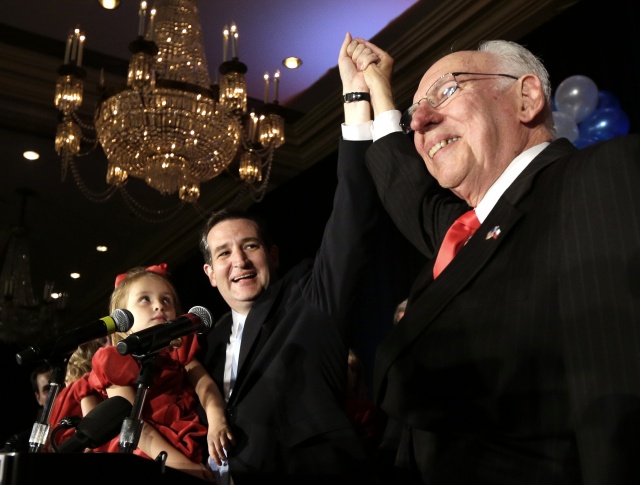 Talk about stone cold, wetting their pants fear… all you have to do is read HuffPo to see Progressives shrilly denouncing Ted and Rafael Cruz. It’s reminiscent of a vampire shrinking from the cross.

Starting out with what the Marxists consider to be a slam, they inadvertently win over the majority of America by incredulously showcasing the standing ovations that Rafael Cruz gets when he compares Obama to Fidel Castro. Arguably, one of the finest speakers of our time, Rafael pulls no punches and tells the truth. Something that is anathema to the Leftists. He should know a dictator when he sees one, Rafael Cruz is from Cuba.

The truth hurts you miscreants:

“He acts no different than that bearded guy I left behind in Cuba,” the father of firebrand U.S. Sen. Ted Cruz told a packed tea party gathering.

The article also notes that Cruz is a pastor, as if that is somehow disparaging. Then they have the unmitigated gall to compare him to that collectivist snake, the Reverend Jeremiah Wright. Laying out how Ted Cruz will have to distance himself form his firebrand father as Obama distanced himself from Wright. Not. Going. To. Happen. Comparing Cruz to Wright is like comparing light to dark and proclaiming they are the same. No one is listening to this claptrap anymore and just about everyone in America sees these lies for what they are – Marxist propaganda and smears.

Next up on the piece’s sly insinuations and contemptuous belittlement comes the poke at Rafael’s age – he’s 74. Well, most of the Progressives are that age and none are as sharp as Cruz – not even close. Pelosi has had one too many face lifts as has Kerry – both are shy a brick or two of a load. Then there’s Biden who doesn’t even have a load. Reid is senile as is McCain. And the list goes on. Then they attack his lack of hair, his ‘spectacles’ and his false teeth. What are they, five? You boys and girls might want to take a good, long old look in the mirror… Cruz is a handsome and strong presence for any age. Compared to the majority of Congress, he’s a fashion model.

As for Cruz in the past calling for sending Obama “back to Kenya” and accusing him of being an “outright Marxist” out to “destroy all concept of God,” I fail to see anything wrong with it. It’s not racist to tell one to go back to where they spent part of their childhood. It’s not slanderous to call a Marxist a Marxist. And could it be any more obvious that Obama hates all things Godly?

Look at this quote as they swipe at Cruz through his father:

His son, the conservative grassroots darling and often-mentioned 2016 presidential prospect, also relishes controversy — thrusting himself into the teeth of last year’s government shutdown battle. But public officials, even combative ones, are usually wary of loose-cannon family members as too politically dangerous.

Ted Cruz loves his father. He considers him a Godly man, not a loose cannon. Cruz is a Tea Party darling and stands an excellent chance of being president – why? Because he dares to stand against government tyranny and because he comes from a family that knows oppression firsthand. Something Americans are just now having a close encounter with. Progressives are shocked that Cruz would let his father speak for him, campaign for him. More to the point, Rafael scares them to death with his eloquence and plain spoken truth. Warriors come in all ages and types and by the way the Left is reacting to the Cruz duo, you know that they are a threat to them.

What a bunch of arrogant fools. Dissing anyone who believes in God and is against Marxism. They go on in the article alluding to monies spent on Rafael traveling and speaking for Ted Cruz as somehow shifty. Wow! That takes a set, considering all the money they have stolen from us and still are. Talk about the pot calling the kettle black. By the way, Ted Cruz is not his father and his father is not him. Each is entitled to their own opinions and their own actions. If you people feel the need to blame the son for trumped up accusations against the father, then you really shouldn’t have chosen Obama, should you?

No truer words could be spoken than what Rafael Cruz has to say:

“I have a burden for this country and I feel that we cannot sit silent,” he said in an interview as he shook nearly every hand in a crowd of 300-plus following his speech in Madisonville, a tiny town known as Texas’ mushroom capital because of a popular local festival.

The story of Rafael Cruz and what he believes is stirring and passionate:

Rafael Cruz fled Cuba in 1957 after being jailed under dictator Fulgencio Batista. He arrived in America with $100 sewed in his underwear and worked his way through the University of Texas as a dishwasher. He says he thought of Castro as Cuba’s savior until the state started seizing private property.

It’s a story Ted Cruz supporters know by heart — both men repeat it at nearly all public appearances.

“He’s the real thing. He’s not just a front. He believes what he says,” said Henry Churchwell, a retiree who heads the Madison County Tea Party.

In the United States, Rafael Cruz said, he became concerned in the 1970s that “the government was starting to impose socialism,” and was delighted when his son went to Princeton and Harvard and earned a law degree, saying the schools needed stronger conservative voices.

The elder Cruz told the Madisonville crowd that the death panels that “everybody maligned” when former Alaska Gov. Sarah Palin spoke out about them have now begun under the White House’s signature health care law. If Republicans don’t “retake the Senate in 2014, I don’t know if we have a country in 2016,” he said.

When he meets with preachers, Rafael encourages them to endorse conservative candidates from the pulpit — in defiance of federal bans on nonprofits engaging in political campaigning.

“I lost my freedom once,” he said of leaving Cuba for good “and I’m not going to lose it again. I’d rather die trying.”

Try as they might, the Marxist Progressives will not be able to destroy the Cruz family. Father and son are striking terror into Progressive hearts and I am thrilled over it. Giddy up… 2014 and 2016 are going to be incredible battles. Time to clean House and Senate. Time to elect a true conservative Constitutionalist as president. The Progressives will be thunderstruck by the Tea Party. Good times.

And coming soon… The Cruz Coalition’s web site will go live. Envisioned by Trevor Loudon, we have teamed up to bring you a slate for a dream team to reinstate the vision and principles of our Founding Fathers. Join the fight – join the Cruz Coalition.