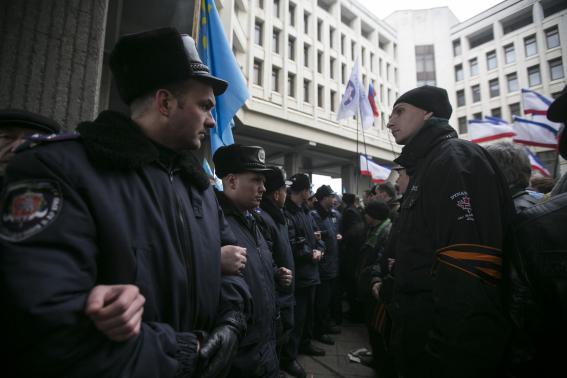 In a move that I predicted would happen, Mother Russia is now seeking to expand her borders and influence by force. Lebensraum is a German term calling for territorial expansionism – breathing room for tyrants. Although the Russian version of this does not include race superiority, it does involve national superiority.

Putin is playing hardball and ramping up his police state and military reach out in the open. As soon as the Olympics ended, he proceeded to round up over 200 protestors in Moscow. These included members of Pussy Riot and the well-known opposition leader, Alexei Navalny. The irony of it all is that these protestors were protesting the imprisonment of protestors. Wrap your head around that one. Many were beaten with horsewhips and batons by Cossacks. There is no such thing as a ‘gentle’ police force in Russia. Human rights mean nothing – it is all for the bear collective.

Russia is reportedly sheltering Viktor F. Yanukovych, the ousted president of the Ukraine as he hides behind Russia’s skirts and says he fears for his life, while claiming he is the rightful ruler of the Ukraine. No surprise there. Mother Russia is set to put Yanukovych’s house in order in the Ukraine with bloody force and suppression. It’s the Communist way.

It has begun as Russia scrambled its fighter jets yesterday and amassed approximately 150,000 soldiers on the border of the Ukraine in preparation for a massive take-down. Pro-Russian gunmen stormed the offices of Crimea in the Ukraine and took it over as well. The Russian military is on combat alert and they have tightened security at the headquarters of Russia’s Black Sea Fleet on the Crimean peninsula in southeastern Ukraine. This of course prompted our milquetoast Secretary of State, John Kerry, to cry foul and warn the Russians that any military intervention in the Ukraine would be a “grave mistake.” I’m sure they are taking Lurch very seriously – not. It’s all for show. In the end, I’ll bet that Obama is secretly cheering Putin on.

The siege on Crimea is a military takeover by Russia. Here come the Russians:

Witnesses said the gunmen in Simferopol, the Crimean regional capital, wore unmarked camouflage uniforms and carried rocket-propelled grenades, sniper rifles and other weapons. They raised the Russian flag over the local parliament building.

The men did not immediately voice any demands and threw a flash grenade in response to a journalist’s questions. They wore black and orange ribbons, a Russian symbol of the victory in World War II, and put up a sign reading “Crimea is Russia.”

Maxim, a pro-Russian activist who refused to give his last name, said he and other activists had camped overnight outside the local parliament in Simferopol when 50-60 heavily armed men wearing flak jackets and carrying rocket-propelled grenade launchers and sniper rifles took over the building.

“Our activists were sitting there all night calmly, building the barricades,” he said. “At 5 o’clock unknown men turned up and went to the building. They got into the courtyard and put everyone on the ground.

“They were asking who we were. When we said we stand for the Russian language and Russia, they said: ‘Don’t be afraid. We’re with you.’ Then they began to storm the building bringing down the doors,” he said. “They didn’t look like volunteers or amateurs; they were professionals. This was clearly a well-organized operation.”

A convoy of seven armored personnel carriers was seen on a road near the village of Ukromnoye, about 10 kilometers (some 6 miles) away from the city of Simferopol. In Moscow, Russia’s Foreign Ministry said that Russia was abiding by an agreement with Ukraine that sharply restricts troops movements, but acknowledged some unspecified troops movements, claiming they didn’t violate the deal, the Interfax news agency reported.

In a statement, the local government said Crimean Prime Minister Anatoly Mogilyev had tried to negotiate with the gunmen but was told “they were not authorized to negotiate and present demands.”

Ukraine’s acting interior minister, Arsen Avakov, said on his Facebook page that police were sealing off the area.

“Measures have been taken to counter extremist actions and not allow the situation to escalate into an armed confrontation in the center of the city,” he said.

Phone calls to the Crimean legislature rang unanswered, and its website was down.

While NATO and the US warn Putin not to militarily go in, it is all but assured he will and is doing so right now. Putin is looking to expand his reach. Georgia is on the menu and he will look to expand into Europe. Russia controls most of the major gas lines and a great deal of the oil. They are the lifeblood of Europe and he will use them to strangle his opposition into submission. Putin is ignoring all criticism and warnings. The Russian bear has strengthened their military, while the US, being the sole super power left, has aggressively weakened hers. He does not fear us or NATO. He also has very powerful allies in China and Iran. Do the math.

For those who naively believe this is far away and has nothing to do with us, you should reconsider that stance. Russia has a warship docked in Havana. The Viktor Leonov CCB-175 boat, measuring 91.5 meters (300 feet) long and 14.5 meters wide, was docked at the port of Havana’s cruise ship area, near the Russian Orthodox Cathedral. They are not there to exchange recipes and swap war stories with the Cubans. Neither Russia or Cuba will say what the ship is doing there, but I have an idea why. Oh yes, I do.

That ship carries a crew of 200. It has 30mm guns and anti-aircraft missiles. It has been reported that Cuba has killing units on the ground in Venezuela to help the beleaguered dictator there. What do you want to bet the Russians are here to help their comrades in Communist arms? Without the Monroe Doctrine in place and with a President who is an enemy within America, what’s to stop the Ruskies from quelling the uprising in Venezuela? All you need is a little violent help from your friends.

And another warm and fuzzy thought… Iran has a major base in Caracas. What’s to stop them from coming to the aid of the despot in Venezuela? They also have ships on the way. Russia or Iran could also give nukes to Venezuela. You can bet they would have the US as a target in mind. So you see… it is a small world after all, militarily speaking.

Putin has adopted his own version of the Lebensraum Policy. He is expanding the Russian living space, power, control and influence. We’re back in the USSR, baby.