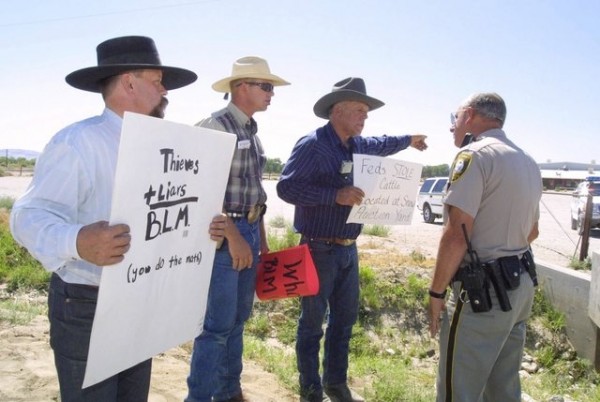 “We’re not pointing guns at anyone but we’re sure getting a lot of guns pointed at us.”

I’m from Nevada and trust me when I say there is a long and deep hatred of the BLM there. Cliven Bundy, the last rancher in Clark County, Nev., and his family have run a ranch there for well over a 100 years. Their cattle have fed off open range grazing freely, until 1993, when the US government decided they wanted to extort Bundy by charging him fees to let his cattle feed on a ranch that he oversees. Now, the Bureau of Land Management (BLM) has moved in with officials armed with machine guns, who are surrounding the ranch and forcibly removing the owner’s cattle, according to the rancher’s family. This is with the help of hired cowhands. Shame on them. Bundy won’t go down without a fight – you see, he’s fighting for his family and his Constitutional rights and he’s willing to go down for it. He’s not alone by any means… this whole situation could turn into another Ruby Ridge or Waco — the Feds are making their fascist point: we own all of the land and you can pay up or have it seized.

After 20 years of court battles, the BLM finally got a corrupt judge to issue a federal court order to have Bundy’s “trespass cattle” forcibly removed with heavy equipment, sporting artillery, the family said. Heavy handed doesn’t begin to cover it here.

Bundy said the government has brought everything but tanks and rocket launchers.

I’m sick of this. I’m sick of the Feds breaking down our doors with SWAT teams in the dead of night. I’m sick of warrantless search and seizures. I’m sick of them seizing our property and forcing us to prove innocence to get it back. I’m sick to death of the spying and bullying. And I think the rest of America feels the same way. These jack booted thugs are taking away this family’s livelihood that they have owned and worked for since 1870… now they’ve arrested his son. Bring on the Range War you asshats. I wish I was back in Nevada, I’d be standing with the “Red Dawn” supporters out there. The Feds are saying the protestors violated a “First Amendment Area” that was cordoned off by these brown shirts. WTF? What the bloody hell does that mean? Hundreds told the goons they could stuff it and protested any way.

This is the fricking EPA Marxists at work over the endangered desert tortoise. More Agenda 21 forced upon the people – more government regulation and control. These radical environmentalist thugs are cheering all this. You are evil and we’ve had enough.

Environmentalists are praising the government’s forceful actions, which are being taken to protect the “desert tortoise.”

“We’re heartened and thankful that the agencies are finally living up to their stewardship duty,” said Rob Mrowka, a Nevada-based senior scientist with the Center for Biological Diversity. “The Gold Butte area has been officially designated as critical habitat for threatened tortoises—meaning the area is essential to their long-term survival as a species.”

The BLM designated 186,909 acres of the Gold Butte off-limits for the “critical desert tortoise” population in 1998. Bundy had already lost his grazing permit five years earlier for refusing to pay fees for the land, which his family has ranched since the 1870s.

The “federal grazing fee” is $1.35 per “Animal Unit Month,” or the amount of forage needed per animal, each month. Bundy said he owes roughly $300,000 in back fees, while the BLM asserts he owes over $1 million. The BLM defended the removal because Bundy did not “voluntarily” give up his cattle.

So, the government just decided they own the land and that is the way it is, huh? Screw the government. And I mean that. I am beyond angry over this and am struggling not to get profane here.

From the DC Clothesline:

“We’ve had enough, we’re going to take our land back, we’re done,” said Bundy’s wife, Carol Bundy, adding that the rally was held “to show that we are not standing alone. People are getting tired of the federal government having unlimited power.”

More than 100 supporters violated a crudely taped off “First Amendment Area” to rally in support of the Bundy family, erecting two flagpoles with the words “We the People” attached, above a flag which read, “Liberty Freedom For God We Stand”. The first amendment area stood empty, with one sign nearby declaring, “1st Amendment is not an area.”

“I grew up on this ranch. This is what we knew,” said Margaret Houston, Cliven Bundy’s younger sister. “It’s got nothing to do with the cattle and the tortoises. It’s about taking our rights — power — and it’s wrong.”

“Right now it looks like the movie Red Dawn,” said, Ryan Bundy. “Right now we’ve got 200 plus federal agents up there in a military compound that they have put together and they’ve got snipers….everybody’s armed, and they’ve been monitoring our ranch with high-tech surveillance equipment….it was never about the grazing fees, it’s about control.”

Ranch manager Derrel Spencer warned that a “revolution” was brewing unless a solution could be found to settle the dispute.

As we reported yesterday in an article that has already garnered over 4300 comments, Bundy’s son Dave Bundy was arrested on Sunday by BLM officials after refusing to follow a dispersal order as he filmed cattle from a state highway. According to Dave’s brother Ryan Bundy, snipers had guns trained on them throughout the incident. Feds claimed Dave Bundy had violated the ludicrous “First Amendment Area,” outside of which free speech is banned.

Trained snipers have their sites on these people, just itching for a bloodbath:

I would ask these Feds how they sleep at night? How do you justify this and live with yourselves? Have you really pledged all to the government and have forgotten what it is to be a free American? Obviously, you’ve made your choice. Well, mine is made too and I stand with the Bundys. After his son’s arrest, Cliven Bundy posted a statement on his website which read, “They have my cattle and now they have one of my boys. Range War begins tomorrow.” Damned straight Cliven – they stepped way over the line. They arrested his son and threw him physically on the ground for taking pictures. The BLM said they took Dave Bundy into custody following his “failure to comply with multiple requests by BLM law enforcement to leave the temporary closure area on public lands.”

This is what arming the Fed to the teeth brings and don’t kid yourselves, the Bundys are not an isolated case. They are coming after many of us and this is just one line in the sand. This is Obama’s new homeland military force in action:

His wife, Carol Bundy, said that roughly 200 armed agents from the BLM and FBI are stationed around their land, located about 75 miles outside of Las Vegas. Helicopters circle the premises, and the airspace and nearby roads remain blocked.

“We’re surrounded,” Carol Bundy said. “We’re estimating that there are over 200 armed BLM, FBI. We’ve got surveillance cameras at our house, they’re probably listening to me talk to you right now.”

Video has been taken of helicopters and cowboys removing the cattle, but true to their evil nature, the Feds are lying about it. What did you expect? They are claiming their security is in place because ‘they’ have been threatened. That’s rich and so typically Progressive. As of Monday, officials had seized 234 of Bundy’s 908 cattle. Impounding the cattle alone could cost the government as much as $3 million, but to the Bundys, it is priceless in its devastation.

The sheriff and governor there are being cowards. They say there is nothing they can do. No… they don’t want to get into a pissing contest with the government. Weakness is being bleated from politicians who could damn well put a stop to this:

“I’m a producer,” Cliven Bundy said. “I produce edible commodity from the desert forage, and all of these things are governed under state law. So, in other words, this type of government has eliminated all of our state law, eliminated our state sovereignty, and has took control over our public lands and even took control over our Clark County sheriff. They’ve taken the whole county over. The whole state, almost.”

“This is just about power of the government,” Carol Bundy said.

Nevada Gov. Brian Sandoval (R.) voiced his concern about so-called “First Amendment Areas,” designated locations set up by the BLM where citizens can protest the removal.

“Most disturbing to me is the BLM’s establishment of a ‘First Amendment Area’ that tramples upon Nevadans’ fundamental rights under the U.S. Constitution,” he said in a statement Tuesday.

“To that end, I have advised the BLM that such conduct is offensive to me and countless others and that the ‘First Amendment Area’ should be dismantled immediately,” he said. “No cow justifies the atmosphere of intimidation which currently exists nor the limitation of constitutional rights that are sacred to all Nevadans. The BLM needs to reconsider its approach to this matter and act accordingly.”

Sandoval also said his office has received numerous complaints about the BLM’s conduct, including road closures and “other disturbances.”

Nice speech Governor, how about putting something behind your words? Offensive? That’s an understatement if I’ve ever heard one and you know it. Grow a set and kick the Feds out, it’s your state damn it. The Bundys will do whatever they have to. They’ll protect their family and land, no matter the cost. What’s your cost? What are you doing? A tough-as-nails rancher will be the last man standing as federal fascism cowboys up in Nevada. I feel a revolutionary rallying call coming on.