By: as Dawn sees it
Gulag Bound

In order to understand the rational behind what has taken place at the Bundy Ranch in Clark County, Nevada, it is vital to understand some of the mindset behind it. The United Nations now has a great deal of control over what happens in United States’ land, largely but not only federal ownership and/or control. What we are seeing is an international body now governing over many parts of the U.S. 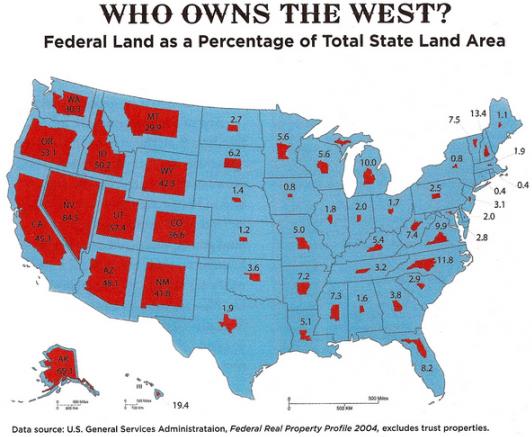 It then becomes a question of whether international treaties and other agreements, especially UN Agenda 21 in this case, trump the United States Constitution. Do the people enforcing these “laws” recognize or even know the codes they are enforcing? Is there a reason the constitution is no longer truly taught? These are just two of the questions in a very complex set of issues, which have combined to become a slow, methodical subversion of the primary documents that once seemed to govern our country. There are many layers to this and when digging into them, a clearer picture emerges.

By the recently deceased researcher, author, and expert on UN Agenda 21, Henry Lamb, an article was written in 2003 dealing with the very issue people are taking note of today. It is entitled “Why the Government is Grabbing our Land” (excerpt):

By 1976, the United Nations was ready to articulate a general policy on land use. This policy is stated in the final report of the first U.N. Conference on Human Settlements (HABITAT I), held in Vancouver, British Columbia in 1976.

The preamble to the section on Land, says:

“Land…cannot be treated as an ordinary asset, controlled by individuals and subject to the pressures and inefficiencies of the market. Private land ownership is also a principal instrument of accumulation and concentration of wealth and therefore contributes to social injustice; if unchecked, it may become a major obstacle in the planning and implementation of development schemes. The provision of decent dwellings and healthy conditions for the people can only be achieved if land is used in the interests of society as a whole. Public control of land use is therefore indispensable….”

The land use philosophy of the non-American world was fully incorporated into international law and norms, with the support of the United States government.

For a detailed explanation on the Wildlands Project here is a short video, again from Henry Lamb. This project is justified by proclaiming it is all about protecting and restoring core wilderness areas. In reality this is a land grab designed to move people off the land and place them into “sustainable communities,” in less than twenty-five percent of our own American land.

In 1994 the map below was presented by Michael Coffman to the U.S. Senate, which stopped the ratification of the biodiversity treaty. Despite such efforts we find that it is being implemented through various government agencies, executive orders, trade associations, etc. Generally, it is funded by our tax dollars, or central bank cartel funds, or those of foundations formed by corporations and tycoons which in our history have become borrowers of the worlds’ major banking institutions. 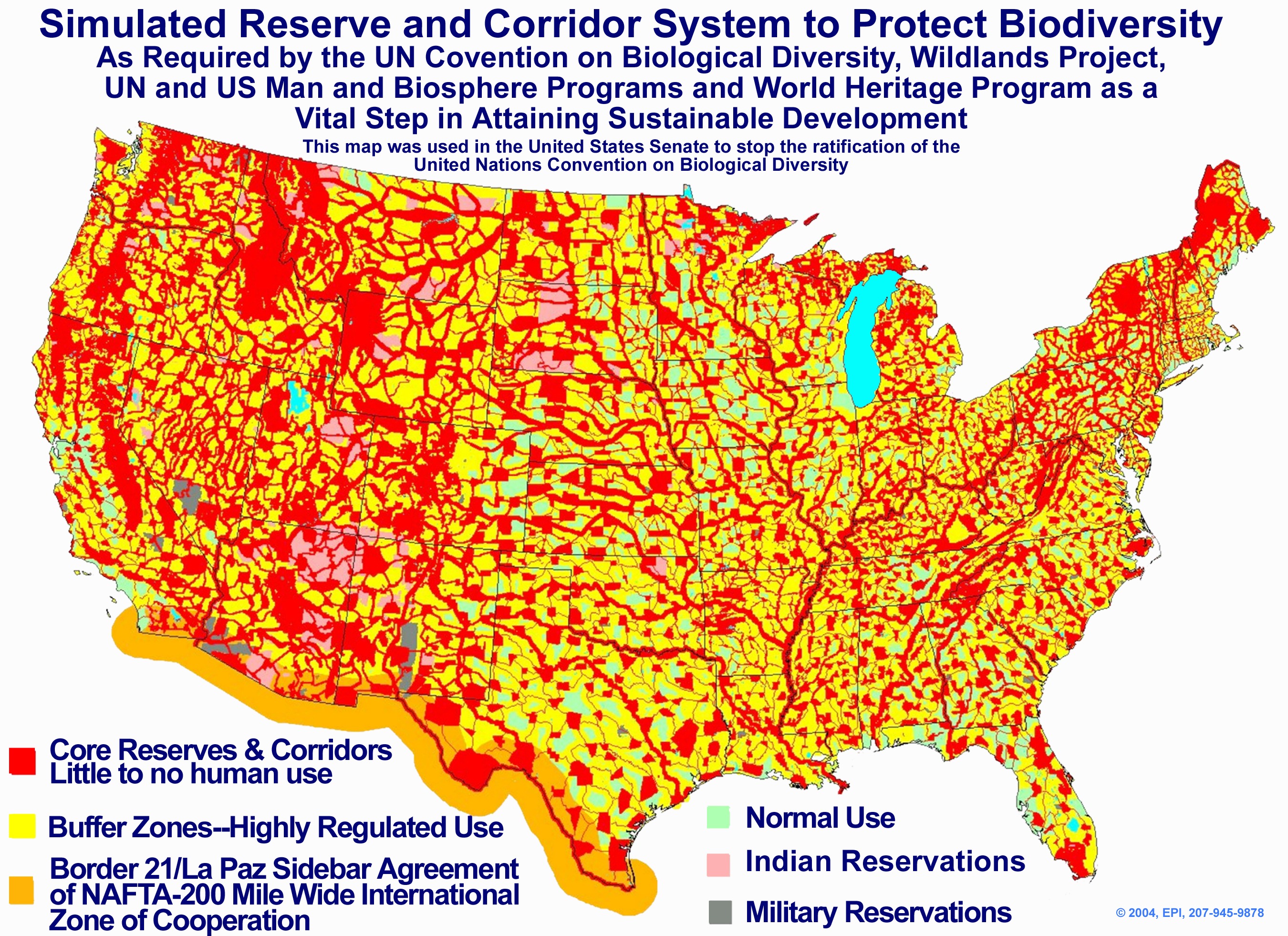 A program for National Heritage sites is just one example of how this plan has still continued. Its efforts to control land have increased at an alarming speed. As more people wake up to the reality of what is taking place, we are naturally going to push back, as seen at the Bundy Ranch. Then again, the efforts to implement this agenda will only become bolder. That will create a very tense situation to say the least.

From another stalwart activist for sovereign Americans’ foundationally agreed natural rights of life, liberty, and property, Tom DeWeese, in a 2012 article:

I mentioned H.R. 4099, a bill now before Congress to “Authorize a National Heritage Area Program, and for other purposes…” The bill describes the need for Heritage Areas this way: “Certain areas of the United States tell nationally significant stories; they illustrate significant aspects of our heritage; possess exceptional natural, cultural, scenic, and historic resources; and represent the diversity of our national character.”

So, name a section of our nation that doesn’t contain “significant stories.” Or locate a place where people from the past didn’t walk, live or carry out their lives. That definition is simply too broad to be practical – if the real purpose is to honor our heritage.

But the bill goes on to explain: “In these areas, the interaction of natural processes, geography, history, cultural traditions, and economic and social forces form distinctive landscapes that should be recognized, conserved, enhanced, and interpreted to improve the quality of life in the regions and to provide opportunities for public appreciation, education, enjoyment, and economic sustainability.”

Where have we heard these very words before – economic and social forces; conserve; improve the quality of life?

Well, let’s try this quote from the President’s Council on Sustainable Development which said, “Sustainable Communities encourage people to work together to create healthy communities where natural resources are preserved, jobs are available, sprawl is contained, neighborhoods are secure, education is lifelong, transportation and health care are accessible, and all citizens have opportunities to improve the quality of their lives.”

The President’s Council on Sustainable Development, by the way, was organized by Bill Clinton in the 1990’s to create policy to reduce or eliminate “unsustainable” activities by controlling such things as consumerism, high meat intake, use of fossil fuels, roadways, automobiles, dams, pastures, golf courses, and much more.

In keeping with the theme of earth’s resources being confiscated for the sake of its most wealthy and powerful elitists, and informed by the Biodiversity map, let us look at what the “Wilderness Act” prohibits. A common and unsettling theme here is its disdain for humans and the impact they have on the environment.

Section 4(c) of the Wilderness Act prohibits the use of motor vehicles, motorized equipment, motorboats, landing of aircraft, and all other forms of mechanical transport. Section 4(c) of the Wilderness Act provides two narrow exceptions that allow motorized or mechanized uses in wilderness for administrative purposes: 1) in emergencies involving the health and safety of persons within the area; and 2) when a motorized or mechanized action is necessary as the minimum requirement for proper protection and administration of the area as wilderness.

The Act further defines wilderness “as an area to be “protected and managed so as to preserve its natural conditions and which (1) generally appears to have been affected primarily by the forces of nature, with the imprint of man’s work substantially unnoticeable…” The Act envisioned the Wilderness system to be governed by natural processes, retaining its “primeval character and influence…” The hands-off approach directed by the Act provides that management decisions and activities must strive to minimize the level of human interference in the Wilderness ecosystem.

Despite the statutory intent that Wilderness be self-willed or self-shaping landscape, a variety of intentional human manipulations do take place in Wilderness, many of them unrelated to protecting Wilderness character. Examples of common manipulations include fish stocking, fire management, wildlife transplants, endangered species management, management of game populations, predator control, and invasive weeds and insect infestations.

The National Wilderness Preservation System is made up of four federal agencies.

In 1993 the Carhart Center was created, interestingly enough the same year Clinton signed an Executive Order titled “The President’s Council on Sustainable Development“. The center’s mission is as follows:

The mission of the Carhart Center is “to foster interagency excellence in wilderness stewardship by cultivating knowledgeable, skilled and capable wilderness managers and by improving public understanding of wilderness philosophy, values and processes.” The Carhart Center’s vision is to be a “national and international leader in the development and implementation of wilderness information, training and education programs.

In order for something to be implemented by future generations it has to be taught, which is another mission of the Carhart Center.

Hand-in-hand with the Carhart Center’s mission of training wilderness managers is the goal of improving public understanding of wilderness philosophy, values, and processes. This has been approached through development of classroom curricula and other outreach products. The Carhart Center has developed and distributed two different, comprehensive Wilderness and Land Ethic curricula— one targeting kindergarten through eighth grade students, and one designed for ninth through twelfth grade students. The curricula integrate wilderness concepts and values into an array of subject-matter topics, making it attractive and convenient for teachers to include wilderness in their lesson plans. The Carhart Center also offers courses that provide wilderness managers with the skills needed to present teachers’ workshops locally to facilitate use of the curricula.

For the final phase, enforcing all that one has been taught. A future career in “Wilderness Management“:

NRSM 405 and NRSM 561 study ecosystem characteristics and basic principles of wilderness management. Separate chapters discuss management of specific wilderness resources such as fire, wildlife, cultural and historical sites, etc.; managing non-conforming uses such as grazing, mining, and motorized vehicles and equipment and mechanical transport. Discusses the use of primitive means to achieve management objectives, use of the minimum tool, and no-trace camping methods.

One may readily see how this ties into Agenda 21, from the UN Agenda 21 publication.

10.5. The broad objective is to facilitate allocation of land to the uses that provide the greatest sustainable benefits and to promote the transition to a sustainable and integrated management of land resources. In doing so, environmental, social and economic issues should be taken into consideration. Protected areas, private property rights, the rights of indigenous people and their communities and other local communities and the economic role of women in agriculture and rural development, among other issues, should be taken into account. In more specific terms, the objectives are as follows:

(a) To review and develop policies to support the best possible use of land and the sustainable management of land resources, by not later than 1996;

(b) To improve and strengthen planning, management and evaluation systems for land and land resources, by not later than 2000;

(c) To strengthen institutions and coordinating mechanisms for land and land resources, by not later than 1998;

(d) To create mechanisms to facilitate the active involvement and participation of all concerned, particularly communities and people at the local level, in decision-making on land use and management, by not later than 1996.

Today, we have at least two generations that have been indoctrinated well beyond four years (that is key to Agenda 21 implementation) and trained to be good “global citizens” — that it is their duty to be good stewards to the earth, as global power-hoarders define what that is to mean.

As time passes and the collectivist indoctrinated youth grow up, they are to become managers of these wilderness areas. Then, they must make sure the people who are still stuck in their old ways of thinking will see the new ways for them, or be made to comply. As of yet, they have no reliable way of knowing that in today’s world, this repackaged socialism is just a vehicle for the ever increasing tyrannies of a new style of totalitarian control, aided by technology generating the ability to monitor virtually everything about our lives — a system of which Lenin could have only have dreamed. And if these plans are allowed to fully come to fruition, there will be no more free ranchers, farmers, or citizens.