As the adage goes… ‘Sunshine is the greatest disinfectant’ and in the case of Benghazi… Persistence finally brings the disinfecting sunshine and the truth. 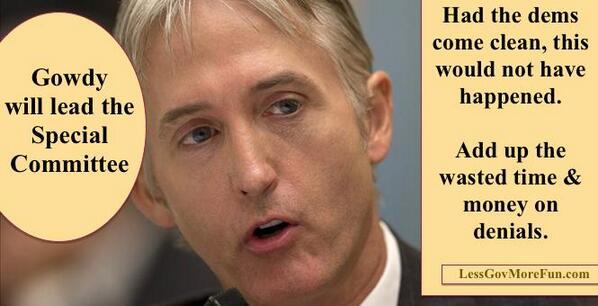 Thanks to Judicial Watch and several new informants coming forward to speak out… the truth about Benghazi is finally coming to the forefront and will come out, especially with the appointment of a special committee headed up by Congressman Trey Gowdy. Gowdy tweeted: I applaud @SpeakerBoehner for his decision to establish a Select Cmt on #Benghazi and am honored to serve as Chairman. Rep. Trey Gowdy said Friday that he has evidence of a “systematic, intentional” effort by the Obama administration to withhold documents from Congress (see video) about the 2012 Benghazi attacks that killed four Americans. Gowdy is a ruthless, winning and spiritual prosecutor and is the perfect man for this job! Something positive that Speaker Boehner can finally take credit for. The newly-named chair of the Congressional select committee on Benghazi says he wants to see ‘every solitary, single document’ related to the deadly terror attack in a segment on Greta Van Susteren’s “On the Record” via Fox News Monday.

The White House is so worried right now that Benghazi is at the forefront of their target agenda. They dangled Press Secretary Jay Carney out in front of the White House press corps, that has finally found their voice, to be skewered again… first thing on Monday morning 05.05.14, for what certainly must have seemed like an eternity to him. We can always be sure that when the White House or anyone becomes this defensive and focused on any issue that in their words ‘Doesn’t Matter’ or ‘Are Lies’ or ‘Exaggerations’… that the sunshine has found its mark! It proves ‘It Does Matter’, ‘It Does Make a Difference’ and that ‘They Are Guilty of something, if not everything’!! Persistence and the truth finally prevail! It all just took far too long to get to this point because of the mainstream media’s bias and collusion to cover-up for the White House and the Democrats and the total lack of transparency from the Obama administration, State Department and the DOJ.

Over the weekend former CBS anchor Sheryl Attkison talked about the email trail and why the White House and Democrats are still trying to dismiss Benghazi.

Judge Jeanine Pirro’s opening show statement revolved around Benghazi, saying it is the biggest cover up since Watergate

And let us take a little walk down Watergate memory lane (history)… Watergate was all about subverting an election… and the ensuing cover-up that involved the Nixon administration. Excuse me, one might want to ask Gov. Romney, if this Benghazi cover-up wasn’t in large part about subverting an election… his, plus hiding a lot lot more. And let us also remember that nobody died because of Watergate!

Rush Limbaugh reminded his audience that the cover-up links back to Cairo remembering that somebody in our embassy in Cairo, Egypt apologized for something that hadn’t even happened yet. Do you remember? “This whole thing has been a cover-up from the start,” Rush said. Even “Ron Fournier, who used to be and maybe still is one of the biggest promoters of Obama and ‘the Regime’, made it clear on TV today (5.1.14) that as far as he’s concerned now everything the Regime has done in the aftermath of Benghazi has been political. It has not had anything to do with foreign policy.” noted Rush.

And then we come to Ms. Hillary…

Hillary Clinton was fired from the Watergate investigation by Jerry Zeifman, former counsel to the House of Representatives Judiciary Committee, “…Because she was a liar. She was an unethical, dishonest lawyer. She conspired to violate the Constitution, the rules of the House, the rules of the Committee and the rules of confidentiality.” And now she wants to hide from this committee. Presidential material? Not in my book! 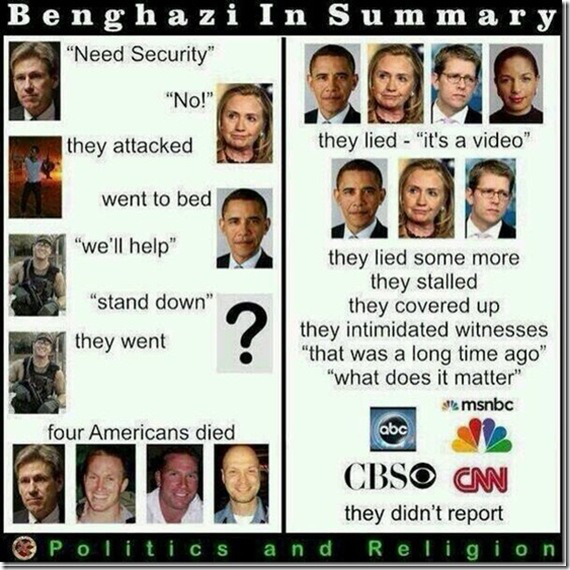 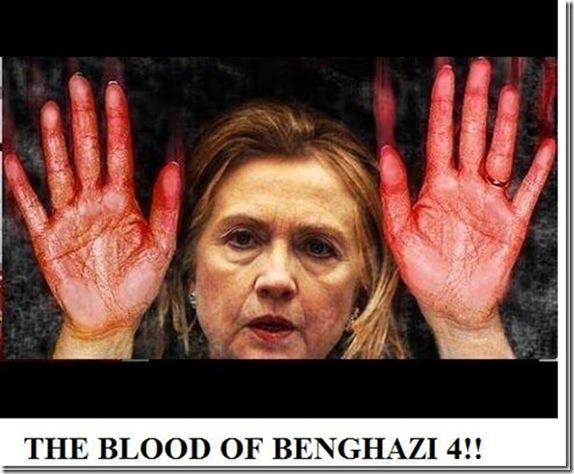 We can only hope and pray that this committee can finally get to the bottom of this scandal and cover-up. The more engaged Americans are, the better the chances. Many are concerned as the Democrats are already saying that they will not participate… will boycott the committee. Jay Carney refused to answer whether the White House will cooperate. In my book that alone is an admission of guilt, for who wouldn’t want to get to the truth in the murder of 4-American heroes, one of which was an American Ambassador? The truth about Benghazi should matter to every American!, no matter what their politics.

Update 05.06.14: Since this was written (overnight), the Progressive Democrats and the White House have circled the wagons.

The White House says they will not cooperate with the special committee.

The Democrats say that Hillary Clinton cannot be subpoenaed because she is now a private citizen.

The Left has rallied their minions to repeat the mantra… “This is old news and the Republicans are on a witch hunt.”

Originally House Minority Leader Nancy Pelosi announced their side (the Democrats) wanted nothing to do with this investigation or committee. Just this week she, Pelosi, said Republicans are engaging in “diversion, subterfuge” by continuing to talk about the attack in Benghazi. “Benghazi, Benghazi, Benghazi,” Pelosi said to reporter. But today they want an equal number of seats at the table… so they can stonewall every request and subpoena and subvert the process.

*Committee structure has been announced… 7 Republicans and 5 Democrats will make up Special Committee on Benghazi.

For those who watched and followed the attack as it happened, overnight on 9-11.12, and then followed the ensuing farce perpetrated by the Obama administration and the State Department through the 2012 election, as we did, they are grateful to finally hear that a Special Committee has been appointed. But now we all know that it is time for results… past time for the truth to come out and time for “heads to roll”!! Hillary questioned, “what difference does it make?” Check out these two interviews below with the parents of the heroes and Hillary’s question is answered!! Plus if it had been Chelsea Clinton… you can bet that it would have made a difference, no matter how long it had been! 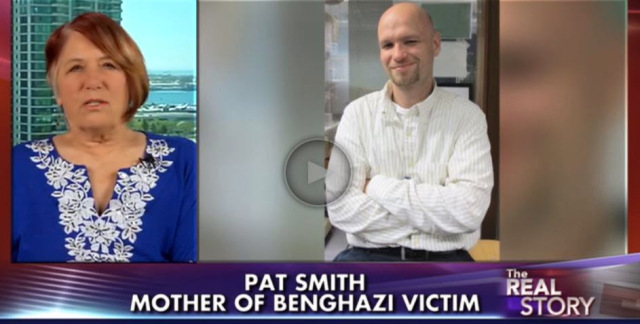 Former GOP Presidential hopeful and TV host, Governor Mike Huckabee, has also had both these parents on his show several times and has followed this story and timeline closely. He called President Obama out this past weekend saying, “I’m coming after you!”

For anyone who has not followed BenghaziGate, check out the timeline at: Bombshell: Pentagon ‘didn’t know’ Benghazi annex existed. The links there will certainly give anyone interested a good overall understanding! And as for nobody knowing what was going on the ground… I had lunch with a friend that has strong ties to the Republican Party, just about a month after the event. At one of their gatherings, the possibility of gun running was already being discussed. Fox News also has confirmed that the intelligence community (including Brennan, Rhodes and Tom Donilon) knew it was terrorism within the first 24-hours… so could there really be any chance that Obama and Hillary didn’t know that? Yet they kept peddling the video story nonsense and lied directly to the faces of the victim’s parents.

And now there is new shocking evidence that links the U.S. Federal Government to the FILMMAKER behind Benghazi fiasco. That’s right… the explosiveness of a ‘smoking gun’ email from a White House Deputy who directed then U.N. Ambassador Susan Rice to blame a video for the Benghazi attack is missing an essential link, a U.S. Federal informant. The man who made the inflammatory movie himself – Nakoula Basseley Nakoula. It seems that Nakoula became an informant for U.S. Federal agents in a deal to capture his recruiter in exchange for leniency; this was granted. When Nakoula’s recruiter was caught, he was amazingly let go by U.S. Federal agents. Read more HERE.

Also check out the video: For the Record – Zero Footprint 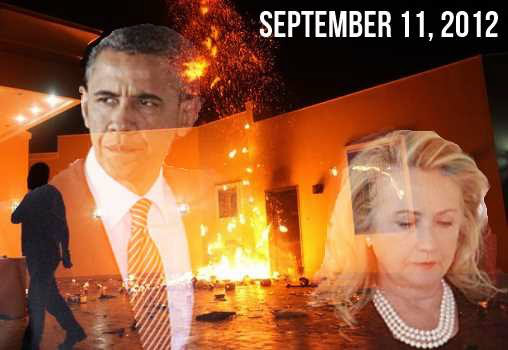 For anyone out there that doesn’t believe in miracles… the fact that Judicial Watch won the battle to get the documents released which included the smoking gun email that now has resulted in Rep. Trey Gowdy being chosen to head up the Special Committee on Benghazi when the Establishment wanted Lindsay Graham, plus the Supreme Court just announced today that prayer at council meetings is Constitutional, should give everyone hope and shore up a few weakened believers that if the American people stand-up, stand-together, get-involved and pray, there is still hope to turn America around. God Bless America and God bless the souls of our murdered Ambassador, 4 American heroes and their parents who deserve closure and the truth!

Sometimes the Lord works in mysterious ways. Perhaps the American people needed this information to be fresh in their minds in order to stop them from making another Obama size mistake? Perhaps the timing of this ray of sunshine is God’s way of saying… “Stop Hillary” and of saving the nation that our Founders felt was under God’s direction and care?!? 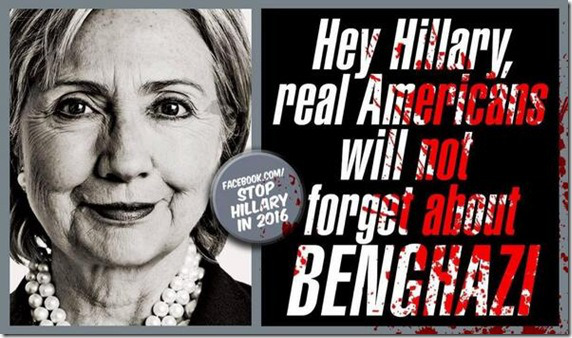 But be aware, President Obama, Hillary Clinton and the Progressive Democrats will do everything in their power to stop the sunshine from getting through to the American people!

2 thoughts on “Sunshine is the Greatest Disinfectant – Updated”