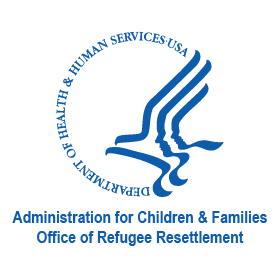 There has not been a ‘refugee’ crisis in the US in my lifetime. The one on our Southern border is a manufactured crisis by Obama and the Progressive Left to employ the Cloward and Piven Strategy of overwhelming the system until it collapses, allowing for the Marxist reformation of government. Enter the Office of Refugee Resettlement. ORR is the government agency that is streamlining the entrance of illegal aliens into the US and then assisting them with resettlement. They work with other government funded agencies, such as the Crittenton Services and Foster Family Agency in Murrieta, California. This agency just placed an ad that is offering over 6k a month to house illegal alien children: 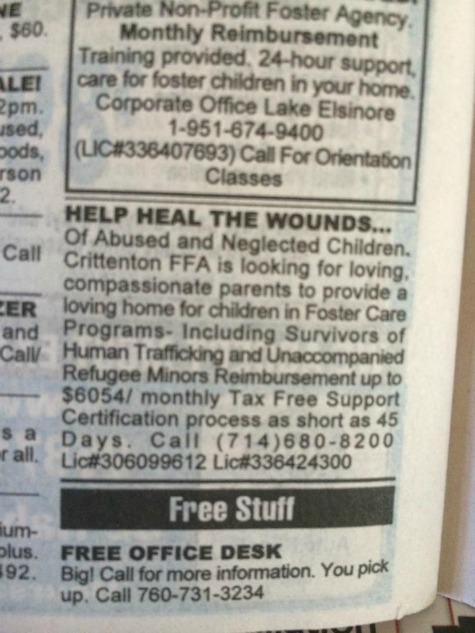 I guess when compassion and guilt aren’t motivating enough, you can always try and bribe Americans. Especially in the depressed economy Obama has created.

HOUSTON, Texas–An ad placed in the Penny Saver Newspaper in Murrieta, California is seeking “loving, compassionate parents to provide a loving home” for illegal immigrant minors, according to a local reader of the publication.

Lisa Maloney Vinton, a Murrieta resident, provided Breitbart Texas with a purported copy of the advertisement, which was put up by the Crittenton Services and Foster Family Agency. It says, “Help heal the wounds … for children in foster care programs including survivors of human trafficking and unaccompanied refugee minors.”

Parents who offer up their homes could have a child placed in their home in “as short as 45 days” and be paid up to $6,054 per month, according to the advertisement.

Cindy Lemos, another Murrieta resident, told Breitbart Texas that she called the number on the advertisement. She said, “I called this afternoon and the gentlemen I spoke to told me that they are receiving the illegal immigrants but that none of them are under the age of 12. I asked him where all the younger children were… he told me that he was wondering the exact same thing.”

That’s a very good question. Another is, would you be bringing MS13 gang bangers into your home? I don’t think that would add to the family atmosphere. The murder rate maybe and drug and weapons deployment, but not family charity or safety.

ORR is directly connected to the HHS, ACF, DHS, DOJ and the Department of State. Part of their overview is that they stop human trafficking… however, what they are doing with illegal aliens is exactly that and they are doing it with millions of them.

Following the Office of Refugee Resettlement (ORR) mission, which is founded on the belief that new arriving populations have inherent capabilities when given opportunities, ORR/ Division of Children Services/Unaccompanied Alien Children program provides unaccompanied alien children (UAC) with a safe and appropriate environment as well as client-focused highest quality of care to maximize the UAC’s opportunities for success both while in care, and upon discharge from the program to sponsors in the U.S. or return to home country, to assist them in becoming integrated members of our global society.

There’s that pesky ‘global society’ monicker again. We bumped into that title in my recent article: ACORN for Illegal Aliens – Meet the Southwest Key Programs. So, a myriad of agencies and companies have all been tasked with facilitating the invasion from the South and you will find ORR leading the cattle roundup. Their end goal is unifying the children with their families — those already here legally and illegally and those who are yet to follow.

You’ve got to admire the double speak coming out of Obama’s goons. On one hand, you have ICE and DHS saying that the illegal immigrants have to go back. On the other, you have Southwest Key Programs and ORR shipping children around in the dead of night off to every corner of the country without notifying anyone in charge. This is happening in my state of Oklahoma and in many, many other states as well. Take Michigan for example:

The current crisis on the southern border, involving tens of thousands of unaccompanied minors from El Salvador, Honduras, and Guatemala, has now become a concern for Michiganders who live in a rural community with less than 3000 people.

Wolverine Human Services, a social services agency which typically helps needy Michigan children, is in the process of securing a contract and negotiating with the Office of Refugee Resettlement to bring between 60- 120 male illegal immigrants, between the ages of 12-17, to the small city of Vassar without any input from residents of the community.

So, you see… they are lying to you yet again. The illegal aliens are being planted in areas to change the voting demographic just as we predicted years ago. While all this shuffling and dealing is going on, we have Guatemala and Mexico fast tracking an agreement to get even more illegals to our border and into the US. This is a concerted effort by these countries with Obama to eradicate our borders and invade the US. There is no other way to view this:

Earlier this week, Mexican President Enrique Peña Nieto and Guatemalan president Otto Perez Molina held a joint press conference to formally announce a new program that will allow Guatemalan citizens to legally travel through Mexico in their effort to enter the United States illegally. Guatemala is one of three sending countries accounting for most of the illegal aliens coming across the U.S.-Mexico border during the ongoing surge. The agreement grants Guatemalans 72 hours of legal status while they make their journey to the U.S.

The “Southern Border Program to Improve Passage” will increase the number of border checkpoints along the Mexico-Guatemala border, provide medical care, and offer Guatemalans a Regional Visitor’s Card. The card grants Guatemalans enough time to make the trek to Mexico’s northern border.

The program will also offer protection and financial assistance for unaccompanied minors who attempt to make the journey.

And while it would appear that Obama is pulling this off even with push back from various groups such as the Minutemen, who have now called 3500 members to the border to protect it, there are cracks in his enforced secrecy of events surrounding the invasion. Politicians are not being allowed to see the illegal alien children except by appointment. There is good reason for this. They don’t stay where they are long. They are sent off to locations across the US before they can be seen with gang paraphernalia and diseases in tow. Reporters are being prevented from coming to the refugee camps. Roads are being closed. But they can’t shut everyone up. Some nurses and doctors have broken their confidentiality agreements to come forward about the atrocious conditions in housing the children. Even some Border Patrol Agents are coming forward accusing Obama of human trafficking and aiding and abetting drug smugglers:

A U.S. Border Patrol agent has gone public with some incredible charges against the Obama administration, accusing it of “aiding, abetting and facilitating the smuggling of illegal aliens across the border.”

The agent, Hector Garcia, told CNN in a recent interview that the current chaos of mass illegal immigration taking place along the southwest U.S. border is being “organized” and “orchestrated” by Mexico-based drug cartels. Not only that, but he said the administration is giving the illegal crossers a “free pass” to remain in the country, noting that federal officials are using the equivalent of the honor system in asking the aliens to report later to an immigration hearing, knowing that the majority of them will never do so.

The agent claims it is an orchestrated, organized effort by Obama and he is right. And while individuals are trying to get the word out, you have the Obama sycophants saying incredibly offensive and outrageous things using Jesus as a propaganda tool:

Jesus Christ should be a role model to people working with undocumented alien children from Central America, says the director of the U.S. Department of Health and Human Services’ Office of Refugee Resettlement.

“Jesus was a refugee, and that’s a very good reminder to all of us,” Eskinder Negash told the four-day U.S. Conference of Catholic Bishops’ Migration Conference in Washington, D.C., according to the Catholic News Service.

More than 50,000 migrant kids have entered the country illegally from Mexico since last October, many of them from El Salvador, Honduras, and Guatemala. They are being called refugees because they have fled their homeland out of fear for their lives from drug gangs and other criminal elements.

Under U.S. law, the kids who come from a country that is not contiguous, such as Mexico and Canada, are handed over to the resettlement agency (ORR) to be placed with family members or housed elsewhere until they face deportation hearings.

“I happen to believe in the refugee program, not just because Jesus was a refugee — because I was also myself a refugee,” Negash, who fled from Ethiopia into Sudan in 1980 after a Soviet-backed military coup. “Yes, I was once described as an alien myself, if that’s a proper term to use.”

That is straight from the head of ORR. But you see, this refugee crisis didn’t just suddenly happen. It was manufactured and in fact, it was done so shortly after dropping the Monroe Doctrine per Obama and Kerry. These aren’t ‘refugees’ in the normal sense… these children are being used as an invasion advance force. The horrible circumstances these people use to pull at your heart strings are true, but many of them are instigated by these same people bringing children here who are recruited by MS13 and sold into slavery. They don’t care about the children. The children are convenient. They care about voting demographics and cheap, slave labor. The children under 12 should be fed, clothed and escorted home. The others should, without further ado, be deported. The border should be closed and all funding cut off to countries South of our border, period. And the next time Mexico accidentally sends troops and bullets across our border aimed at our agents, we should call it what it is: ‘An act of war.’

This is a redistribution of human capital. It is meant to engender a hellish, global society. We are not being given a say, the globalists are making their move and the UN is in the thick of it with Obama. Obama asked for $3.7 billion for the border. He was just turned down, which is a very good thing. Senator Ted Cruz said the following about the Border Bill: “It is 3.7 billion dollars and less than 5% actually goes to border security.” He called it a “Social Services Bill.”

From The Heritage Foundation:

The Daily Signal this afternoon asked Sen. Ted Cruz, R-Texas, what he thinks of President Obama’s request for $3.7 billion in “emergency” funds – about $12 for every American – to address the surge of children from Central America illegally crossing into the U.S. from Mexico. Cruz accused the president of selling a “social services bill” as a “border security bill.” The only way to solve the crisis, he said, is to stop the lawlessness, begin enforcing immigration laws, and secure the borders. “President Obama’s bill doesn’t even attempt to do that,” Cruz told The Daily Signal after an appearance at The Heritage Foundation.

The Office of Refugee Resettlement is a facilitator for a manufactured human crisis. They are just one of many agencies that the Progressives are using to wage war against America and bring her to her knees globally. The US is at war and does not even know it because her own President is fighting on the other side against us. Cutting the purse strings of this social and voter engineering is great, impeachment would be even better. 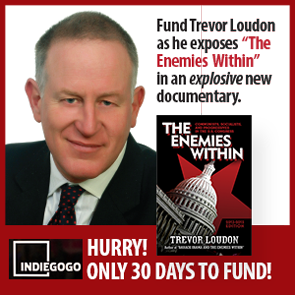