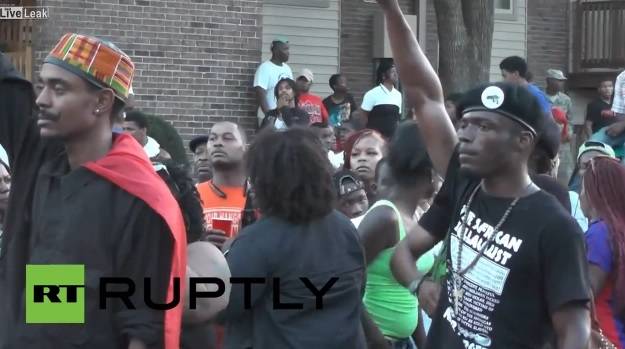 What started as a contested shooting of 18 year-old Michael Brown, has now been nudged into a full blown racial conflict in Ferguson, MO by Communists, the New Black Panthers and the DOJ (yes, you read that right, the US Department of Justice). Trayvon Martin didn’t get the job done, so the race hustlers have moved on to their next racial martyr to incite riots and violence and further the Progressive agenda.

Without a trial or facts entered into evidence… without Constitutional rights employed and innocent till proven guilty assumed… people who hate full time and want us at each others throats literally, have declared officer Darren Wilson guilty of state assassination (per the Rev. Jesse Jackson). The media have provided his name, address, phone number and email to the public and have done everything but draw a map to his front door — scratch that — visually they have drawn a map to his home. He can’t go there anymore. The lapdog media, aka the propaganda arm of the Obama Administration, is furthering mob rule and chaos. What a shock. 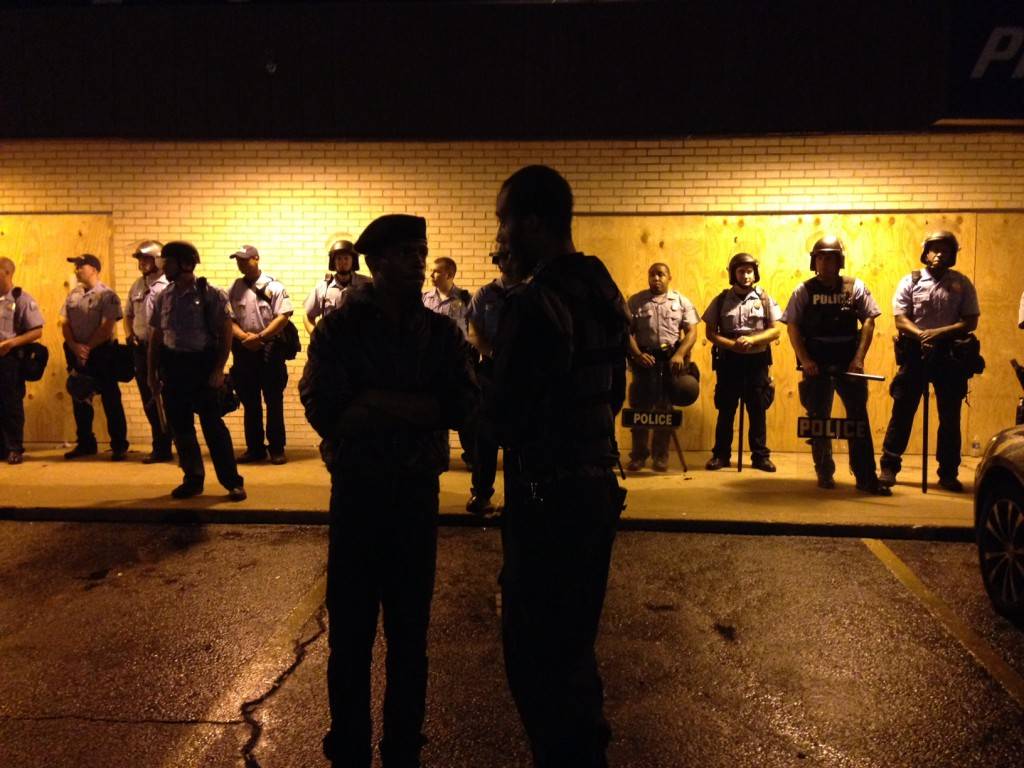 The scene from Ferguson, Missouri on Saturday night. A standoff with police. (Kenny Bahr photo)

Good, hard working people don’t understand why the police now are just standing there doing nothing. Armed to the teeth, they roll in like the military ready to quash riots. Bad, bad PR for the cops and certain leaders freaked out when cops arrested reporters and destroyed their recording equipment. Now, it seems like they have gone the other way and have bowed to political pressure to not intervene. They’ve been ordered to stand down. It’s one thing to protest what you consider to be a wrongful death at the hands of the police… it’s quite another to loot, steal and destroy for the hell of it. People protecting their homes and businesses would like to know why the police won’t just do their job:

The looters have supporters and instigators out en force. Enter the Communists, the New Black Panthers and the DOJ. 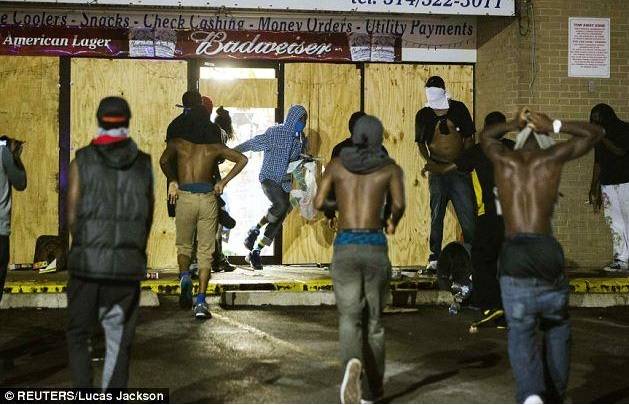 Last night in Ferguson, the New Black Panthers led a massive march of over a thousand people, chanting:

What do we want?
– Darren Wilson
How do we want him?
– Dead

The DOJ is in the thick of all this. Within the group chanting for death to the aforementioned officer, is none other than the Civil Rights Division group known as the Community Relations Service. Think about that long and hard. They are calling for the death of an officer and inciting riots and violence. They are from our government and are here to help. I’ve actually seen pictures of Chief Johnson working with the New Black Panthers during all of this. I mean, what is he thinking? 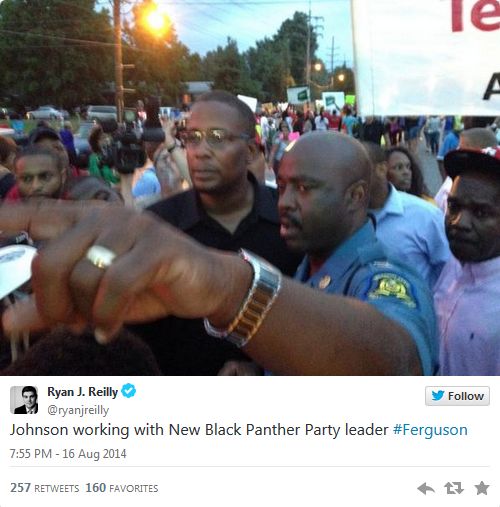 From The Conservative Treehouse:

The CRS is there at taxpayer cost with all expenses paid for by the federal government. So ask yourself this: “why is Eric Holder allowing this type of racial animus”? Why isn’t the police or local law enforcement stopping these visible requests for the death of a public official?

This is the same thing that happened in 2012 at Fort Mellon Park in Sanford Florida.

Exactly right. And the martyrdom of Trayvon Martin continues, along with the long anticipated and yearned for race war that Leftists have been pushing for over several decades.

The New Black Panthers are the black equivalent of the KKK. They hate all white people and they have no problem with murdering adults and children alike. Looting was rampant and one person was shot last night (note: not by a cop). And although The Washington Post went out of their Marxist little way to indicate how many bad guns were present, the seven people who were arrested last night were unarmed. And the New York Times couldn’t help themselves — they just had to blame white people. In point of fact, you should probably lay the blame on Progressives for creating these urban hellholes in the first place. The New Black Panthers warned of other revolutionary groups arriving as well:

From a local source in Ferguson: The New Black Panthers say, “We can not guarantee your safety.” – Three revolution groups are in town. They want absolute mayhem. 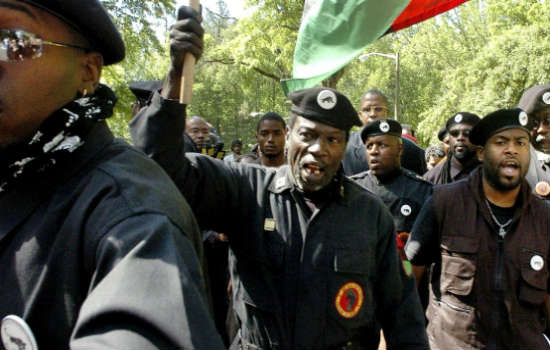 Communist groups such as the Revolution Club Chicago arrived early on and were the instigators of unrest. Now there are several reports that Chicago Communists and New Black Panther leaders have infiltrated the protest movement in Ferguson, Missouri.

Here’s the inside scoop on the latest violence in St. Louis. There’s a lot of buzz on the ground about a communist group that was bussed into Ferguson from Chicago. They provoked the police with Molotov cocktails the night of August 13th while the local protesters peacefully protested. That’s when police responded with gas and flash grenades. Their reported goal is to make the protests go super-violent, spread across the region, and spark a revolution. They are said to visibly stand out from the local protesters in how they respond to police and intimidate reporters when photos and video are taken of them. Expect to hear more about this in the coming days. H/T Ed & Kenny 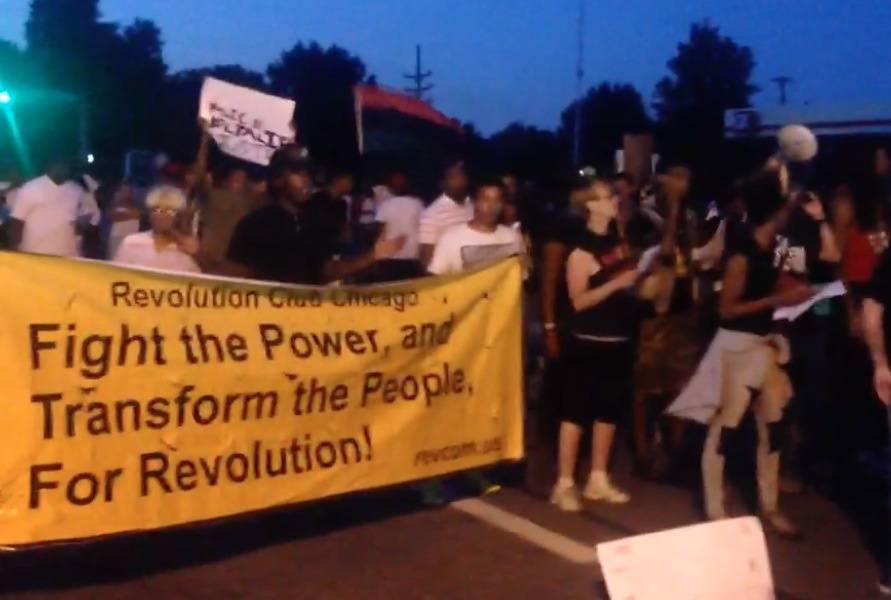 So, you’ve got white Chicago Communists and the uber racist New Black Panthers fomenting chaos, violence and rioting. You’ve got the DOJ on the ground and in the mix and praying for an excuse to declare martial law.

From the New American:

Fox News staffers uncovered more from Kweli’s Facebook page: “This is the hour all the greats promised. If you die, die like a warrior. I’ll see you on the ground.”

On Wednesday the group made a list of demands, along with other groups including the Nation of Islam and the Organization for Black Struggle. Part of the list mandates that the officer involved in the shooting of Michael Brown on Saturday be fired and charged with murder.

On Friday morning the New Black Panthers made their presence felt by taking over a press conference scheduled for Ferguson’s Police Chief Tom Jackson. The group’s leader, Hashim Nzinga, grabbed the mic and ranted to the audience gathered there, criticizing President Obama, calling him a “Mau Mau” from Kenya, adding, “He need to go back to his roots and stop people from killing Africans in the streets.”

The Panthers is the same group that tried to stir up trouble in Sanford, Florida, following the shooting of Trayvon Martin by George Zimmerman back in 2012 when it announced a bounty of $10,000 for the capture of Zimmerman — “dead or alive” — resulting in Zimmerman going into hiding. When asked at the time why the party was deliberately inciting violence there, then-leader Mikhail Muhammad answered: “An eye for an eye, a tooth for a tooth.”

These are the same thugs who intimidated voters during past elections. They are a tool of Marxists and Islamists and they are deadly.

When they took over, Chief Johnson left the area. What they should have done was take back control. This sets a bad precedent of the police backing down to violent thugs. You can bet all of this was a result of a call from Eric Holder. Eric Holder, who is now ordering a third autopsy of Brown, because he didn’t like the findings of the first two. Meanwhile, the New Black Panthers and their marchers are ignoring the imposed curfew and the place is one breath away from martial law.

You’ve got Communists and the New Black Panthers, along with race hustlers and our own DOJ ginning up violence in Ferguson. It’s their vision for all of America and they want to set the country on fire. We now have so many emergencies going on, from Amnesty to Ferguson… Iraq to the IRS/EPA… that Americans are overwhelmed. Just as was intended.

As one Chicago thug famously said, “You never want a serious crisis to go to waste.”

Don’t have a nice crisis for your chaos party? No problem: the Communists and the New Black Panthers have your back. Just call 1-800-VIO-LENT, and they can bring your custom crisis & chaos right to your door. And you get the racial conflict at no extra charge. And who knows, they may even throw in martial law as an added bonus.