I worked for two major airlines for 40 years before I retired. In the 30 years I worked for Pan Am our aircraft routinely became the targets of Islamic attack because we were a worldwide symbol of America. The downfall of that great airline shortly followed the bombing Pan Am Flt. 103 over Lockerbie, Scotland by Muslim terrorists from Libya. The last day I worked for Delta Air Lines was January 2, 2002 and the last four months of my career in aviation was unlike anything I care to remember. It followed the Muslim attacks on September 11, 2001. I got a phone call that 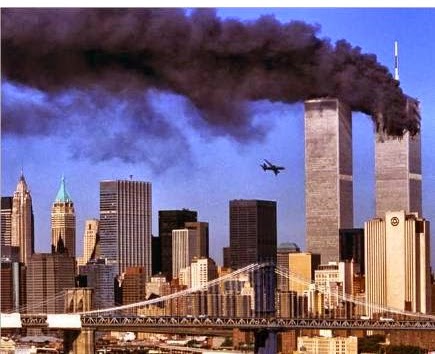 morning from a neighbor telling me to turn on my television. “What channel” I asked – the reply – any of them. As millions of other Americans did that morning I began to watch as live coverage from New York City came on with the burning of tower 1 of the World Trade Center. The news commentators were in bewilderment as to the cause. Some reported rumors that an airplane had flown into the building. Then as we all watched on live TV, a second airplane flew into tower 2 with a horrible explosion. At that moment it became crystal clear America was under attack.

We learned in the days that followed that the four commercial airplanes involved in the attack had been hijacked by 19 Muslims who all committed suicide in the name of their so-called religion in order to kill as many Americans as possible. Yet to this day leftist politicians and news media refuse to acknowledge that Islam motivates terrorism and is committed in the name of Islam. Those Muslims flew another airplane into the Pentagon in Washington, D.C. and the fourth airplane, also headed for Washington was brought down by some courageous passengers who had received cell phone calls from family about the earlier attacks and tried to overpower the hijackers. 15 of the 19 Muslim hijackers came from Saudi Arabia, a fanatically extreme religious country that was supposed to be an ally of America but whose members of the royal family openly financed terrorist activities. Now today, 13 years later, more Islamic terrorists have overtaken the airport in Tripoli, Libya and have now commandeered 11 more commercial jetliners.

The whole world changed that day. Muslims danced in the streets in every Muslim city when they learned of the attacks on America and a lot of people elsewhere began to take a serious look at Islam. We have learned a lot about Islam in these last 13 years. It is a brutal and barbaric religion that still functions by rules created by its prophet Muhammad 1400 years ago. Today, Islam is a political and military culture that dominates the lives of 1.5 billion followers worldwide. While there are two major factions of Islam, the Sunni and the Shi’ites, that have been at perpetual war with each other since the death of Mohammed in 632 A.D., there is only one text or scripture followed by all of Islam. And that scripture proclaims to all Muslims that they will dominate the world. A decade followed the attack on New York City Muslims openly brought this message back home. 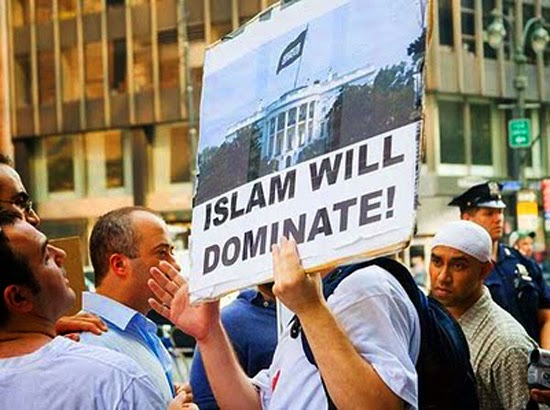 Worse yet is the power and influence of the Middle East money into our government and into our politics and into our leftist news media. This wealth has bought them the leadership and many members of the Democratic Party, virtually all of our education system and our news media. While our Christian faith and God has been removed from our classrooms, Islam has been brought in at almost every level. Seven short years after the Islamic attack on America, with the help of liberals from all walks of life aiding the cover-up, a Black Muslim Democrat who had communist parents and a card-carrying Communist mentor as a child, was elected to the highest office in the land with a promise to fundamentally change America. With Barack Hussein Obama’s help, the Democratic Party leaders allowed the Muslim Brotherhood to infiltrate the highest positions in our government. Academics, with the aid of numerous Muslim organizations on college campuses, meanwhile were twisting and rewriting our history and have turned out a generation of youth who are ignorant of current events. And a liberal pro-Democrat news media, that heaps recognition daily on  groups like CAIR, the Council on American-Islamic Relations, that was identified in court as an unindicted, co-separator to a terrorist finance scheme run by the Holy Land Foundation, willfully fails to report the true involvement of Muslims in America’s government or responsibility with terrorist activities. Now the Muslim in The White House, who openly proclaimed he would stand with the Muslims, has begun to purge our military of all officers who do not swear allegiance to him and thousands of Generals and lower ranking officers have been forced out. We have become almost totally defenseless save for the tens of millions of gun owners in America who are the ongoing target of every Democrat.

Today Islam is backed by great wealth from the Middle East oil kingdoms and holds great animosity for all things we regard as part of our life in America and in Western Civilization. Our so-called ally Saudi Arabia has spent billions financing the construction of thousands of mosques in America and in Europe for the sole purpose of spreading the radical Wahhabi form of its Islamic religion. The mosques have been established as recruitment and training centers for terrorism. Through these mosques have come thousands of Muslims converted into violent radical terrorists who have been taught that Islamic Sharia Law, as laid out in the Koran must be made supreme over our Constitution because no law that does not come from their pagan god Allah should be followed. Their Muslim imams and clerics have plotted the overthrow of our country and our FBI, hindered as they are by politics, have prevented dozens of new terrorist attacks.

On the 10th anniversary of the Muslim attack, the web site Sharia4America posted this ominous warning: 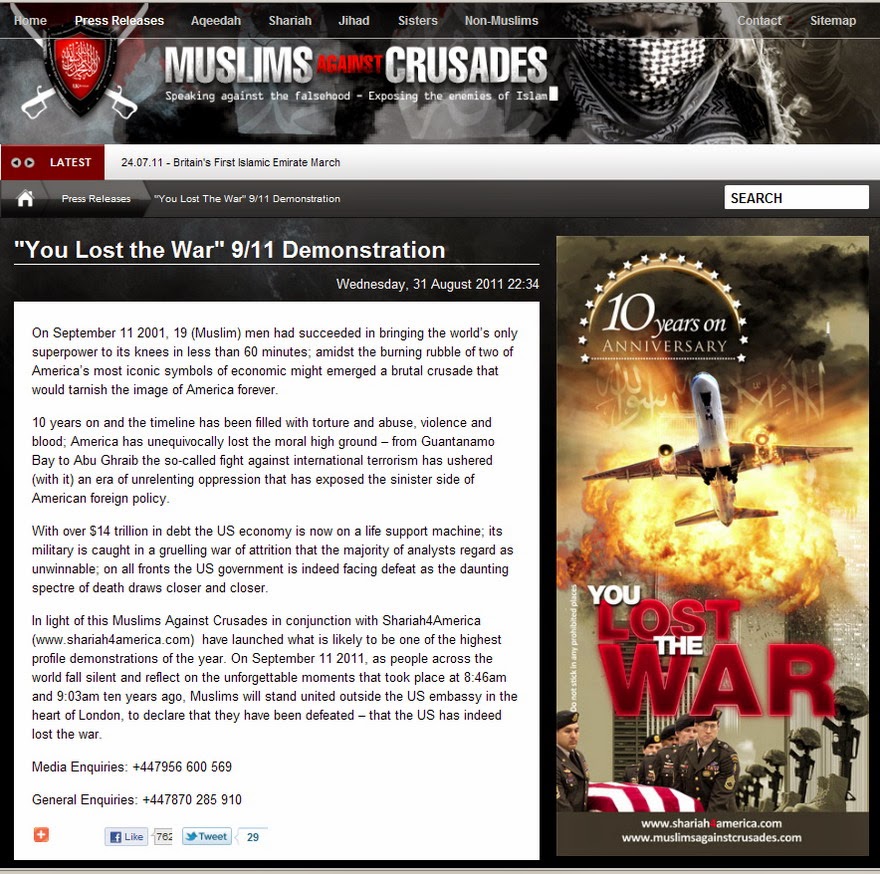 Today the influence of Islam in America is trying to make criticism of Islam a crime. One of the leaders of the Democratic Party, Sen. Harry Reid, has propose a Constitutional Amendment to rewrite our 1st Amendment Freedom of Speech to prevent criticism of the corrupt actions of Democrats. Islamic Sharia Law and the interests of the Democratic Party are running hand in hand. We are a nation at war and Islam is our self-professed enemy and the Democrats have become their ally and our citizens have been kept in the dark and that is the way the Democrats and the Muslim Brotherhood wants it. We must never forget this and we must never forgive this, ever. 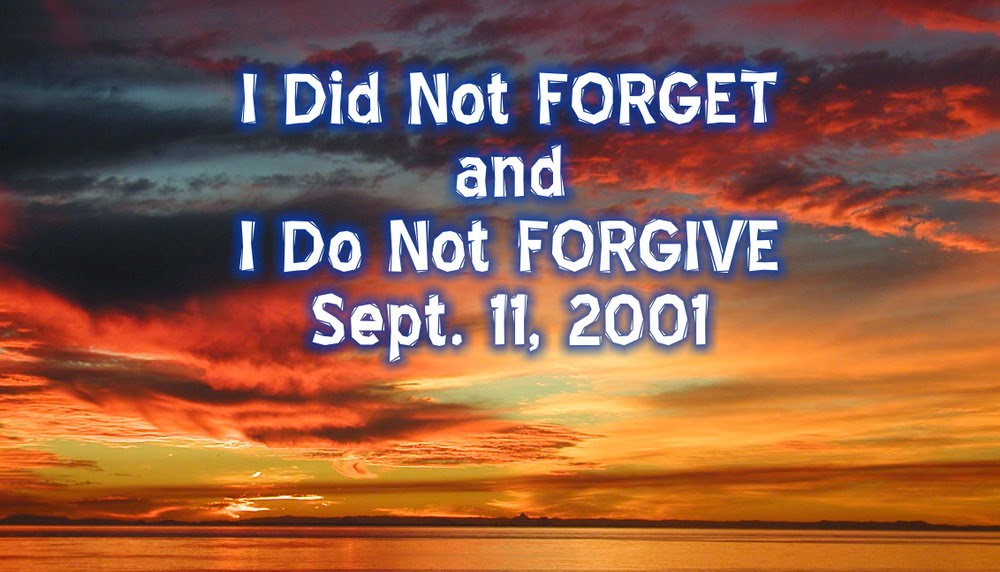