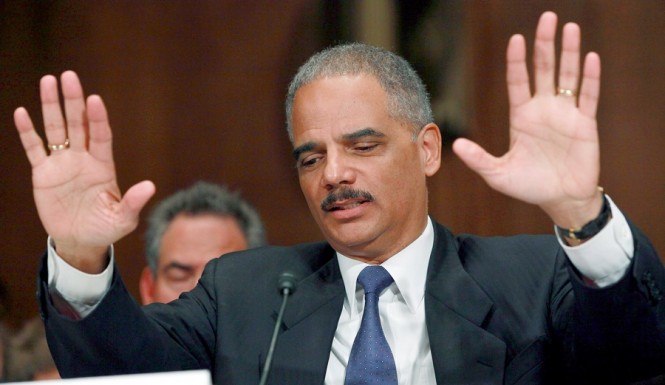 I should be thrilled at the news of Obama’s number one henchman stepping down. Instead, I find myself cringing in dreaded anticipation of what follows next. You just know it can’t be good.

The first thing I heard was that Holder was stepping down because of Fast and Furious. Though he is leaving the scene of the crime, he is still under Congressional investigation. A judge has denied a delay requested by the DOJ concerning the document list connected to the case. The documents had previously been withheld under Obama’s claim to executive privilege:

The list, better known as a Vaughn index, was requested through a June 2012 FOIA filing by government watchdog Judicial Watch. When DOJ didn’t respond to the FOIA request in the time required by law, Judicial Watch sued in September 2012, seeking all documents DOJ and the White House are withholding from Congress under executive privilege claims. President Obama made the assertion on June 20, 2012 just moments before Attorney General Eric Holder was held in contempt. In July 2014, after two years of battling for information, Judge Bates ordered the Department of Justice to release the Vaughn Index by October 1. DOJ responded by asking for a month long delay in releasing the list with a deadline of November 3, just one day before the 2014-midterm elections. That request has been denied. A short delay was granted and DOJ must produce the Vaughn index by October 22.

“The government’s arguments for even more time are unconvincing,” Bates said in his ruling. “[S]eventy-five days—plus another twenty-one, based in part on Judiciary Watch’s consent—is enough time for the government to prepare the index that this Court has ordered, given that this matter has been pending for over two years. The Court will therefore extend the Department’s Vaughn index submission deadline to October 22, 2014—and no further.”

The House Oversight Committee is also suing for the release of the Vaughn index and earlier this month U.S. District Court Judge Amy Berman Jackson ordered DOJ to produce requested information to lawmakers by November 1.

This scandal and Holder’s flat out refusal to cooperate, landed him a Contempt of Congress charge, which he is still subject to. Most legal experts, though, believe he will walk. Sigh. However, that being said, Judicial Watch believes they are very close to nailing Holder’s hide to a wall:

“In Eric Holder, President Obama found his John Mitchell – an attorney general who would lie, obstruct investigations, and ignore or simply not enforce the law in order to advance his president’s unbridled will,” Fitton said. “As the press is writing his political epitaph, I hope it is also remembered how Holder lied to Congress and how his agency assaulted Freedom of the Press by collecting the private email correspondence of reporters, seizing their phone records, and tracking their movements as part of an investigation of perceived leaks. ‘Justice’ took a holiday during Eric Holder’s reign at the Department of Justice. The man can’t leave office soon enough.”

Obama was tearful when making the announcement. Horsepuckey… Holder isn’t going anywhere… he’s shifting. And one possible shift is just too horrific to contemplate. Rush Limbaugh floated the possibility that Holder is stepping down so he can be nominated for the Supreme Court. Words fail me and the cringe thingie is getting worse. By all that is Holy, please let Rush be wrong this one time. Please. 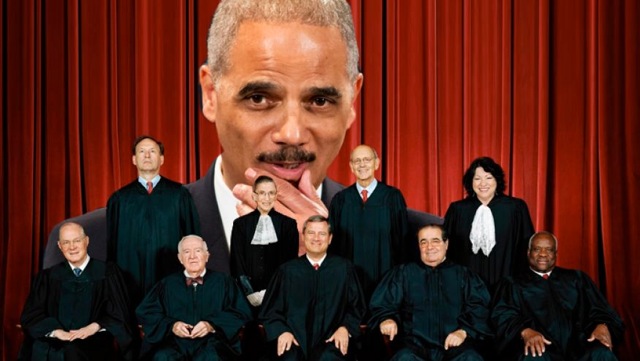 Holder is a huge racist and let’s not forget that golden oldie where he called us a nation of cowards. Civil liberties hero, my ass. Holder has the lowest approval rating of any political figure and he’s earned it. He has shamed the office of Attorney General and besmirched the office he rules with an iron, hate-filled fist. Trust me when I say this evil Marxist will never go away if he has his way.

If you can believe it, race hustler extraordinaire, Al Sharpton, claims he is helping pick the next Attorney General. Racists of the White House unite! There’s enough hate and power mongering to go around for all. Sharpton claims to be ‘advising’ on this… he’s such a braggart and so full of himself, it may just be so much bullcrap, but it wouldn’t surprise me in the least if he was helping with the selection. Let’s see… his credentials include: racist — check; hate monger — check; Marxist — check; Progressive — check; corrupt official — double check… looks like he fits the bill for the Obama Administration.

But there are those that will fight this tooth and nail, Ted Cruz is chief among them. He called for Holder’s impeachment and now he intends to make sure Conservatives have a say in the next Attorney General of the United States. And Cruz has a plan:

Cruz, who has previously made the case for impeaching Holder in an attempt to have a special prosecutor investigate the IRS, doesn’t want a confirmation battle to take place during the lame-duck session.

“To ensure that justice is served and that the attorney general is not simply replaced with another extreme partisan who will likewise disregard the law, the Senate should wait until the new Congress is sworn in before confirming the next attorney general,” Cruz said in a Thursday afternoon statement.  “Allowing Democratic senators, many of whom will likely have just been defeated at the polls, to confirm Holder’s successor would be an abuse of power that should not be countenanced.”

Republican senators have the ability to slow down the process.

“With Republican opposition, any nominee could take as long as three weeks before even clearing the Senate Judiciary Committee, because of rules that guarantee them, as the minority party, a chance to delay the vote,” the Los Angeles Times explains. “Following that, the Senate floor debate could take a week to clear all the procedural hurdles at the Republican minority’s disposal to stall the vote.”

Get em, Ted! He seems to be one of the very few in our halls of power with the stones to take on the bad guys. Why, his actions are almost Presidential! 😉

Obama’s enforcer, Eric Holder, is exiting stage far Left… Let’s hope that Ted Cruz and his brethren make their advance from the Right and take the field. Bring the action.