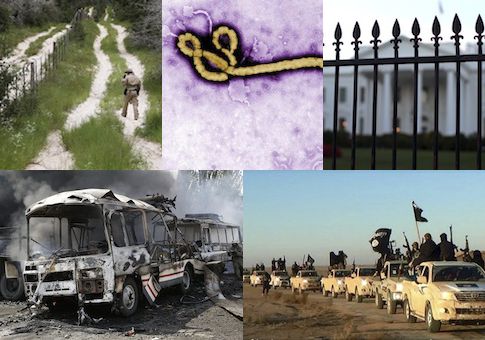 There’s a fantastic post at The Washington Free Beacon: The Case for Panic, by Matthew Continetti. When I read it, it hit a chord within me and I found myself agreeing with Continetti over and and over again.

My head spins at the number of emergencies currently being foisted on America.

Let’s begin with an unstable man, who has been caught before, near the White House. He not only jumps the fence, he knocks over a female officer at the mansion’s double doors before he dashes into the ornate East Room. He gets into the building through an unlocked door and the off-duty female officer gives chase and tackles him. Phew! Turns out the alarm had been turned way down, because the staff found it annoying. But it gets better… there have been over 1,000 security breaches at the White House it turns out, not the least of which includes 7 shots being fired into the building. Guess who found the rounds and reported the fire? A maid on the third floor. The security staff thought it was backfire from a car, I kid you not. Have you ever heard a car backfire 7 to 10 times in a row? Neither have I. Then there was the contractor who was armed and had a criminal background who was allowed to ride alone with the President in an elevator at the CDC. This all leads to Julia Pierson, the first female director of the Secret Service, resigning last week. I have no respect and a severe distaste and distrust of Obama and everyone around him, but can you imagine the chaos that would ensue if he, or anyone in his family, were harmed? It would be epic. Not only that — for the sake of the nation — our president should be closely guarded. Period. So… security of the most powerful man in the world plays like something from the Three Stooges, only without the humor and with more pain.

Then there is the rise of the Caliphate and ISIS with, of course, Obama’s help. Another British aid worker was beheaded yesterday and on tap… a vet — an Army Ranger. But next to nothing from Obama. He bombs empty buildings at night and deserted oil fields from which the oil has been diverted or is not flowing any more and claims he is a war hawk. What a load of Islamic crap. We have a Muslim President who aids and coddles the Muslim Brotherhood, facilitates al Qaeda and ISIS, and is helping the Iranians nuke up. All the while taking money from Qatar and bowing to the Saudis, while dissing our closest ally, Israel. Nothing to see here… just the silent invasion and subversive coup of America as Obama brings in tens of thousands of Muslims from foreign lands and lets them set up shop in America, with obeisance to Mecca and Allah. But when an American Christian woman gets beheaded in Moore, Oklahoma… crickets. He’s too busy fundraising and golfing to attend to what he euphemistically entitles ‘workplace violence.’ Just another infidel, as the bodies pile up. Not to mention the other woman who was stabbed, the other Jihadist who threatened yet another woman in the same town, or the Arab man who got into a high school through an unlocked door and asked around for how many cops were there and how far they were from a police station. Nothing to hold him on, so they let him go. If you see something, stuff it, I guess. A 29-year-old Jihadist kills four men this summer in a murderous spree and no one reports on that either, except Michelle Malkin. Numerous terrorists have come out of Seattle and killed people — the media silence is deafening. I guess if you are a Christian or a Jew and you are murdered by radical Islamists in the US it doesn’t matter — one less Constitutional Conservative to worry about on the Progressives’ way to utopia. And so it goes for the Chechen terrorists in Boston who blow up a child. Our Administration is more concerned with the rights of the bomber who survived than the family of a fallen child. And don’t even get me started on the atrocity that is Ft. Hood. Jihadist mass murder labeled mere ‘workplace violence’ and forgotten.

A new Axis of Evil has formed between Russia, China and Iran and we have already begun World War III. The dollar will soon no longer be the world currency. We are broke and have reduced our military and weaponry to the point of default surrender to our enemies. Russia and China have beefed up their military forces in the extreme. Russia is fighting the free world with radical Islamist proxy countries, while playing RISK and invading neighboring lands. Russia and China are both gobbling up natural resources across the planet, while forging alliances with everyone out there, because no one wants to bet on the weak American horse anymore. It is only a matter of time before the Axis attacks from space with weapons, through computerized cyber attacks or just uses nukes as weapons of instant death or EMPs, which could be even more lethal in the long run. Red Dawn is upon us, a consequence of Obama’s deliberate weakness and kneeling before our enemies.

Then there is pestilence… some brought by the illegal alien hordes that Obama welcomes with open arms as long as they vote Progressive. But they bring so much more than votes and slave labor; oh yes. They bring TB and Scabies. They bring Enterovirus-68 — a really virulent respiratory disease that primarily targets children and brings with it paralysis, similar to Polio. Last week, two adults who caught it died. Business is a-booming for morgues and mortuaries across the country thanks to Obama, his policies and his lack of responsibility and leadership. The disease is now in 40 states and thousands have it. Thousands. He didn’t just set out to destroy America — he’s murdering her citizens as well.

But as deadly as that is, it pales (as in a pale horse cometh) next to Ebola. Obama is banning flights to Israel, but ensuring that African flights keep coming to America. So, now we have one confirmed case in Texas (who is critical and probably isn’t going to make it), with a second probable case and hundreds suspected of being infected, including at least five children. The CDC and DHS lied about most of this. According to various reports, the guy came into the hospital four days after landing. Was sent home with antibiotics and came back in an ambulance two days later. His stepdaughter called the ambulance, but didn’t find out he had Ebola until she watched the news. It took days before she was told to stay indoors with other family members. There is no quarantine notice that I could see on their apartment. The man threw up copiously outside and the city had an unmasked man power wash the vomit. No one has come to clean out the infected bedding etc. from the apartment and on it goes. Did you know, according to Reuters, people were taking ibuprofen to pass screening at airports? It can take up to three weeks for symptoms to show. We have one in Hawaii, one in Georgia, two in Kentucky, one in Minnesota and one in DC that I know of. And this morning, a United flight came in to Newark, NJ via Brussels with Liberians on it. One of them was vomiting on the plane. They landed and the CDC showed up in HAZMAT suits. They took the father and daughter to the hospital for observation and quarantine. They let the rest of the Liberians and 250 passengers go. Let the games begin and spread. These flights are crawling with death if Ebola is present. It’s like a remake of The Stand. Remember, the mortality rate for Ebola is as high as 90% and there is no cure. That vaccine they had is now useless. As I understand it, the disease has mutated more than 50 times since this started. We are told by the powers-that-be they have it under control, not to worry and just pretend everything is okay. Tick, tick, tick… Obama claimed it couldn’t happen, yet it has. But then again, he claimed that if you like your doctor and insurance, you can keep them. In a sane world, the borders would have been closed, flights from Ebola-stricken countries would have been halted and security would have been heightened to watch for terrorists who would infect themselves to become walking, human bombs. But sanity has nothing to do with this. It is all for power, greed and the furtherance of Islam.

The lies have become so blatant, that anything goes. The truth no longer matters, as the elite plan to rewrite it all anyway.

Over the last few years the divergence between what the government promises and what it delivers, between what it says is happening or will happen and what actually is happening and does happen, between what it determines to be important and what the public wishes to be important—this gap has become abysmal, unavoidable, inescapable. We hear of “lone-wolf” terrorism, of “workplace violence,” that if you like your plan you can keep your plan. We are told that Benghazi was a spontaneous demonstration, that al Qaeda is on the run, that the border is secure as it has ever been, that Assad must go, that I didn’t draw a red line, the world drew a red line, that the IRS targeting of Tea Party groups involved not a smidgen of corruption, that the Islamic State is not Islamic. We see the government spend billions on websites that do not function, and the VA consign patients to death by waiting list and then cover it up. We are assured that Putin won’t invade; that the Islamic State is the jayvee team of terrorism; that Bowe Bergdahl served with honor and distinction; that there is a ceasefire between Ukraine and Russia.

While the public remains pro-Israel, our government negotiates with Israel’s enemies. While the public wants to reduce immigration, the preeminent legislative objective of both parties is a bill that would increase it. While the public is uninterested in global warming, while costly regulations could not pass a filibuster-proof Democratic Senate, while the scientific consensus behind the green agenda is, at the very least, fraying, the president says that climate change is the greatest threat to the United States. While Americans tell pollsters their economic situation has not improved, and that things are headed in the wrong direction—while even Democratic economists acknowledge the despondent state of the middle class—the president travels to Chicago to celebrate his economic recovery.

These disjunctions and confusions, these missteps, scandals, and miscalculations, have hurt Obama’s approval numbers. They endanger the Democratic Senate majority, contribute to the widespread sense of disorder and decay, shatter trust in government and in public institutions. They have put into stark relief a political class dominated by liberal partisans, captured by ideas and interests removed from those of ordinary Americans. The stories of ineptitude or malfeasance that appear in the daily newspaper are more than examples of high ideals executed poorly. They are examples of the pursuit of ideas—of equality and diversity and progress and centralization and environmentalism and globalization—to absurd and self-destructive limits.

It all follows the communist agenda laid out by the Progressives and Obama. What we see as failure and incompetence, they view as strategic success.

Continetti is right… things are about to get very weird indeed. War is the thunder and plague is the lightning and it is upon us. Hope and change is so yesterday… today it is fear and chaos that reigns. Maybe it’s time to consider panic.

18 thoughts on “War Is The Thunder… Plague Is The Lightning”