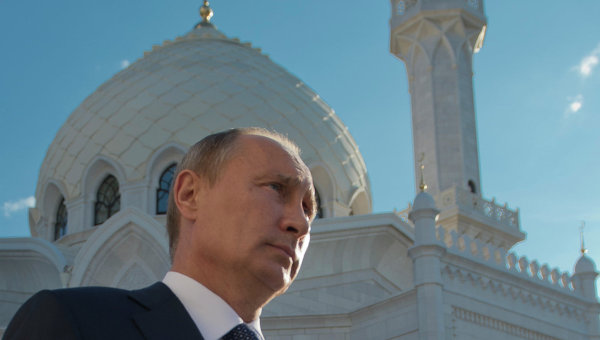 We are already in the beginnings of World War III and the clouds of war are getting darker each day. Who is behind most, if not all, of this? In a word… Russia.

The White House Summit on Countering Violent Extremism had a very interesting guest – Alexander Bortnikov, the director of Russia’s Federal Security Service (FSB, formerly the KGB). Now, exactly why do you think he was there? Considering we are supposedly standing against Russian-backed Marxist-Leninist Ukrainian separatists, while barely backing Ukrainian forces, this makes for some very strange bedfellows. By the way, Russian President Vladimir Putin has said he ordered officials to start work on taking control of Crimea weeks before a referendum which, the Kremlin has asserted until now, prompted the region’s annexation from Ukraine. Putin finally lets slip the truth, which makes Bortnkiov’s attendance even more suspicious. Since it is widely known that the Soviet KGB was hip deep in creating, funding, training and directing a vast terror network that spread over the globe from the 1960s through the 1980s, one has to wonder what Obama could possibly have been thinking when inviting Russia to his counter-extremism event. Russia is the author and master of a great deal of extremism across the planet. Perhaps Obama wanted pointers.

To hit home that Russia is just like the US and the rest of the world, Bortnikov stated that there are 1700 Russian citizens fighting with ISIS and they want to control violent extremism just like we do. I’m sure he’s referring to the Chechens. Well, that may be true, as we have no intention of controlling it either. Sly words from an old Russian bear. Under the guise of security, Russia is proposing that our intelligence services and the FSB partner up. Not only that, Russia wants us to ally with Iran as well. That is one of the most frightening propositions I have ever heard in my life. It should make every American head for the bathroom.

Consider this… Russia is behind ISIS and other terrorist groups. They fund both sides of the fence – whatever benefits them in the end the most is what they endeavor to do.

In his book Disinformation (2013), former high-ranking Soviet-bloc defector Lt. General Ion Mihai Pacepa, who served as chief of the Securitate, the Department of State Security for Communist Romania, revealed the Soviet Union’s role in exploiting and radicalizing Muslims against the West:

By 1972, [Yuri] Andropov’s disinformation machinery was working around the clock to persuade the Islamic world that Israel and the United States intended to transform the rest of the world into a Zionist fiefdom. According to Andropov, the Islamic world was a petri dish in which the KGB community could nurture a virulent strain of American-hatred, grown from the bacterium of Marxism-Leninism thought. Islamic anti-Semitism ran deep. The message was simple: The Muslims had a taste for nationalism, jingoism, and victimology.

A predecessor to Bortnikov, Yuri Vladimirovich Andropov was the longest serving chairman of the KGB (1967 to 1982) and briefly general secretary of the Communist Party of the Soviet Union (CPSU) from 1982 until his unexpected death in 1984. Pacepa refers to Andropov as the “father of today’s anti-Semitism and international terrorism.”

If you dig deep enough behind the radical Islamist groups and behind those moving Europe, you will find Russia. In the end, Russia wants the destruction of Israel and the US. They are in the way and a nuisance to their global agenda. Vladimir Putin has called Andropov an “outstanding political figure.” Along with his admiration of Andropov, Putin is reviving the cult of personality for Communist dictator Joseph Stalin, the restoration of the Soviet Union’s national anthem as the anthem for the Russian Federation, military invasions of Georgia and Ukraine and the erecting of statues to former Soviet Communist leaders such as Yuri Andropov. He is orchestrating intense nationalism within Russia, using the Russian Orthodox Church as an instrument to do so and to justify his aggression in Europe. Radical Islam is another tool being used to clear the way for Russia across the planet. One that is deadly and effective.

Russia has used terrorists in many ways… to create chaos so they can move in and snap up natural resources and to pave the way for geopolitical conquest. They even use them within their own country to set up false flag events to further their political agenda. You see, the alliance between Russia and the Islamists has each of them thinking they will win in the end after they have worked together to bring down their biggest enemies: the US and Israel. Take for instance, Ayman al-Zawahiri. On July 16, 2005, the Polish newspaper Rzeczpospolita published an article in which Litvinenko identified that al-Qaeda second-in-command “Ayman al-Zawahiri trained at a Federal Security Service (FSB, former KGB) base in Dagestan in 1998.” According to Litvinenko, al-Zawahiri “was transferred to Afghanistan, where he had never been before and where, following the recommendation of his Lubyanka chiefs, he at once … penetrated the milieu of Osama bin Laden and soon became his assistant in Al Qaeda.” In 2006, the FSB poisoned Litvinenko with radioactive polonium-210 and he died horribly in a hospital on November 23, 2006. With the assassination of Osama bin Laden by US Special Forces on May 2, 2011, Ayman al-Zawahiri, whom Litvinenko had previously referred to as “an old agent of the FSB,” became the leader of al Qaeda. That was not a coincidence. The Russians have used a carefully orchestrated plan to spread disinformation and terror across the planet. They have been using terrorists to assist in their plans for over 40 years. Successfully, I might add.

And as terrorism engulfs the planet, there are other stirrings. Russia’s anti-American fervor is now at a fever pitch.

After a year in which furious rhetoric has been pumped across Russian airwaves, anger toward the United States is at its worst since opinion polls began tracking it. From ordinary street vendors all the way up to the Kremlin, a wave of anti-U.S. bile has swept the country, surpassing any time since the Stalin era, observers say. […]

There are drives to exchange Western-branded clothing for Russia’s red, blue and white. Efforts to replace Coke with Russian-made soft drinks. Fury over U.S. sanctions. And a passionate, conspiracy-laden fascination with the methods that Washington is supposedly using to foment unrest in Ukraine and Russia.

Today’s anti-American fervor in Russia exceeds that of the Soviet era and the Cold War. Putin is stoking American hatred every chance he gets – we are his scapegoat and as I said before, America must be brought to her knees and destroyed, so that Russia can fully ascend.

Russia is also ratcheting up their military provocations. Their fighter jets have been using NATO ships in the Black Sea as target practice to run “attack scenarios,” a situation that NATO military officials say they are aware of and are prepared to defend against if necessary. This is just one in an ever lengthening list of Russian military probes to see where NATO, European and American military weaknesses exist. The US is claiming they are providing heavy military equipment to NATO-allied Baltic states to protect themselves, but what they are sending is far too little and they know it. The Russians would not even blink at these minor attempts of deflecting their forces. We’re also sending 3,000 troops for training exercises. None of this is serious and is simply propaganda dressing to make it seem as if Obama gives a crap.

Meanwhile, Jean-Claude Juncker of the EU is calling for them to form an army to show Russia they can defend themselves. They can’t agree on the most minor of issues, much less an army. I’m sure Putin is having a really good laugh over that one. Besides, I think Juncker is calling for this as a way to reunify the EU (not gonna happen) and relieve some of their impending debt doom (also, not gonna happen).

Trevor Loudon believes a European Spring is coming. I agree. An American one could happen as well with all the contrived emergencies and violence being pushed here by Leftists. It’s only a matter of time. Glenn Beck said yesterday that a call to arms, a global depression and a disenchanted youth are in the future and it is critical that Americans be aware of the ramifications before they hit. He’s absolutely right on this one. Russia, the Caliphate and the Shadow of World War III are in play now. If you are looking for the grand architect – look to Russia.

18 thoughts on “Russia, the Caliphate and the Shadow of World War III”