Their slogan is “We’re here, we’re queer. We’re on deadline.” It certainly was queer on April 16, 2015, when the National Lesbian & Gay Journalists Association held its 2015 “Headlines & Headliners” fundraiser in the Prince George Ballroom on East 27th Street in New York City. Take a journey inside the world of gay journalism with Cliff Kincaid, who almost got thrown out of the event. We “name the names” of those in attendance. The next phase of their media campaign is paving the way for “transgendered rights.” After that, who knows?

Over at American Thinker, Pedro Gonzales offers an excellent overview of the GOP field’s positions on Amnesty. Here’s the executive summary: only one candidate has never changed his position on the topic.

“…Jeb, as we all know, supports amnesty for illegal aliens, and he’s proud of it. If he were running in Honduras, I would vote for him in a minute…” 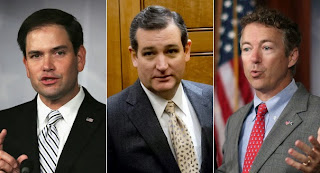 “…Rubio co-authored a bill that would have given amnesty to illegal aliens. He has since tried to walk back from that…”

“…Chris has been cagey on the subject, but one thing is clear: he ordered his appointee to Frank Lautenberg’s Senate seat to vote for Marco Rubio’s amnesty bill…”

“…Perry is tough on illegal immigrants! He sent a handful of national guard troops to the border! (With orders not to arrest any illegals.) But as for those illegals who manage to slip through this imposing gauntlet, Perry rewards them with taxpayer-subsidized college educations. If he’s paying for illegals to go to college, I think it’s safe to say he supports amnesty…”

“…in February 2007, Huckabee … stated, ‘We shouldn’t have amnesty where we just say, “Fine, everybody’s good, we’re going to let it go.’ We should have a process where people can pay the penalties, step up and accept responsibility for not being here legally…”

“…Paul claims he’s against amnesty, but he voted for an amendment to give 2 million ‘temporary’ visas to illegal aliens annually…who could then apply for citizenship. It looks like amnesty to me…”

“Cruz is the only major candidate who has never supported or endorsed amnesty.”

As they say on the real blogs, read the whole thing.