“Another Democrat, Robert Brink, began mocking him… saying,
‘The voters are not concerned with such foolishness.'” 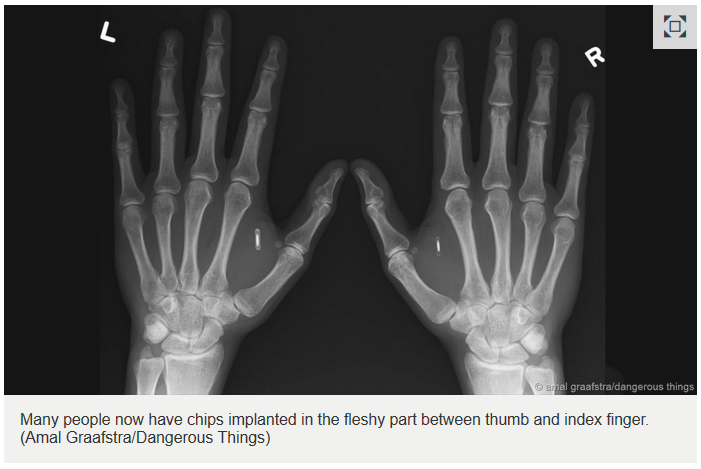 Image and above caption from BBC.com’s “Why I Want a Microchip Implant“

Are you able to deal with the hard political and technical realities of the Third Millennium, B.C.?

Here is a test, to help you answer that question.

Here, Stone speaks of what he’s read and been told about plans for using Obamacare’s federalized health care control for the purpose of implaning chips in America’s entire population. He, as many quickly would, compares this to the Bible’s prophecy of “the mark of the beast.” Mr. Stone speaks with the inflections of the rural South. Many in America suffer from the bigotry of thinking a man of such persona to be ignorant. But just who is ignoring the facts?

This is the test:

Whether he has all the details down or not, do you believe Perry Stone is properly concerned, here?

If not, regrettably, you fail.

Stone refers to the year 2017. I have written before of the potential for the powers that be to orchestrate breakdown, upheaval, and chaos in America — possibly during the administration of the next Republican president. It would fit the old Marxian method much better to revolt against a Republican rather than a Democrat, since the latter has effectively become America’s neo-Marxist Party. A new president is to be inaugurated January, 2017.

Do you think the minor economic collapses in 2008 may have been orchestrated, at least in part, in conjunction with that year’s pivotal elections, but on a smaller scale than would be necessary to provide matches and tinder for complete revolution?

If you answered “No” to either question, we have more for you to read and to hear, for your frankly, remedial, education.

The existential threats to the United States of America hardly include that too many citizens are sorting through and discussing these all too valid concerns, about such increasingly available methods for corrupt power to become corrupt absolutely. The threats do include that not nearly enough otherwise sensible Americans are.