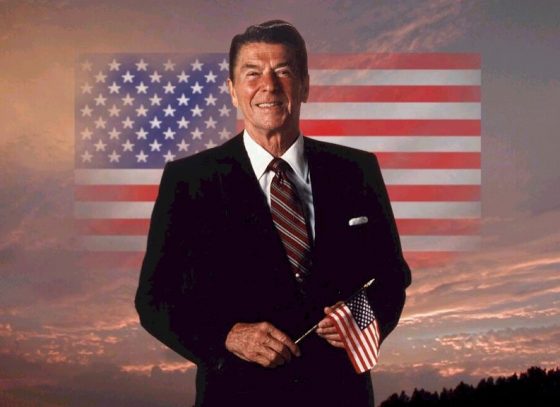 I have just recently watched Ronald Reagan’s 1964 speech: “A Time For Choosing” again. It strikes me that exactly what he was putting forth in that speech is as relevant today as it was then. Perhaps even more so. A copy of the full transcript will follow the video at the end of this post, so you can see and hear for yourself the Great Communicator and what he had to say all those years ago. The speech was given during the Barry Goldwater campaign and in effect, launched Ronald Reagan’s political career. His prescient words never cease to affect and move me.

As Reagan pointed out then, the issues confronting us now cross party lines. We no longer are seeing two separate distinct parties. We see Progressives on both sides working towards a political agenda that is Marxist in nature and two potential candidates that once the makeup and reality TV personas are removed, are strikingly similar. Now as then, the Democrats are pushing the ‘peace and prosperity’ line and that we have never had it so good. In fact, Obama has been saying that now for weeks, despite the reality that Americans are living and seeing with their own eyes.

Today, we see an actual unemployment rate north of 30%. That’s not the propagandic lie the masses are told… the laughably low number of 4.7% is sheer horrific revisionism. These are numbers not seen since the Great Depression. Bread lines are hidden using EBT cards… joblessness is white washed with benefits and massaged statistics… debt is simply ignored. Under Obama, we now owe well over $19 Trillion in debt and that doesn’t even begin to cover the unfunded liabilities hanging out there. A nation, even the strongest in the world, cannot long exist under such debt. I also believe our gold vaults are empty. And it is only a matter of time now until the dollar is absolutely worthless on the world market. Our enemies are sure to come calling at that point in time.

As for peace, there is no peace at hand. Thanks to the Progressive policies implemented before and after 9-11, we now live in a new world that is far more dangerous than it ever was before, where Islamic terrorists are running rampant across the planet. We are also actively funding our biggest enemies and the largest purveyors of terrorism on the planet… the Iranians. Obama has granted nuclear weapons to insane theocratic mass murderers and that will not end well.

END_OF_DOCUMENT_TOKEN_TO_BE_REPLACED 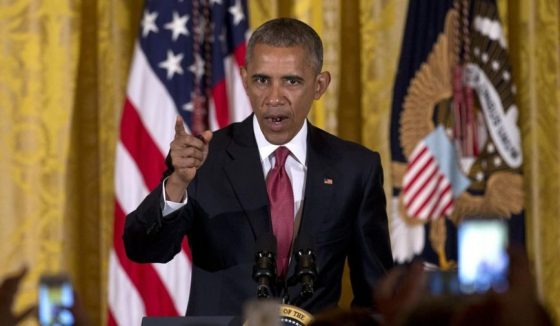 The Obama administration continues to aid illegal immigrants after they cross the border, allowing them to take up residence throughout the states under the pretense that these persons ultimately await a deportation hearing in the offing. And despite promises that the Obama administration’s immigration apparatus would focus on the criminal element, this administration is also failing to deport criminal aliens when they are released from U.S. jails.

The administration’s current refusal to enforce the law resembles amnesty for all, much like the amnesty proposed by Democratic presidential candidate Hillary Clinton. Yet the liberal media deliberately fail, time and again, to report the truth about how many illegal aliens are entering the U.S. Actually, they fail to report on illegal immigration at all—unless it is in the context of undermining Republican presidential candidate Donald Trump or praising Mrs. Clinton.

For example, Bloomberg’s Alan Bjerga reports that Trump is leading an “immigration backlash” that is hurting farmers and causing crops to “rot.”

Bjerga quotes a farmer, a son of Mexican immigrants, as saying, “The rhetoric that’s getting preached is pushing xenophobia…You can’t call an immigrant a murderer. You can’t paint them with that brush.”

We have long reported that mainstream media pundits prefer to describe the immigration debate in terms of illegal immigrants’ humanity, evoking sympathy for the downtrodden. However, the Obama administration continues to fail to deport dangerous criminals.

As we have reported, Government Accountability Office data shows that approximately 250,000 illegal aliens in the United States committed nearly three million crimes. “Roughly 50 percent were arrested at least once for either assault, homicide, robbery, sex crimes or kidnapping,” wrote James Simpson for AIM.

Mrs. Clinton has committed to not deport illegal immigrant children from the United States, nor would she deport any illegal immigrant without a criminal record. “That’s what, that’s what I’m telling you,” she said in March. “I do not want to see them deported. I want to see them on a path to citizenship. That is exactly what I will do.” The message she’s sending is, if you can make it across our porous Southern border, we won’t send you back.

“Clinton was one-upping the Obama administration’s policy of letting illegal immigrants who claim to be ‘children’ and their parents remain in the United States indefinitely,”writes Michael Barone for RealClearPolitics on June 7. “In effect she is calling for open borders, something that goes even beyond Barack Obama’s executive action, which has been ruled illegal by a Texas federal judge and appeals court.”

This, ultimately, is a false dilemma. Open borders are almost here. After all, the Obama administration is not deporting some of those who have committed crimes, and it is busy busing illegal aliens without paperwork. Judicial Watch reports that Border Patrol sources have told it that “The Department of Homeland Security (DHS) is quietly transporting illegal immigrants from the Mexican border to Phoenix and releasing them without proper processing or issuing court appearance documents…”

“They’re telling us to put them [the illegal immigrants] on a bus and let them go,” a law enforcement official recently told Judicial Watch. The non-profit watchdog organization reports that “Outraged Border Patrol agents and supervisors on the front lines say illegal immigrants are being released in droves because there’s no room to keep them in detention.”

The administration’s failure to deal with the criminal aspect of illegal immigration also threatens the safety of average Americans throughout the country. Rep. Brian Babin (R-TX) told Adam Kredo of The Washington Free Beacon that “the administration is trying to suppress information about the release of some 86,000 criminal illegal immigrants who have committed 231,000 crimes in just the past two and a half years.” The administration is not deporting these criminals after they are released from U.S. prisons, reports Kredo.

These lax border policies come as the Obama administration has even more money to spend combatting illegal immigration than ever before. According to Kredo, Immigration and Customs Enforcement deported 410,000 aliens in 2012 on a budget of $2.8 billion. With $3.5 billion in funds, ICE deported nearly half as many illegal aliens—just over 235,000 aliens in 2015.

Breitbart’s Katie McHugh outlines some of the human cost exacted by criminal illegal aliens during the Obama administration:

This is all occurring in conjunction with two other matters that are both lawless and very disturbing. One is the effort by the administration to enable non-citizens to vote in this year’s presidential election. The other is the absolute lying to and defiance of a federal judge’s orders to stop processing DACA (Deferred Action for Childhood Arrivals) applications, pursuant to a lawsuit brought by 26 states against the Obama administration’s executive actions. The federal judge, Andrew S. Hanen, initially required as part of his ruling that Department of Justice lawyers receive ethical training, but now has ruled that the department has “a chance to suggest its own punishment for having repeatedly misled the federal court,” according to The Washington Times.

In the meantime illegal immigrants may be taking advantage of Obama’s lax, pro-family immigration policies by kidnapping children to bring along with them across the border, Deputy Assistant Attorney General Leon Fresco recently said. By appearing as families these illegal immigrants hope to receive a free pass into the continental U.S. Neither Fresco, ICE, nor Customs and Border Protection would answer The Washington Times’ questions about this matter.

As the Obama administration pursues an open borders policy the mainstream media continue to look the other way no matter how many Americans are at risk. Or, like Univision’s Jorge Ramos, pundits push for the candidates to agree to lax immigration policies that harm America’s future.