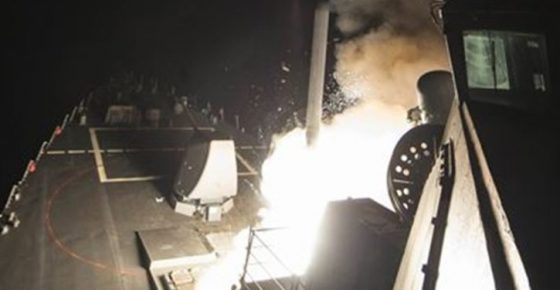 In the early morning hours of 7 April in Syria – between 8 and 10 PM Eastern on 6 April, in the U.S. – two U.S. Navy Aegis destroyers began launching Tomahawk cruise missiles at an air base in Syria just east of the city of Homs.  In total, the ships launched at least 59 cruise missiles.  All were reportedly directed at the single air base, indicating the attack was meant to take the facility out of operation.

President Donald Trump, in a recorded address (video below), explained that USS Ross (DDG-71) and USS Porter (DDG-78) were striking the air base in Syria from which the chemical weapons attack that inflicted ghastly damage on civilians in Idlib Province was launched on Tuesday.

The target, according to the latest reporting, was Shayrat Air Base, located about 15 miles southeast of Homs.  Fox News’s Jennifer Griffin indicated in the 10 PM hour that the Pentagon would be providing a track of the Syrian Su-24 Fencer – a tactical bomber – that it says conducted the chemical weapons attack on 4 April.  In other words, the U.S. military has direct evidence that the attacking aircraft was a Syrian bomber jet.  (This is not only feasible, it’s probable and routine.)

Shayrat Air Base was never one of Assad’s biggest, most developed bases.  It is overshadowed by T4 air base (often referred to as Tiyas Air Base) further east, which has been the front line of the fight against ISIS for some months now. 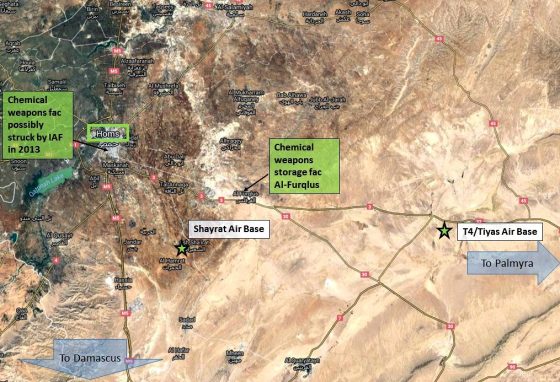 But Shayrat has seen a lot of use for combat logistics in the last 18 months.  The Russians persistently denied it, but there have been numerous reports that they made improvements to Shayrat in 2015 in order to use it as a base.  And Arabic and social media have recorded Russian helicopters making use of Shayrat as an interim base for logistics stops, including mission refueling.  (Fox reports that the U.S. military used its hotline with Russian forces to give them warning of the attack.)

Some reporting has indicated that the Iranians have delivered weapons and materiel there too, and that “Iranian squadrons” were to operate from the base once it was improved by the Russians.  (The Iranian presence in T4/Tiyas has been better documented.)

Shayrat also was long a base for the IRGC and Hezbollah. Iranian officers were reported at the airport as recently as last month.

The Russians’ use of the base means, at a minimum, that the U.S. has put Russia as well as the Assad regime on notice that there will be no tolerance for chemical weapons attacks. 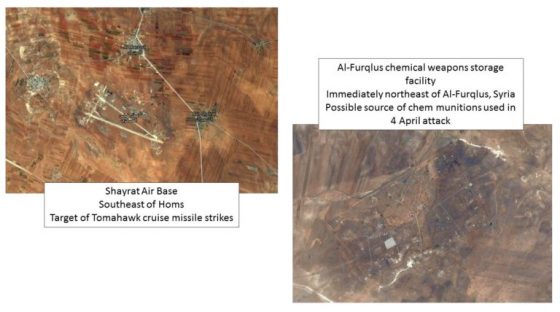 Shayrat’s use for launching a chemical weapons attack makes sense, given its proximity to the Al-Furqlus storage facility for Assad’s chemical weapons, which is located about 11 miles north-northwest of Shayrat Air Base, just east of Homs.  Shayrat itself stored chemical weapons prior to 2011, and given its regular operational use, probably has chemical weapons prepared for deployment located next to the taxiways on occasion.  It is not thought to be a main storage site now, however.

Notably, the Israeli Air Force is long thought to have attacked another chemical weapons facility in south Homs, closer to the city center, in 2013.

And the IAF reportedly attacked a Syrian air base between Homs and Palmyra the night of 16-17 March, when the Syrian regime launched anti-air missiles at the IAF strike-fighters.  The base in question was thought to be T4, and the reason for the attack: an Iranian delivery of special weapons intended for Hezbollah.

The U.S. engagement in Syria – which ramped up last month with the deployment of Marines to Raqqa – has thus clearly entered a new phase.  Since 2014, our air activities in Syria have been limited to attacking emergent ISIS targets, almost all in northern Syria.  U.S. forces have been kept out of the fight in western Syria, where Russia and Iran have ruled the roost.

Now, however, we have struck into the heart of Assad’s center of gravity: the part of Syria where he maintains his operational strength and hosts the principal regional outpost of Iran.  The corridor from Damascus to Homs is Assad’s core.  Iran has made use of it as a line of communication with Hezbollah and Hamas for decades.

At the moment, we have no preview of any further military intentions for U.S. forces in this part of Syria.  The U.S. reportedly intends to reenergize the Geneva talks on Syria and negotiate to get Assad removed from power – something it would have been preferable to do in 2011, if we had had an administration with the vision and competence for it.  It’s not clear how feasible it will be in 2017.

The backlash from tonight’s work hasn’t been previewed yet either.  I don’t fear for regional “stability,” which isn’t likely to change much merely from the cruise missile attack.  But within a couple of weeks, the overall conditions for negotiation will have changed, because of the scramble set off by the U.S. action.  It will be interesting to see how Trump’s team takes the challenge on.

It can’t do worse than Obama’s.  My sense at the moment is that Trump – if he wants to – can quickly assume the “catbird seat” that Putin has been angling to occupy in settling the future of Syria.  Most of the various players – Turkey, the Arabs (the Saudis, Jordan, Egypt), Iraq – would be enthusiastic about having a strong America to act as a great-power broker.  Russia can live with it, if Trump accepts that Russia has legitimate interests in Syria.  I think Trump would do that.

The wild card will be Iran.  But I’d expect Iran to try to lie low for now in Syria, and avoid losing too much rather than try to keep it all by keeping Assad in power, through some confrontational means.  Iran has fingers in a lot of pies now, and usually takes the long view.  Unless Trump starts striking targets in Lebanon, Iran is probably prepared to let even Assad go, if that’s what it takes to keep the U.S. out of deeper political and military involvement in Syria.

The ball is very much in Trump’s court now.  For my money, he needs, at the moment, to keep a rally going.  The conditions aren’t right yet for a decisive point against anyone – other than perhaps Assad.

USS Porter goes through her paces in this video from DOD.  Stick with it for the best smoke plumes.