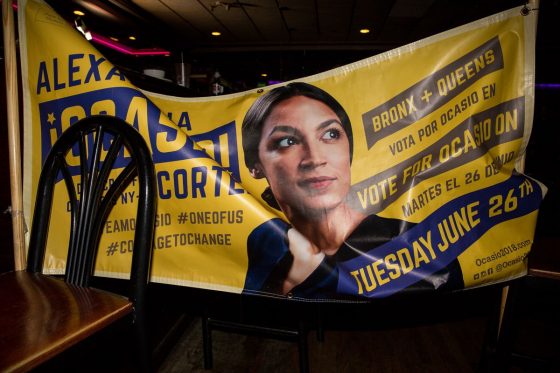 I consider DSAer Alexandria Ocasio-Cortez of New York to be extremely dangerous to the freedoms of this country. Democratic Socialists of America have seen a number of wins this year by getting members elected to office, but hers will be the biggest win so far and it foreshadows a new wave of young, millennial communist Democrats who will follow in her wake across the nation. Membership for DSA is exploding across the nation suddenly as millennials rush to imitate their new idol. Clueless, useful idiots on the run. She’s a Bernie Sanders acolyte and young voters are flocking to her.

She ran on a platform that promises the abolishment of ICE and the nationalization of healthcare using a single-payer system. She promises to impeach President Trump as well. Other planks include Medicare for all, a universal jobs guarantee, no tuition for education at schools or universities, paid family and sick leave, housing as a human right, ending the war on drugs, demilitarization of the police, doing away with prisons, open borders and decriminalization for illegal aliens, an infrastructure overhaul using green energy, ending corporate donations in politics and a peaceful economy (by force if necessary). She beat Crowley, the fourth-ranking Democrat in the House, by 15 points in a New York City district that covers the Bronx and part of Queens. It was a massive shock to not only the nation, but the Democrats themselves. Wake up and smell the communism guys.

If you don’t already read Far Left Watch, you should. They research and report on radical leftists here in the U.S. and they do a terrific job of it. DSA made headlines when their leadership from their Iowa State campus chapter encouraged people to shoot President Trump and when leadership from their University of Georgia Chapter called for the execution of house GOP members. Did you ever hear about that in the media? Nope. Now, a number of DSA leaders are endorsing communism out in the open as well. Far Left Watch puts it succinctly, it is “an ideology responsible or the oppression, incarceration, and murder of tens of millions of people.”

This is the original tweet from Olivia Katbi Smith, who is the co-Chair of the Portland DSA chapter – I find it eye-opening:

That’s the mask coming off once and for all. It’s the truth behind the matter in stark relief. Others followed suit.

The Charlottesville DSA co-chair had this to say:

From the Hudson County DSA co-chair:

As a DSA branch co-chair, I would like to sign onto this with a small amendment: Communism is very good. https://t.co/We1AUMZYTZ

The Queens DSA chapter didn’t want to be left out either – that’s Ocasio-Cortez’s stomping grounds:

The media has been slobbering all over Alexandria Ocasio-Cortez since her win and they just adore “democratic socialism.” Of course, Alexandria never actually defines on air what the difference between “democratic socialism” and “socialism” is… not because she doesn’t know, but because there is none. Democratic Socialists of America, who she represents, never seems to become a topic of inquiry though. Neither does the fact that they endorse using their violent authoritarian ideology against their opponents. The same consideration is never afforded the right.

Ocasio-Cortez is not pure as the driven red snow either. One commenter on my blog had this to say about her, “She’s clueless….mentions Celia Cruz during Black History Month! Celia Cruz left Cuba because of the very ideas that she is espousing. Celia was denied the right to return to Cuba by that communist regime to attend either of her parents funerals. It tore her apart. Now comes this misinformed millennial and posts idiotic comments like this. Makes my Cuban blood boil.” Right there with ya BC.

She also tries to paint herself as part of the working class even though she grew up in an affluent New York neighborhood. She did work as a bartender while running for office and her coworkers had very unflattering things to say about her. They called Alexandria greedy and, in at least one instance, allegedly kept most of the tips for herself. But she’s pretty, young and has propaganda down to an art, not only on social media, but with banners and pins. She reminds me of old-world communism. Evidently, it’s making a horrid comeback.

Not all of Occasio-Cortez’s fellow Marxists share her exuberance for taking socialism nationwide either. Democratic senator, Illinois’ Tammy Duckworth, says not so fast. “I think it’s the future of the party in the Bronx, where she is,” Duckworth said on CNN’s State of the Union, over the weekend. “I think that you can’t win the White House without the Midwest, and I don’t think you can go too far to the left and still win the Midwest.” Duckworth added that where she’s from the message has to be directed to “the industrial Midwest.” She’s right – that dog won’t hunt there.

Alexandria is far from giving up on it though. “With respect to the Senator, strong, clear advocacy for working class Americans isn’t just for the Bronx,” Ocasio-Cortez tweeted, listing Sanders’s primary wins in Michigan, Minnesota, Kansas, Nebraska, Wisconsin and Indiana. “We then lost several of those states in the general. What’s the plan to prevent a repeat?” she asked. The media is saying that Tammy Duckworth should embrace “socialism with Midwestern characteristics.”

With respect to the Senator, strong, clear advocacy for working class Americans isn’t just for the Bronx.

We then lost several of those states in the general. What’s the plan to prevent a repeat? https://t.co/99K08qr7SH

The Democratic Party is lurching to the extreme left. They are brazenly becoming communist, not only in ideology, but in their tendency towards violence and suppression of freedom and rights as well. Ocasio-Cortez is not a one-off. She’s a trend and a dangerous one. And DSA, CPUSA and the Democrats are embracing all of it.