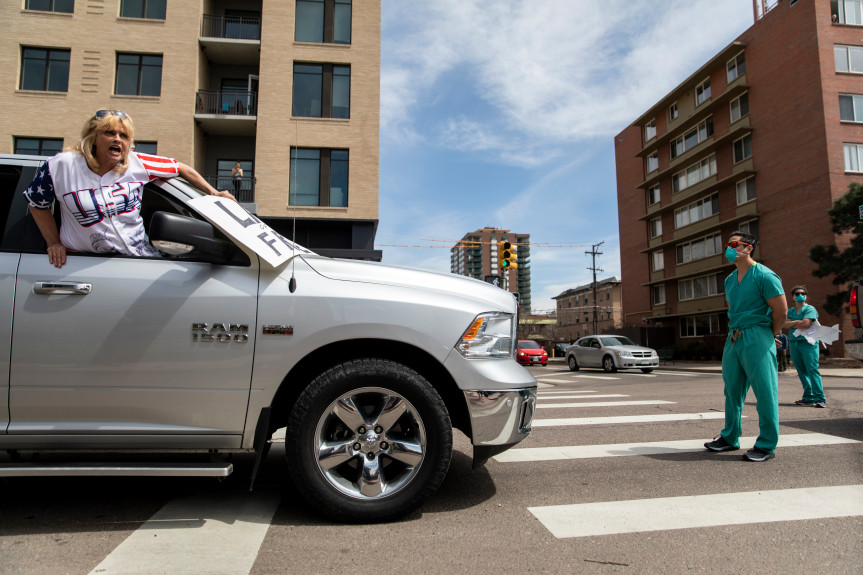 Two people who identified themselves as healthcare workers at an area hospital stand in the crosswalk at 12th and Grant streets in Denver on Sunday, April 19, 2020, counter-protesting hundreds of people who gathered at the state Capitol to demand an end to Colorado’s stay-at-home order.

This will not end well if things don’t change and fast. And I don’t need to tell anyone that this is just plain nuts. People are being told in Washington they can’t fish, many states say you can’t gather in groups of more than ten, you can’t buy seeds to plant, church attendance is forbidden even in your car, governors are deeming certain businesses as essential and others that aren’t in an incoherent fashion, and whole state economies have been destroyed over COVID-19 which has fewer deaths than we see by the normal flu every year. That’s suicidally insane on a national level. Not to mention fascist – a number of these states are now using Chinese-made drones to enforce social distancing as well – 22 to be exact.

Americans aren’t going to stand for this much longer. The rage out there against mostly liberal governors is palpable. In my state of Nevada, thousands showed up in Las Vegas to protest this weekend and hundreds more were in Carson City. They collectively gave the middle finger to Governor Sisolak a Democrat. The mayor of Las Vegas, an Independent, called Sisolak’s handling of the crisis insane. There have been bigger protests in Michigan, Pennsylvania, Ohio, Kentucky, Minnesota, Texas, Indiana, North Carolina, Utah, Arizona, Colorado, Vermont and Washington and more are set to come this week. A protest occurred today in western New York.

Americans were already going to re-elect Trump in a landslide because the best the left could offer was a senile Joe Biden. They have only made Trump’s re-election stronger and more certain here while guaranteeing that a bunch of leftist governors and mayors get the boot next time around for their fascist tendencies.

“Freedom over fear,” said one protester’s sign in Indiana. “Freedom is essential,” said another in Texas. “Shutdown the shutdown,” said a third in Maryland.

Thousands of angry residents surrounded the Michigan state capitol in Lansing last week, staying in their cars to adhere to the governor’s orders but blaring their horns as they shut down the city. The same things happened over the weekend at the Maryland capitol building in Annapolis, where the group Reopen Maryland says the shutdown has crushed small business.

At the capitol in Austin, Texas, protesters chanted “Let us work!” More than a million people have filed for unemployment in Texas since the coronavirus crisis began.

So far, the protests have been peaceful. But as things worsen, that may change. More than 22 million people have filed for unemployment benefits in the past four weeks, and the real numbers are likely far higher. The number of new jobless claims have been jumping by more than 5 million per week, which means if governors keep their states shut down until mid-June and the jobless rate remains the same, another 40 million people could be out of work.

That’s a lot of damage for a virus that, for most people, causes mild or moderate symptoms, a fever, and a cough that both go away in two to three weeks. In addition, the head of the U.S. Centers for Disease Control and Prevention (CDC) says 25% of infected people might not have symptoms, but other experts say that 50% or more never get any symptoms. That means the virus is likely far more widespread than known, and many Americans may have already had it and didn’t know.

Trump has put forth a three-phase plan to reopen the economy which calls on the governors to move forward quickly. He’s putting the decision back in the governors’ laps which is brilliant. It puts their full disdain for the Constitution and the American people front and center. Among the guidelines for Trump’s “Opening Up America Again,” states are told they should not reopen until confirmed cases have gone down over a 14-day period. That means many states wouldn’t open until next month at the earliest. Personally, I don’t agree with that. I feel this has been way overblown and we should have opened yesterday.

The people are really ticked at these governors. At a protest in Minnesota, resort owner Bob Barton told Breitbart News, “I’m here because unless the governor lifts the stay-at-home order, in another 30 days, I’m out of business. I lose my home because we have a three-month season in which we make our living. … Me and hundreds of other resorts will go out of business this year.” That’s already happening here in Nevada. Sisolak shut down the casinos, hotels, and restaurants. Our economy has been devastated and Nevadans are on the verge of revolt here. Even the police in Vegas are belong laid off – so far, 154 of them are now unemployed.

And the fascism is getting worse by the day. Per The Daily Wire, in New Jersey, a woman was charged Friday with violating the emergency stay-at-home order for organizing a protest in Trenton. In North Carolina, the Raleigh Police Department arrested a person for violating the state’s stay-at-home orders, saying, “Protesting is a non-essential activity,” even though the First Amendment guarantees “the right of the people to peaceably to assemble.” 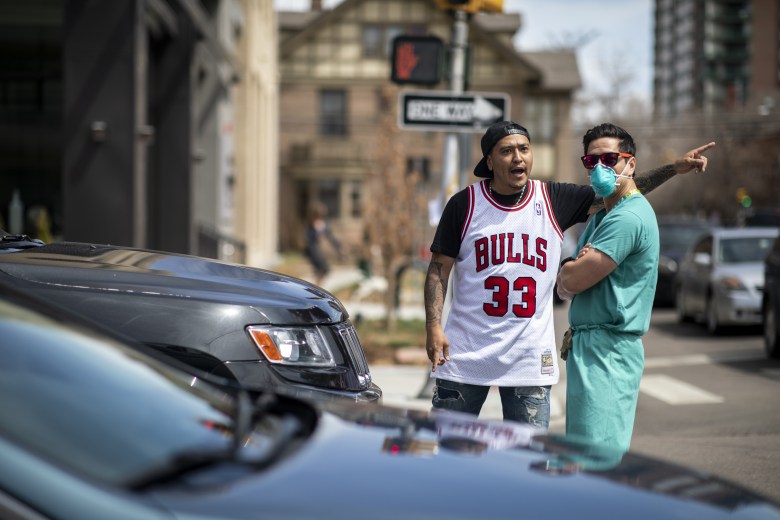 A couple of people dressed up as healthcare workers in Colorado and blocked protesters. They would not identify themselves and it’s questionable that they were who they said they were.

Video of the confrontation shared on Twitter shows a woman holding a sign with the words “Land of the Free” yelling at one of the healthcare workers silently blocking her truck from passing.

Two nurses, who have witnessed first hand the toll Covid is taking in Colorado, stood up and peacefully counter protested. Here is how they were treated. I had join them. pic.twitter.com/iJnNcqZxSv

Texas, Vermont, and Ohio are among those who are taking steps toward a gradual opening as President Trump pushes to reboot the economy and reopen by May 1st. Several states announced plans to coordinate their response with neighbors including California, Washington, and Oregon; and New York, New Jersey, Connecticut, Delaware, and Rhode Island.

While socialist Joy Behar of The View calls protesters terrorists, they are anything but that. These are people who want to go back to work and feed their families. Note to the harpies at The View, keeping people at home that are sick is called a quarantine… keeping healthy, productive people at home under threat of fines and imprisonment is called tyranny. 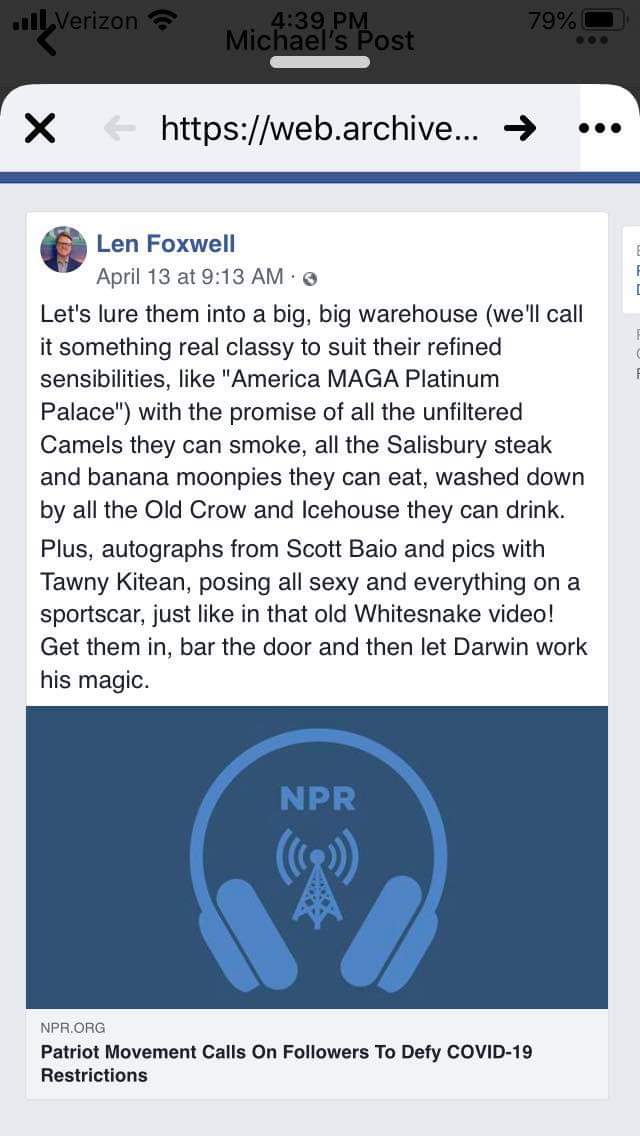 One last example… Len Foxwell — chief of staff for Maryland Comptroller Peter Franchot — last Monday on Facebook shared a link to an article about a group called “The Patriot Movement,” which called on people to defy coronavirus-related stay-at-home orders WJZ-TV reported. The station said Foxwell wrote the following on his post, which has since been taken down:

Let’s lure them into a big, big warehouse (we’ll call it something real classy to suit their refined sensibilities, like “America MAGA Platinum Palace”) with the promise of all the unfiltered Camels they can smoke, all the Salisbury steak and banana moonpies they can eat, washed down by all the Old Crow and Icehouse they can drink.

Plus, autographs from Scott Baio and pics with Tawny Kitean [sic], posing all sexy and everything on a sportscar, just like in that old Whitesnake video! Get them in, bar the door, and then let Darwin work his magic.

Nice huh? That shows utter contempt for most of America, for the President and for his supporters. Franchot is standing by this guy even after this as well. COVID-19 has done one thing really well in this country… it has exposed the left for the tyrants they really are. There will be a price to pay for it in more ways than one.