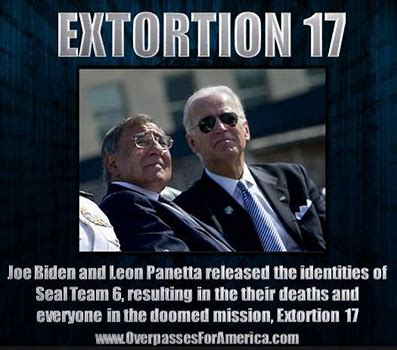 Former Benghazi liar and U.N. Ambassador Susan Rice has seemingly risen to the top of Joe Biden’s VP list which would make a unique pairing of someone who can’t tell the truth and someone who can’t remember the truth. Thie pick will no doubt be finalized after “Bunker Biden” sniffs the hair of the potential picks.

One of the chief unmaskers of Trump officials caught up in deep state surveillance of the 2016 Trump campaign and an architect of the attempted coup against Trump, Rice recently lied again by pushing the false claim that Trump ignored reports of Russian bounties for the killing of U.S. troops in Afghanistan and was doing Putin’s bidding by callously letting American soldiers get killed. As reported by Axios:

“And now we learn that even when it comes to the blood of American service members, this president picks Putin over our troops.”

This was, as Trump says, fake news, The Russians have little money to throw around and the Taliban is trying to kill our troops anyway, for free… troops Trump is bringing home. Yet the woman who went on five talk shows to spread the lie that an Internet video got four Americans killed, including a U.S. Ambassador, at a Benghazi compound that Obama/Biden/Rice left unprotected and refused to send help to, has the chutzpah to express concern about the safety of U.S. troops in Afghanistan.

Of course, she has said she wants to see Joe Biden elected and would willingly be his VP. She would be Biden’s Rasputin, pulling his strings, completing the fundamental transformation of America begun by Barack Hussein Obama. So she ignores Biden’s culpability for Benghazi, as she ignores her own, and ignores Biden’s key role in getting Navy Seal Team 6, the unit that killed Bin Laden, slaughtered in a revenge ambush in Afghanistan.

Biden is not above exploiting the sacrifice of our young men and women who put themselve3s in harm’s way on our behalf. He’s done it before and has gotten them killed in the process. Biden should not be trusted with the nation’s security or the lives of its heroes.

Yet while critics of President Trump’s foreign policy accuse him of a degree of recklessness and immaturity that place the nation’s security at risk, Biden’s service in an administration that gave us the criminal negligence and incompetence of Benghazi provides us with an example of why he should not be trusted with the nation’s security or the lives of its heroes. That example is the tragedy of an operation known as Extortion 17. 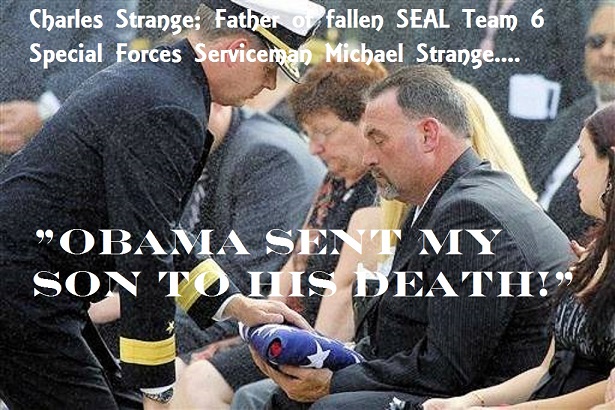 As author and attorney David Shestoksas points out in his review of  Betrayed: The Shocking True Story of Extortion 17 as told by a Navy SEAL’s Father, Biden betrayed the heroes that killed Ben Laden to further his political ambitions:

The elder Vaughn asked:  “Got who, son?”

On television shortly thereafter, President Obama declared to the nation that Osama Bin Laden, the mastermind of the deadly attacks of September 11, 2001, was dead.

“Admiral James Stavridis … can tell you more about … the incredible, the phenomenal, the just almost unbelievable capacity of his Navy SEALs and what they did last Sunday… I’d be remiss also if I didn’t say an extra word about the incredible events, extraordinary events of this past Sunday.  As Vice President of the United States, as an American, I was in absolute awe of the capacity and dedication of the entire team, both the intelligence community, the CIA, the SEALs.” (emphasis added)

Less than a day after Biden’s remarks Aaron Vaughn called his mother Karen:

“There’s chatter and all of our lives are in danger including yours, Mom.”

On August 6, 2011, in the Tangi River Valley of Afghanistan, Aaron Vaughn and 30 other Americans,[3] including 15 members of SEAL Team VI[4] were killed when their fifty-year-old helicopter, designated Extortion 17, was hit by a rocket-propelled grenade.

Leon Panetta is one who has taken President Trump to task for his alleged “loose lips.” Panetta himself, it would seem, was also one who needed to be surrounded by adults to keep his loose lips in check, having put the lives of those who took out Osama bin Laden at risk. As Breitbart reported:

Panetta should know because it was his loose talk after the Osama bin Laden raid that exposed a Pakistani doctor, Shakil Afridi, who helped locate the Al Qaeda leader.  As a result, Afridi was imprisoned on fabricated charges and will live under the fear of assassination for the rest of his life.

As Breitbart News noted in 2013, a Pakistani report on Dr. Afridi reportedly concluded “Dr. Afridi was implicated by a ‘statement by the U.S. Defense Secretary Leon Panetta, who was the CIA Director when May 2 happened, confirming the role of Dr. Afridi in making the U.S. assassination mission a success.’”

Panetta did not reveal that critical intelligence in a private meeting with a foreign emissary, but to the entire world, on CBS News’ 60 Minutes. 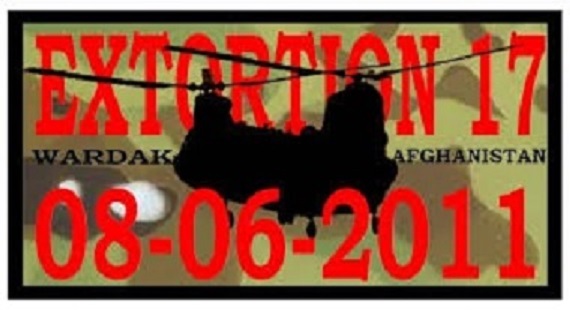 Then there is Joe Biden, whose loose lips got members of SEAL Team 6 targeted for revenge and killed in an Afghan mission known as Extortion 17: As Investor’s Business Daily recounted on May 28, 2013:

The shoot-down was described at the time as a “lucky shot,” but the families of the dead SEALs believe that, like Benghazi, it was a pre-planned operation of revenge facilitated by a government that put them in harm’s way without adequate support and with a bulls-eye painted on their backs. 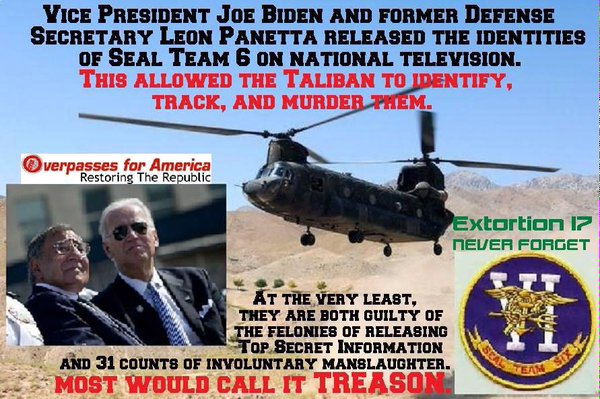 Biden skated on the leak that got SEAL Team 6 targeted for revenge. Panetta and Biden, like Hillary Clinton on Benghazi, put lives in jeopardy and got men killed.

The deaths of more than 20 Navy SEALs from the unit that took out Osama bin Laden is connected to a loose-lipped Vice President who likes to sometimes pose as a presidential action figure.

To be a politician takes more chutzpah than courage. The chattering class, as the mainstream media is sometimes called, was more worried about how the successful Bin Laden raid by Navy SEALs might affect President Obama’s reelection chances in 2012. So did administration officials, as the leaks and chest-thumping began almost immediately.

SEAL missions depend on bravery, courage, skill, daring – and secrecy. Initially, when President Barack Obama announced that “a small team of Americans” had killed Osama bin Laden, he did not identify it was the SEALs.

On May 3, at an event in Washington, Vice President Joseph R. Biden Jr. did the unthinkable: He publicly revealed the identity of the special-operations unit responsible for bin Laden’s killing. His reckless action put at risk the lives of every member of SEAL Team 6. The Taliban and other jihadists eager to avenge bin Laden now knew which unit to target. Stunned and shocked, SEAL members immediately realized they were going to be hunted by al Qaeda sympathizers.

Karen Vaughn, the mother of slain SEAL Aaron Vaughn, says that within hours after Mr. Biden’s comments, her son called to tell her to wipe away every piece of information regarding the family on social media, Facebook and Twitter. “I never heard Aaron that afraid in his life,” Mrs. Vaughn said in an interview. “He told me: ‘Mom, we’re picking up chatter. We’re not safe. You’re not safe. Delete everything.’”

According to Mrs. Vaughn, Mr. Biden essentially placed a bulls-eye on her son’s back — and that of all the other SEALs. He leaked classified information. SEAL Team 6 is a covert unit, which is supposed to operate in the shadows. This is how they are able to conduct deadly raids on terrorist groups. Their reward, however, for killing the world’s foremost terrorist mastermind was to be outed by their own government.

In a damning video speech, Charles Strange, the father of Navy SEAL Michael Strange, also lays the ambush of Extortion 17 right at the feet of Joe Biden.

The RPG that felled the SEALs could have just been a random act of war. The Taliban could have just gotten lucky. Or they could have been plotting and waiting for revenge, looking for helicopters that might be carrying more SEALs on another mission, a big bulls-eye painted on their backs by a Vice President who forgo that loose lips can sink ships, and they can also get Navy SEALs killed.

* Daniel John Sobieski is a freelance writer whose pieces have appeared in Investor’s Business Daily, Human Events, Reason Magazine, and the Chicago Sun-Times among other publications.