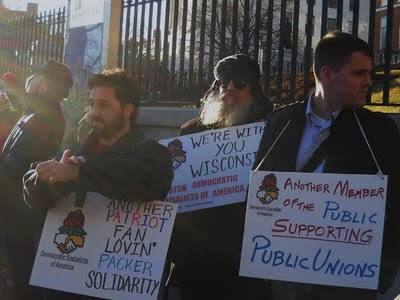 In Boston on Tuesday 22 February, DSAers joined over a thousand union members and supporters demonstrating outside the statehouse in solidarity with Wisconsin workers.

Wisconsin has been in the forefront of our minds, as tens of thousands of people have poured into the streets to resist the Republican governor’s attempt to effectively eliminate all collective bargaining rights for public employees.

The energetic and enthusiastic Boston rally was attended by a healthy mixture of public and private sector union members. DSA members who were not part of a union contingent joined the hundreds of community supporters. We had made a baker’s dozen of signs with slogans like “Another Patriot Fan Lovin’ Packer Solidarity,” “Madison to Cairo: Workers United!” and “Union Yes! Walker No!” Each sign had a DSA logo and a printed sticker saying Boston DSA. We handed out several hundred fliers with DSA logos about the Campaign for our Communities, and publicizing an upcoming Boston speakout on the impact of budget cuts.

The spirited rally was addressed by speakers representing many unions, followed by Massachusetts Governor Deval Patrick and at least two members of Congress. Rep. Mike Capuano advised the assembled union members that: “Every once in a while you need to get out in the streets and get a little bloody when necessary. I am proud to be with people who understand that it’s more than sending an e-mail that gets you going.” Although Capuano later had to apologize for the “bloody” comment, the assembled crowd met the substance of his remarks with cheers, whistles and applause. If Democrats are telling us that elected officials need that kind of pressure from the streets, you better believe we gotta do it.

Anyway, overall a good day for DSA and a great day for labor.