Let’s make treason, espionage and subversion even easier, shall we? 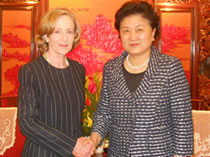 The announcement was made during the second meeting of the China-U.S. high-level consultation on people-to-people exchange held in Washington.

The new scholarships are made in addition to the pledge by the Chinese government last year of 10,000 “Bridge Scholarships” for American students to study in China.

Realizing the strategic importance of the U.S.-China relationship, the U.S. government has called for more Americans to study in China.

In November 2009, during his visit to China, U.S. President Barack Obama announced the “100,000 Strong” initiative, a national effort designed to increase dramatically the number of American students studying in China.

How many of these people will be recruited, or blackmailed into becoming spies or “agents of influence?”

How can the FBI possibly keep track of so many potential traitors?

During a speech at the Massachusetts Institute of Technology, Liu, who is also a member of the Political Bureau of the Communist Party of China Central Committee, also highlighted the importance China attaches to its relations with the U.S., and gave a detailed introduction about China’s 12th Five-Year Plan (2011-2015) for socioeconomic development.

After the speech, she answered questions by MIT teachers and students on topics including the outlook of China-U.S. people-to-people exchanges, the comparison between the two countries’ education systems, and professional ethics for scientists.

Susan Hockfield, president of MIT, said that Liu’s speech provided rich information for the university’s teachers and students to have a “comprehensive understanding of China.”

I’ll bet China would love to have access to all MIT’s groundbreaking research – a process which has already begun.