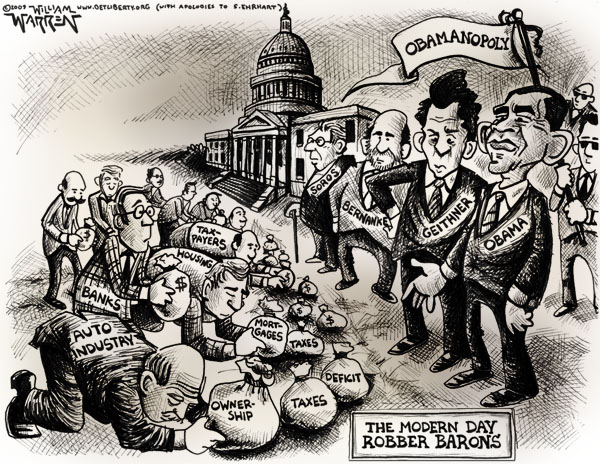 Few realize that the “green movement” is about building large personal fortunes for an elite few. As with all robber barons, it is about the money. It is why President Barack Obama laid out his threat to again bypass Congress and ignore the American people during his 2013 State of the Union address. Mr. Obama will attempt to force his ill-conceived green energy plans into existence with the stroke of his pen via Executive Orders:

“.I will direct my Cabinet to come up with executive actions we can take, now and in the future, to reduce pollution, prepare our communities for the consequences of climate change and speed the transition to more sustainable sources of energy.” – President Barack Obama, February 12, 2013

Obama is determined to resurrect his green energy schemes by drying up America’s access to oil and gas no matter the pain inflicted on American families and businesses. Having put the coal industry on life-support, his next target — restricting power plants that generate electricity to homes and businesses.

What the President hides behind the curtain and does not reveal is his alliance with international green elites, White House and Wall Street cronies and energy regulatory czars who have orchestrated a CO2 carbon-taxing scheme that puts billions of dollars into their own hands. It’s a money scheme. Three years ago, the global-warming money transfer scam surfaced and named not only this president, but a former Democrat president and vice-president as participants planning to accumulate vast personal wealth as a result. One need only ask, why did Al Gore so confidently tout that he was destined to become the “first global-warming billionaire?”

Long in the designing, the elements were close to being in full play. The plans were drawn, the carbon-credit trading exchange registered as the Chicago Climate Exchange was formulated (New York Times – Click here // Trading symbol CCX – Click here.), set to both transfer and stash cash, the green barons’ privately-owned Chicago bank was on the ready and the right president was in office to perpetrate the scam on the American people. That is, until the great global-warming-climate-change fraud stopped the United Nations-supported, elite cadre of well-connected political, banking and Wall Street associates in their tracks. British Freedom quotes The Times of India:

“Billionaire globalists like George Soros fund green groups and seek to promote the globalist ‘climate change’ scam as a way to enrich themselves and infiltrate developing nations in order to financially exploit them and their natural resources for profit.”

The June 2009 Bloomberg article, Sandor Got Obama’s Nod for Chicago-Style Climate Law by Jim Efstathiou Jr., reported that a carbon-capping bill set to be imposed on American businesses was the cornerstone of Obama’s environmental agenda. Bloomberg quotes CCX founder Richard Sandor as saying that the bill “…began way, way to the left with provisions to push U.S. utilities into bankruptcy.” The article further reads: “Sandor launched the Chicago Climate Exchange, or CCX, in 2003 after getting two research grants from the Chicago-based Joyce Foundation. Obama was on the foundation that gave us the grant, Sandor said. We know him well.” CCX reportedly now operates under the auspices of Environmental Financial Products.

When “global-warming-climate-change” was exposed as a blatant fraud, the American people and a Republican House refused to play ball. By doing so, they stymied the global clique of politicians and socialist ideologues who remain ready to bring America to its economic knees for their own financial and ideological gains. Even so, Mr. Obama is making another high-stakes play to push through his green agenda to fully activate the global CCX exchange despite the high cost to even the poorest of Americans.

While Obama is gearing up to invest billions of America’s tax dollars into the green abyss, other countries are backing away. Never mind that China and India refuse to put a dime into the scam. European nations have already experienced a severe hit to their economies and negative blow-back from their citizens. In the face of worldwide data to the contrary, Obama claimed during his State of the Union address that: “…the fact is, the 12 hottest years on record have all come in the last 15.” How an American President can make such an erroneous claim to the American people in the face of existing facts reveals him as sorely misstating or misinformed.

A February 27, 2013 news release by the Global Warming Policy Foundation states that it has highlighted the global warming standstill for many years against fervent denial by climate activists. Its Chairman, Nigel Lawson, states: “…there has been no further recorded global warming at all for at least the past 15 years.” Backing-up Lawson’s findings are reported reversals by such global-warming heavy-weights as the United Nation’s Dr. Rajendra Pachauri, head of the U.N.’s Intergovernmental Panel on Climate Change and NASA’s James Hansen who both reportedly now recognize that global temperatures have not risen for more than a decade.

Europe is facing a green backlash.

“The BBC has backed down over Sir David Attenborough’s widely contested claim that parts of the world have warmed by 3.5C over the last two decades. …The comment was removed from Sunday night’s repeat of the show.” — Harley Dixon, The Daily Telegraph, 11 Feb. 2013

“…long-term consequences of the Energy Bill will be horrible. It’s a recipe for deindustrialization.” — Professor Gordon Hughes, Mail on Sunday, 24 February, 2013

“Today energy policy is framed with only one factor in mind: satisfying the green lobby. It is, to be blunt, mad.” — Stephen Pollard, Daily Express, 20 February 2013

Scientific facts that Mr. Obama and his cronies prefer you not know come from Edmund Contoski, an environmental consultant for more than 40 countries. In Liberty Unbound, Contoski writes: “The overwhelming majority (97%) of carbon dioxide in the Earth’s atmosphere comes from nature, not from man.” Based on scientific data, “Not only are worms contributing to the CO2 in the atmosphere,” Contoski further notes that, “volcanoes, swamps, rice paddies, fallen leaves, and even insects and bacteria alone emit ten times more carbon dioxide than all the factories and automobiles in the world. Even natural wetlands emit more greenhouse gases than all human activities combined.” Nature itself foils the environmentalists as The U.S. Department of Energy admits that once emitted that 98% of all the carbon dioxide emissions are again absorbed by nature. Contosky then queries, “Termites emit ten time more CO2 than humans, should we cap-and-tax them?”

The media neglect the real reason Barack Obama wants your dollars to flow into his green machine that will swallow them up and then divvy them up among an elite group that will reap financial gain as America loses. The scheme is hidden in plain sight. Perhaps a great investigative journalist like Bob Woodward will peel back the layers of this political fraud. After all, he’s already endured one tongue-lashing threat from the White House.

Email a link of this website with the information provided to fellow Americans and to Congress.