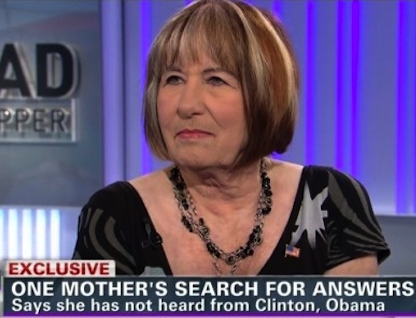 In a shameless glaring act of hypocrisy to rehabilitate Hillary Clinton’s presidential aspirations, the New York Times published an article doubling down on the Obama Administration’s lie that the attack on our consulate in Benghazi was due to an anti-Islam video. http://bit.ly/KjIKlr

Meanwhile, the NYT, Hillary and Obama have displayed a “Pat who” attitude towards Pat Smith, the mother of Sean Smith who was killed in the Benghazi attack on Hillary’s watch as Secretary of State.

What makes the attitudes of these superior, arrogant and pompous liberals so hard to stomach is that they falsely portray themselves as champions of women.

Thus, the Administration stonewalling by refusing to release facts about what led to the death of Pat Smith’s son in Benghazi is par for the course – mere collateral damage.

Over a year ago, Hillary looked Pat Smith in the eye and lied to her face. http://bit.ly/1fZDgHc So much for Hillary’s commitment to the sisterhood. Obama promised Pat Smith answers regarding her son’s death. Pat is still waiting for answers about what happened. http://bit.ly/1cGSEsa But then, what else could you expect from a president recently awarded Liar of the Year? http://bit.ly/1he32ek

Yes, liberals like the NYT, Hillary and Obama only give a rat’s derriere about liberal women that they can exploit to further their liberal agenda. Cindy Sheehan was a liberal darling until she could no longer further their cause. http://bit.ly/KimIjB Then, Sheehan was thrown away on their pile of broken lives and dreams sacrificed for their agenda.

Ms Smith, I am confident I speak for millions of Americans. We are deeply sorry for the loss of Sean, your brave son. Our prayers and support are with you. May God bless you and your family.