More and more it seems, the nations of the world are arrayed against us: Israel is criticized for not accepting a Fatah-Hamas unity government, for building in Judea and Samaria, etc. etc. But there is one turn-around that, while modest, is significant.

The government of Australian Prime Minister “Tony” Abbott (pictured) “has ruled out using the term ‘occupied’ when describing Israeli settlements in East Jerusalem, prompting suggestions about a shift in Australia’s foreign policy.” 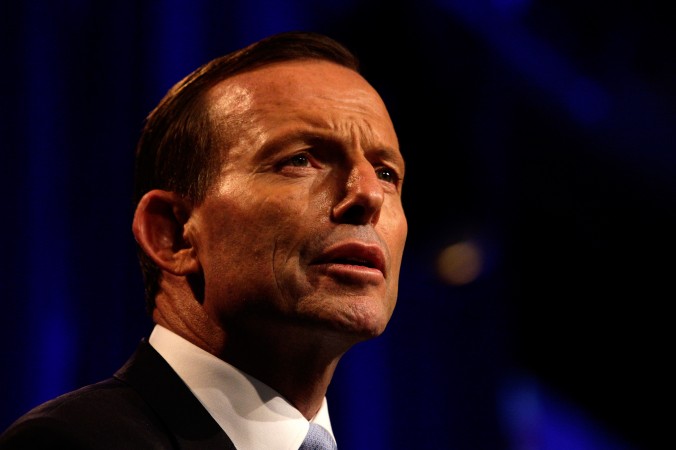 “The government on Thursday delivered a statement to clarify its stand on the controversial question of the legality of settlements after the issued flared up at a [Australian] Senate hearing the night before.

“’The description of East Jerusalem (sic) as “occupied” East Jerusalem is a term freighted with pejorative implications which is neither appropriate nor useful,’ [Attorney General George] Brandis told a Senate estimates hearing [speaking for Foreign Minister Julie Bishop].

“’It should not and will not be the practice of the Australian government to describe areas of negotiation in such judgmental language.’”

This does not mean that Australian policy now considers Judea and Samaria irrefutably Israeli, but, rather, that it acknowledges that Israel may have a legitimate claim, which must be resolved in negotiations. And it’s a giant step in terms of fairness.

The shift in attitude began with Julie Bishop, who on a visit here in January famously said:

“I would like to see which international law has declared them [the settlements] illegal.”

In light of this apparent shift in policy, the Australian foreign ministry has taken hits from a host of countries that are “shocked” that anyone could fail to see eastern Jerusalem (there is no such place as “East Jerusalem”) and Judea and Samaria as anything but “occupied.” This goes, by the way, for some members of Australia’s Senate as well.

And the Palestinian Arabs, who are considerably threatened by such a position? Saeb Erekat, the PLO chief negotiator, wrote that “diplomatic recognition of the situation created by the attempted annexation of our capital is a flagrant violation of international law.”

Sigh… they rarely make a statement without evoking a non-existent “international law.”

What this shift does is provide a bit of hope. If only some other foreign ministries were to take note. Many, I recognize, are lost causes. But not all.

It provides a signal lesson as well: Where there is even a modicum of open-mindedness and willingness to learn on the part of diplomats, attitudes can be changed as facts are presented.

It is unlikely that it is a coincidence that in recent weeks there have been meetings between Israelis – presenting the case for Israel’s rights – and representatives of the Australian government. Most significant was a meeting between Minister of Housing Uri Ariel (Habayit Hayehudi) and Australia’s ambassador to Israel, Dave Sharma. This was held in – shock! – eastern Jerusalem, where Minister Ariel has his office. And there was also a meeting held in Tel Aviv between Australian Embassy political attaché Bill Rhee, and Ari Briggs, Director of International Affairs forh Regavim (and originally from Australia himself), Elie Pieprz from the Yesha Council foreign desk, and Jeff Daube, head of ZOA in Israel and my Legal Grounds co-chair.

We – all of us! – have to continue to make the case for Israel.

Another ray of light: Ruby (Reuven) Rivlin of Likud has just been elected by the Knesset to be the 10th president of Israel. 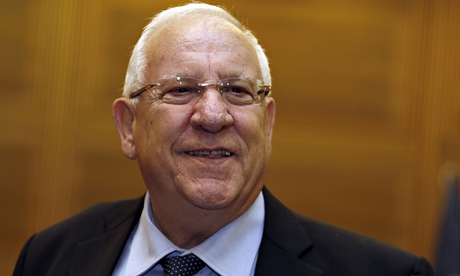 He won in a run-off vote against Meir Sheetrit of Hatenua, 63-53, after neither candidate, in a crowded field of would-be presidents, secured a majority the first time around. I had scrupulously avoided reporting on the presidential campaign, as it was hardly one to do Israel proud. The accompanying scandals and accusations, and political jockeying were not the sort of issues I choose to write about in the limited space of my postings.

From where I sit, Rivlin – who leans right and is opposed to a Palestinian state – is by far the best of the candidates. A lawyer and member of a family whose roots in Jerusalem go back for several generations, he has served twice as speaker of the Knesset. He wrote, before being elected, that:

’’”…the position [of president] is shaped primarily by the character of its incumbent and his cultural, historical, personal, and human identity. The president’s agenda is determined mainly by the goals he sets for himself.

“…I believe that the president, as Israel’s representative to the world at large, must also give thought to Israel’s role on the international stage. Against the background of the criticism of Israel, it sometimes seems that we are neglecting our aspiration to be a ‘light to the nations’ in favor of the vital and unavoidable task of trying to explain ourselves and to fend off the efforts to eat away at the legitimacy of the State of Israel. Israel’s strength lies in its human capital. It can and must serve as a key player that contributes some of its cumulative experience and capacities to the rest of the world…

”The presidency is a sort of social compass whose nonpartisan character is its raison d’être. The ability of the president to be perceived as someone with whom all Israelis can identify depends on his ability to avoid being a party to debate…”

I say amen to this last: may he honor it throughout his presidency. He began with the right tone, immediately after his election, by saying he was going to be a “man of the nation.” The disparate elements of our nation badly need a figure who can tie us together. We shall see…

It is with no regret that I bid goodbye to outgoing president Shimon Peres who maddeningly overstepped the bounds of his office time and again by making highly politicized and inappropriate statements that reflected a position far to the left of that of the government. Although I will mention an enormous unease that exists in some quarters that Peres, out of office, will utilize his prestige to undermine the government and do even more damage.

Should Rivlin step out of his “man of the nation” role and espouse a public political position as president, at least we know he won’t go in the direction that Peres went. And we won’t hear him refer to Abbas as a “man of peace.”

Also semi-encouraging is the announcement last week by Housing Minister Uri Ariel (Habayit Hayehudi) that tenders have been published for building 1,500 new units in eastern Jerusalem, with 400 units in Ramat Shlomo, and in Judea and Samaria, with 700 units in the Gush Etzion towns of Efrat and Beitar Ilit, and smaller numbers of apartments in Ariel, Alfei Menashe, and Givat Ze’ev.

Building is good. Why this is only semi-encouraging is because the announcement was said to be a response to the PA involvement in the unity government. What should be our right, and declared as such, is demeaned what it is presented as “retaliation.”

Needless to say, US Ambassador to Israel wasted no time in condemning this announcement of building.

With the items above, I think we’ve covered the major “rays of light” at present. It would be foolish to expect too much at one time.

I alluded above to tensions within disparate parts of our nation, and we are seeing this in particular right now with the disputes within the governing coalition as to what should come next, now that the “negotiations” have fallen apart. Some of the statements we’ve been exposed to are patently ridiculous.

I refer in particular to what Finance Minister Yair Lapid (Yesh Atid) has now proposed: “Israel should halt settlement construction deep inside the West Bank and in any case withdraw from areas that it does not expect to keep under a peace agreement. He said such moves would clear the way for a final agreement and negotiated borders with the Palestinians.”

How far removed from reality can he be? A final agreement with Fatah, which is in a unity arrangement with Hamas? Does he not realize how quickly Hamas would move into areas we withdrew from?

Netanyahu, for his part, responded that Lapid is demonstrating lack of experience – that proposing concessions without the promise of a return is foolish. He’s correct of course. Not that our prime minister, for his part, has seriously grappled with the current situation or avoided statements that are troubling.

Economy Minister Naftali Bennett (Habayit Hayehudi) is probably only a bit more realistic than Lapid at this point in suggesting that annexation of Area C begin.

I go on record here, as I have in the past, as totally supporting Israeli sovereignty over Judea and Samaria. But I recognize that – unfortunately – neither the nation nor the government is ready to stand behind this move. Not yet. Which is why I co-chair the Legal Grounds Campaign: to promote the concept of Israel’s legal rights, and to continue to promote it until there has been a shift in the paradigm of thinking.

If any part of Bennett’s proposal possibly makes sense right now, it is the annexation of Gush Etzion, as a starting point. This bloc just south east of Jerusalem that is home to 20 Jewish communities has a long history of Jewish settlement and sacrifice that pre-dates the State. See: http://www.gush-etzion.org.il/history.asp

To make the case for the Gush as intrinsically part of Israel is not difficult.

The prediction here at the moment is for continuing tensions amongst various factions of the coalition.

And what of the unity government?

At the Cabinet meeting on Sunday, Netanyahu said:

This was entirely predictable. It is what I’ve observed over the years: in shared ventures, Hamas always gains the upper hand over Fatah and further radicalizes Fatah.

The prime minister also noted that Hamas is reiterating its intention to destroy Israel. This is clearly the case, with Hamas retaining its “resistance” policy and its separate “resistance” forces in Gaza.

He then called upon the international community to “apply pressure” on Abbas to break with Hamas. And here is where he also departed from reality. For the international community has already done their “hear no evil, see no evil” routine and agreed to support that unity government. At this point, his calls constitute no more than “blowing in the wind.” They will change nothing.

Netanyahu condemned support for the unity government at the beginning.

Would that he had simply said now that it is greatly regrettable that the international community will not apply pressure upon Abbas, that failing to do so is a moral as well as diplomatic error, and that the community cannot expect Israel to adopt similar policies in this matter. Period.