Because first things must come first, I begin by marking National Unity Day.

As Michelle Napell of One Family Fund wrote in a message:

“We prayed for them, we cried for them and now we remember them.

“It has been one year since terrorists kidnapped and murdered Israeli teenagers, Gil-ad Shaer z’l, Eyal Ifrach z’l and Naftali Fraenkel z’l. As thousands of Israelis searched for them last summer, Jews from around the world united in an unprecedented way to support the boys’ families as they coped with uncertainty, pain and loss.

“Today, the 16th of Sivan 5775 – June 3rd 2015, Unity Day has been designated to remind us that regardless of our challenges, there will always be far more that unites us than divides us.”

We, the people of Israel, are indeed remarkable in how we respond to tragedy.

My prayer – and let it be the prayer of everyone – is that we come together like this, by the hundreds of thousands, the millions, ultra-Orthodox and secular, Ashkenazi, Sephardi and Mizrachi, young and old, to celebrate peace and blessings upon the nation.

A clarification, prompted by questions from a couple of readers:

I did not write yesterday that the US has never sold bunker busters to Israel.  Indeed, it has.  But those bunker busters are smaller ones, such as BLU bunker busters.  The BLU 109 weighs 2,000 pounds and the BLU 113 weighs 5,000 pounds.  Both of these munitions, were, I believe, recently acquired by Israel from the US to augment existing stores, but are a very far cry from the MOP, which weighs 30,000 pounds.

What the US has provided cannot break into the underground reinforced nuclear facilities of Iran, or pierce through the mountain at Fordow.  The MOP, which can, the US will not sell to Israel.

The full interview of Obama, which I wrote about yesterday based on highlights, was released last night. When I wrote, I discussed what he said about Iran. But there was a second major theme he touched upon: “the peace process.”  I had hoped to come back to this today even before the full interview was released.  Now what he said about negotiations has been featured in news stories, and a response is even more important.

I find it fascinating, that some sources refer to Obama’s interview as a “charm offensive.”  But I?  I do not find him charming at all.  (Major understatement.) He spoke about being there for Israel, and understanding how Israelis feel, and having concern for Israeli wellbeing, etc.  Facile words. Let’s look a bit closer.  He said (emphasis added):

“I think Netanyahu is someone who is predisposed to think of security first; to think perhaps that peace is naïve; to see the worst possibilities as opposed to the best possibilities in Arab partners or Palestinian partners. And so I do think that, right now, those politics and those fears are driving the government’s response.”

He was concerned, he said, about Israel having a “politics that’s motivated only by fear,” which could stand in the way of “peace” with the Palestinians Arabs.

What motivates Netanyahu is a prudent and highly realistic assessment of the situation. Regrettable – no, despicable – that Obama chooses to demean this realism.

Every time Israel has withdrawn from territory, radical terrorist groups have moved it.  This is not “fear;” it is historical fact.

Hamas, which overthrew Fatah (the PA) in Gaza eight years ago, is itching to do the same thing in the Arab areas of Judea and Samaria. There is a strong Hamas presence there, and the only thing that prevents them from pushing over Abbas – who is extraordinarily weak and unpopular – is the presence of the IDF.  The IDF does operations daily (actually, nightly) – uncovering weapons caches and exposing places where weapons are manufactured; arresting wanted terrorists and foiling plans for terror attacks.

Were we to pull out of Arab areas of Judea and Samaria, we would have a terrorist entity in our midst.  A fact that is of no concern to Obama, obviously.  Obama, who cares for Israel.

There is more: the terror entity at our border in the end might not be Hamas, but jihadist groups that make Hamas operatives look like peaceniks.

Take a look at this map: 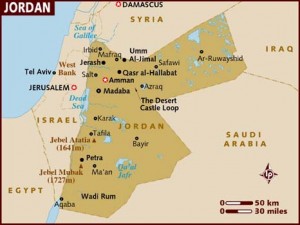 Jordan is to Israel’s east.  At Jordan’s north and north-east are Syria and Iraq – hotbeds of instability and fierce violence, home to ISIS and other savage jidhadist groups.

The king of Jordan sits uneasily on his throne, for there are radical elements in his nation already. Should he fall, and radicals take control, they would quickly move into Judea and Samaria, if that region, or part of it, was controlled by the PA.  No way PA forces could repel them.  Only the IDF could stand against them.  If radical jihadist were to move into Judea and Samaria, they would bring with them rockets that could easily reach the Ben Gurion Airport near Tel Aviv. And life as we know it in a thriving, vibrant Israel would come to a halt.

Obama demonstrates unmitigated gall to suggest that it is an inappropriate and unconstructive “fear” that prevents Netanyahu from risking this scenario by “taking a chance on peace.”

As Obama exposed his intentions towards the Iranian negotiations by taking the military option off the table, so does he here expose his true disregard for Israel.

And still there is more, as Obama also said that Israel is losing its “credibility” with its “intransigence” – “so many caveats, so many conditions, that it is not realistic to think that those conditions will be met anytime in the near future.”

When asked about maintaining anti-Israel vetoes at the UN, he hedged:

“It is more difficult for me to say to them, ‘Be patient, wait, because we have a process here.'”

This is a veiled (or not so veiled) threat: go back to the table or I may not support you at the UN.

Obama’s entire representation of the situation is distorted.  He puts the onus on Israel, ignoring the many compromises that have been made by Netanyahu over time – compromises not in Israel’s best interest, such as release of prisoners, and freezing of construction in Judea and Samaria. At the same time, he fails to mention the enormous intransigence of Abbas, and that it was Abbas who walked away from negotiations the last time around.

You can see the text of the entire interview here:

Having said this about Obama, I now make comments about Netanyahu, as well:

Just the other day, I wrote about this, as I have many times before.  It is not enough, to refuse to negotiate a state with the Palestinian Arabs because of the security risk – as legitimate as this reason is.

Now is the time: Our government must declare the fact of Israeli rights to the land.

The message Obama delivered in his interview was, undoubtedly, the motivating factor for Netanyahu’s recent statement that “two states for two people” is the only possible solution.  It is time to stop appeasing, to stop turning into a pretzel in order to demonstrate how willing Israel is to negotiate.  We cannot win this way.  We simply weaken ourselves.

It is time to start telling Obama and the greater Western world:

It is time to go on the offensive. And to start talking about alternatives to “the two state solution.”

Abbas repeatedly refers to his intention to seek statehood via the UN.  But what he is doing abrogates the Oslo agreements.  Israel has simply chosen not to call him on this.  The fact that we have no obligations under Oslo any longer also needs to be said loud and clear.

I close here with on remarkable statement by Abbas that should be sent to Obama by about 10,000 people.

Abbas was in Amman, to smooth over some tensions.  In the course of statements he made, Abbas, cited directly by Al Quds, said that the relationship between Jordan and Palestine is the relationship of “one people living in two states.”

How about that? Then there is no “Palestinian people” after all, huh?  Abbas ought to know.