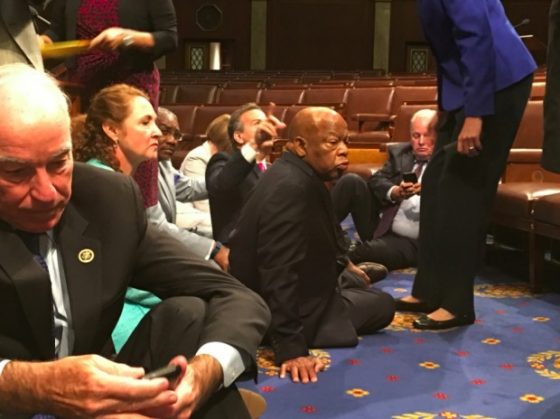 Last week, when Democrats staged a sit-in in the House of Representatives over gun control legislation, the mainstream media were all-too-willing to allow the participants to claim the mantle of being involved in a historic civil rights movement. For example, ABC News carried an article discussing the civil rights activities of Congressmen John Lewis (D-GA), labeling him “the face of the Democrats’ unprecedented sit-in.” In this story, and practically every mention of him throughout the day, he was labeled an “icon of the civil rights movement.”

But this sit-in was hardly unprecedented, or comparable to ending legalized discrimination on the basis of race. The sit-in followed, and was inspired by, a 15-hour filibuster in the Senate led by Sen. Chris Murphy (D-CT). In 2008 the tables were turned when Speaker of the House Nancy Pelosi (D-CA) turned off the lights on Republicans in the House who were organizing for energy legislation amid high gas prices.

“Democrats were furious at the GOP’s move then, called it a stunt,” writes Russell Berman for The Atlantic. “Eight years later, Democrats are trying to cloak what is essentially the same attention-seeking maneuver in the weightier historical tradition of the sit-in.”

Democrats decided to adopt the tactics of Occupy Wall Street—call it Occupy Congress—by broadcasting despite House rules and operating without decorum—even shouting down those who tried to speak. Yet the mainstream media yielded to the liberal narrative that this was an historic moment for civil rights, and that the public wants more gun control laws.

“The sit-in is because you won’t bring this to a vote,” CNN’s Wolf Blitzer said to Speaker of the House Paul Ryan (R-WI) on his June 22 show, The Situation Room. “House Democrats have tried to force a vote on all of this week on the questioning—the questioning of how to prevent those on the terror watch list, the no-fly list from purchasing a gun.”

Ryan condemned the Democrats’ sit-in as little more than a “publicity stunt.” “Point number two is this bill was already defeated in the United States Senate,” he told Blitzer. “Number three, we are not going to take away a citizen’s due process rights.”

The Democrats and Republicans submitted two failed Senate bills each on gun control, and a fifth compromise bill sponsored by Senator Susan Collins (R-ME) passed a procedural hurdle on Thursday, but is not expected to garner the 60 votes needed to pass. Yet nearly all of the news coverage has suggested it is the Republicans who are the obstructionists, while offering little in the way of contrasting the substance of the various bills.

But Blitzer continued to advocate for the Democrat’s agitation, saying, “Why not at least allow a vote up or down [in the House]?”

Maybe Blitzer forgot that in the last Congress, when the Senate was run by then-Senator Majority Leader Harry Reid (D-NV), more than 350 bills that passed the House failed to receive a vote in the Senate.

The Democrats’ sit-in ended on June 23, drawing ridicule from left-wing commentator and third-rate comedian Bill Maher for pledging to stay until they got their vote, but lasting only 25 hours before giving up. Yet, the media have historical amnesia regarding how it treated Republicans in 2008. Reporting from Politico in 2008 refers to the GOP’s own sit-in as a “stunt,” and worse, a “tantrum.”

The truth is that liberal policies and Democratic Party governance have led to many of the worst problems that plague the inner cities, including the high rate of carnage that occurs in cities like Chicago and Baltimore. Welfare, for example, has helped to institutionalize homes without father figures because of perverse incentives against marriage. And the Ferguson Effect may be causing crime to increase across the country.

This, from a party claiming to reduce crime with further gun control initiatives.

“The murder rate is going up in many cities across the country, The New York Times informs us, and the experts are baffled,” writes “Jack Dunphy,” a cop in southern California writing this May under a pseudonym for National Review.

“When police officers on the street spot someone whose behavior is indicative of possible lawbreaking, they know that initiating a stop carries the risk of an altercation that may not unfold in a manner approved by cowardly superiors, rabble-rousing ‘community activists,’ craven politicians, or perhaps even the president,” “Dunphy” argues. “Against that risk he weighs the benefits of driving on by and finishing his shift on time and in one piece, and without having played the villain in some new YouTube sensation.”

In other words, the fear of recreating another Ferguson in their own town scares police and makes them risk-averse. “There’s a perception,” FBI Director James Comey said, “that police are less likely to do the marginal additional policing that suppresses crime—the getting out of your car at 2 in the morning and saying to a group of guys, ‘Hey, what are you doing here?’”

In this fearful climate, the Democrats, along with a willing press, are pushing once again for stricter gun laws. If, as new polling indicates, 90 percent of Americans “said they support expanding background checks” for gun purchases, then the Republicans’ push to ensure that all gun buyers, even those on terror watch lists, receive due process is a principled stand—not a political one—despite public pressure. No one wants suspected terrorists to be able to purchase guns, but Mateen wasn’t currently on any terrorist watch lists. He had been on, then off, after the FBI closed their investigations on him. Others have been wrongly placed on the lists, with no knowledge of how they got there, and have great difficulty getting their names removed.

Yet the media continued to cast the Democrats’ short sit-in as an instance of seizing the moral high ground from Republicans who, they argue, are in the pocket of the National Rifle Association (NRA). This is little more than an attempt to swing the election through favorable coverage of Democratic initiatives, and suggesting that Republicans are heartless.

Pressures for political correctness led the government to initially disclose Mateen’s 911 call with his pledge of loyalty to the Islamic State carefully edited out. The Department of Justice and FBI did, eventually, release an un-redacted transcript of one of Mateen’s calls containing his support for ISIS, but condemned this episode as an “unnecessary distraction.” The transcript says that he kept referring to “God,” rather than “Allah,” contrary to what several eyewitnesses said they heard.

The media, Obama administration, and Democrats alike are trying to muddy the water so that Orlando becomes an organizing point for gun control, rather than the need to stop terrorists from targeting American citizens. Yet, despite this tragedy, the public cannot allow the media to ignore the due process rights of Americans.