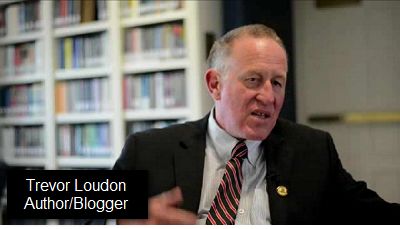 The terror attack in London has some American cities on alert, watching activity on major bridges.

“You cannot rely on the government in its present state to effectively guard your internal security to keep you safe,” says Loudon.

That’s the message the author and filmmaker is making in his book and documentary, both titled “The Enemies Within.”

“What we’re talking about are the internal enemies of the Constitution. We contend these are actually more dangerous.”

Loudon argues groups like the Muslim Brotherhood have influenced members of Congress. The New Zealand native has been traveling the country talking to people about what he sees as a problem and the solution to it.

“Have the Muslim brotherhood designated officially by the state department as a terrorist organization. Just as Hamas is, just as Al Qaida is.”

Loudon makes his point on the same day as a deadly terror attack in London that left four dead.

“There are Islamic cells all over Europe, all over the Middle East, and obviously here in America who can strike at a moment’s notice.”

The New Zealand native says it’s another reminder of the world we live in.

“If we don’t do something about it, it’s just going to be a continual pattern of American and Europeans being slaughtered in their own homes, in their own cities.”

Loudon explains his message is not to appeal to partisan politics. Instead, it’s to appeal to American’s love for the constitution.

“They do want their American identity. They know the country’s based on the Constitution. They know it’s based on a free enterprise system and strong national defense. They know America has been a world leader and most Americans will buy into that.”

Loudon will take his message to the Cincinnati area before going to Canada.