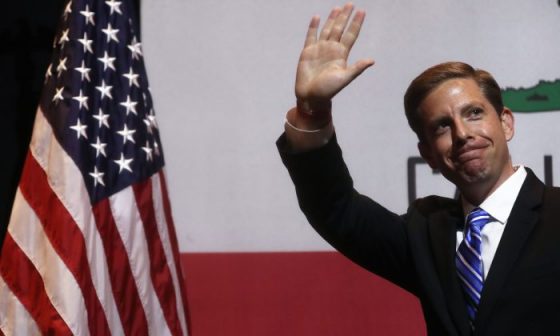 The Flip the 49th leadership team consisted of David Lagstein and Terra Lawson-Remer. Lagstein was once a leader of the scandal-plagued leftist voter-registration group, The Association of Community Organizations for Reform Now (ACORN). He was one of the earliest targets of the undercover investigative team of James O’Keefe — of Project Veritas — and Hannah Giles, which exposed many of ACORN’s corrupt practices in 2009.

According to the San Diego Union-Tribune:

“ACORN’s local director yesterday fired the community organizer who was caught on video providing advice about crossing the border to a couple posing as a pimp and a prostitute as part of a national sting.

“Fox News aired a 52-second video Wednesday night showing the ACORN employee, Juan Carlos Vera, answering the couple’s questions. They later said they were talking about young girls from El Salvador being brought over for a prostitution ring. One snippet showed Vera asking the woman how much her services cost.

“At a news conference yesterday afternoon, David Lagstein, director of the ACORN office in National City, said he believed that his employee had done his best to deal with a challenging situation and would not be disciplined.

“But two hours later, Lagstein said he had seen a seven-minute version of the video and decided that Vera’s statements in the video contradicted what Vera had told him and were unacceptable.

“Lagstein said he still considers the secret videotaping to be ‘unscrupulous’ and part of a smear campaign designed to distract from the debate on health care reform.”

Lawson-Remer is a fellow at the Center for Advanced Study in the Behavioral Sciences at Stanford University. Lawson-Remer is also the founder and managing partner of the Catalyst Project, which is closely affiliated to the pro-China Freedom Road Socialist Organization.

It turns out that Lawson-Remer has a long history of hard-left organizing and apologizing for communists.

She was a “key organizer” for a protest against then-President George W. Bush: “In their search for allies, the organizers have embraced communists and their fellow travelers. A key organizer, Terra Lawson-Remer, who orchestrated the news conference, refused to disavow the involvement of Communist Party USA in what is billed as the ‘April 20th Mobilization’ to ‘Stop the War,’” Newsmax reported.

Shortly after 9/11, Lawson-Remer, the founder of Students Transforming and Resisting Corporations, was mentioned in an article in the Democratic Socialists of America-aligned magazine “The Nation” as working toward several goals, including “resistance to scapegoating of Muslims and Arab-Americans” in the wake of the attacks on the Twin Towers.

Later in her career, Lawson-Remer “served as a senior adviser at the U.S. Department of the Treasury during the Obama Administration,” according to her website. “She joined the Treasury while on leave from the [far-left] New School for Social Research, where she was an assistant professor of international affairs.”

Prior to that, Lawson-Remer was a “fellow for Civil Society, Markets, and Democracy at the Council on Foreign Relations, where she directed the Council’s initiative on democratic transitions and wrote and advised on international economic law, inequality, and global development,” according to her website.

Lawson-Remer is also a member of the San Diego Democratic Socialists of America’s public Facebook group.

Emiliana Sparaco was another prominent Flip the 49th leader. She is a veteran of activist group United Against Police Terror, a San Diego-based member of the Communist Party USA, and a former national leader of the Young Communist League.

In October 2017, Sparaco was part of an eight-member delegation organized by the Communist Party USA that flew to Sochi, Russia, to join over 50,000 youth from over 183 countries for the 19th World Festival of Youth and Students.

This international communist youth festival has been held every three or four years since the earliest days of the Cold War, as revealed in the Communist Party USA magazine “People’s World:”

To mark this auspicious occasion, Russian President Vladimir Putin personally intervened to secure the Sochi venue for festival attendees. He also keynoted the conference, with inspirational words for the tens of thousands of young communists in attendance.

Sparaco addressed a smaller gathering on July 19, 2018. At a San Diego area data sharing/election debriefing meeting for Democrats and radical activists, Sparaco outlined her work with Flip the 49th.

“Emiliana Sparaco summarized the successful efforts of Flip the 49th to nominate Mike Levin as the Democratic candidate for November’s midterm congressional election. The strategy relied on effectively targeting low propensity voters with education and GOTV efforts,” according to notes from the meeting.

In other words, Flip the 49th actively worked to secure Levin the Democratic nomination ahead of his opponents Sarah Jacobs and Doug Applegate. Why did the Marxists favor Levin? Did they consider him most sympathetic to their cause?

It’s unlikely that Levin was unaware of the Marxist leanings of some of his key supporters.

The San Diego Progressive Labor Summit was held on Feb. 3. It was a one-day event, “bringing together members of the San Diego Labor community with left-of-center activists.”

Levin attended this gathering where he would have seen his Flip the 49th leaders Sparaco and Lawson-Remer speaking alongside well-known Marxists such as Daraka Larimore-Hall, a longtime Democratic Socialists of America member and secretary of the California Democratic Party.

Levin was almost certainly aware of his radical team. But given the extensive communist infiltration of today’s Democratic Party, he likely assumed the hard-left connections would go unnoticed and unreported.

Trevor Loudon is an author, filmmaker, and public speaker from New Zealand. For more than 30 years, he has researched radical left, Marxist, and terrorist movements, and their covert influence on mainstream politics.