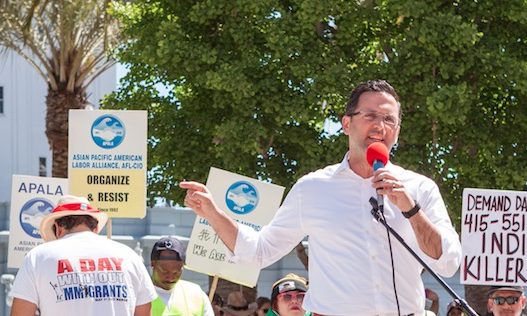 Cortez Masto actively courted APALA. She keynoted their convention in August that year, and after the election admitted that “APALA and Asian-American media were critical” for her win, according to People’s World.

With such tight margins, it’s conceivable that the 72,000 registered Asian-American or Pacific Islander voters targeted by APALA may have made the difference. Without APALA, it is possible that President Donald Trump might have one or two more senators from Nevada in his column right now.

Given that pro-Chinese communist networks have supported Democrat candidates in Virginia and Mississippi races this election, it may be worth looking into APALA’s background.

“The formation of the Asian Pacific American Labor Alliance (APALA) in 1992 was a milestone in providing a voice for Asian Americans within the labor movement. … The establishment of APALA has its roots in the Asian American Movement of the 1960s and 1970s,” according to APALA founder Kent Wong, writing in “Legacy to Liberation: Politics & Culture of Revolutionary Asian Pacific America” by Carol Antonio.

“In the 1980s, Asian activists began to set up Asian labor committees in key cities around the country. … From 1991 to 1992, there were a series of national meetings of Asian American trade unionists. … The founding convention of the Asian Pacific American Labor Alliance in 1992, surpassed everyone’s expectations.”

APALA was Marxist-led and pro-China leaning from the start — and has remained so to this day.

Wong himself was a leader of one of the most slavishly pro-Beijing groups of the era — the Communist Workers Party (CWP).

Other APALA co-founders included future Oakland Mayor Jean Quan of the CWP, and Victor Uno of the pro-China Line of March and Union of Democratic Filipinos, a support arm of the Maoist guerrilla New People’s Army of the Philippines.

Current APALA first Vice President Kim Geron was a leader of the Unity Organizing Committee, which was founded in 1991 from the remnants of the pro-China League of Revolutionary Struggle.

Current board member Ligaya Domingo is the daughter of former Line of March leaders Silme Domingo and Terri Mast.

Another board member Alex Hing was active in the League of Revolutionary Struggle, the Unity Organizing Committee, and the ultra-Maoist Red Guard Party.

In 1970, Hing went on a delegation to North Korea, North Vietnam, and China.

“China, North Korea, and North Vietnam were all socialist, liberated countries. They were trying to make socialism work … But it was fascinating that there were people that liberated themselves from U.S. imperialism, and Vietnam was in the process of doing that at great cost. That was a life-changing experience,” Hing told the Asian American Writers’ Workshop.

APALA board member Jason Chan was part of a China Education and Exposure Program delegation to China in December 2013.

He spoke of his experiences at the Democratic Socialists of America’s (DSA) annual conference, the Left Forum, in New York City in June 2014.

“In 2013, a delegation of Chinese American organizers went to China to learn about organizing efforts in Mainland China. The culmination of conversations with more than 10 organizations in China organizing around labor, environmental justice, women’s rights, and queer issues opened up space for us to put forth the following questions: In China, what are the conditions people are organizing against? What are people fighting for? What is the nature of anti-capitalist struggle and the social justice movement in China … And lastly, what role do we play in the U.S. in supporting people’s struggles in China?”

“On May 24, 2000, the American labor movement suffered a significant defeat in their attempt to block Permanent Normal Trade Relations (PNTR) status for China. The House of Representatives voted 237–197 to approve PNTR for China. This was the labor movement’s largest legislative campaign in years, which mobilized resources of the American labor movement from coast to coast. But was this the best step to take on the heels of the powerful anti-WTO [World Trade Organization] coalition that emerged in Seattle last November?” Wong and Bernard wrote.

“For the U.S. to challenge China’s entry into the WTO because of political and human rights abuse amounts to hypocrisy. China should not be singled out for some of the very same human rights abuses that occur in the U.S., such as widespread use of prison labor.

“The main threat to economic security, dignity and human rights of U.S. workers is domestic and global corporations and their institutions: the WTO, the IMF [International Monetary Fund], and the World Bank. We need to keep our eyes on the prize, move beyond the Cold War, move beyond unilateralism, and move toward genuine international labor solidarity.”

Bernard, Wong, and a number of other labor academics and union officials were invited by the state-run All-China Federation of Trade Unions (ACFTU) for a nine-day trip beginning March 20, 2002.

Wong and co. enjoyed an audience with Wei Jianxing, ACFTU chairman and member of the Communist Party Politburo Standing Committee.

“Mr. Wei is also head of the Communist Party’s Central Commission for Discipline Inspection. In 1998, he was put in charge of what is known as the Office on Social Stability, which is responsible for defusing worker unrest,” according to an Oct. 21, 2002, article in the New York Sun.

“An article in the Spring 2001 edition of the China Labor Bulletin said that Mr. Wei has frequently traveled across China encouraging the Chinese government’s anti-graft campaign and its anti-crime campaign, ‘Strike Hard,’ which ‘has been consistently criticized by Amnesty International and other human rights organizations for leading to rights violations, brutality, and executions.’”

The purpose of the China trip was “to explore possible ways of having a dialogue and communication between unions,” said Wong, then director of the University of California–Los Angeles’s Center for Labor Research and Education.

“I wanted to break a pretty severe barrier that has been there since the Cold War,” said Wong, according to the New York Sun.

In 2007, Wong participated in a delegation of the Los Angeles County Federation of Labor to establish formal relations with the Shanghai Municipal Trade Union Council.

Tubach was formerly active with the Federation For Progress, a front for the CWP.

Wong’s UCLA Labor Center participated in a “historic meeting” between the Change to Win labor federation and the ACFTU in August 2009. An agreement signed by Change to Win chair Anna Burger and ACFTU Vice Chairwoman Sun Chunlan at ACFTU headquarters in Beijing promotes cooperation between the two federations on “key projects, such as joint research on multinational corporations operating in the United States and China,” according to the winter/spring 2010 issue of the Labor Center publication Labor Education News.

In late 2010, the Labor Center also participated in a binational U.S.–China conference, hosted by the ACFTU, to “explore ways research findings can improve labor standards,” according to the same publication.

Wong also led an education union trip to China that year. He also helped the Los Angeles AFL-CIO establish sister relations with the Shanghai labor movement, and assisted the Orange County AFL-CIO and the International Longshore and Warehouse Union in building similar relations.

There is no direct evidence that Chinese officials encouraged APALA to get involved in U.S. elections. However, given their antagonism of Trump, it’s likely they are pleased with the results.

Incidentally, Cortez Masto’s 2016 Senate bid was endorsed and partially funded by PowerPAC+, which is headed by wealthy San Francisco lawyer Steve Phillips. A former Maoist student radical, Phillips was involved with the League of Revolutionary Struggle and the Unity Organizing Committee at Stanford University. He is close to several APALA members, including first vice president Kim Geron, another UOC veteran who then served on the PowerPAC+ board.

Nevada was once regarded as a key swing state. It is now becoming like Colorado and Virginia — turning irreversibly blue thanks to hard-left activists bent on taking power in the 2020 elections and beyond.