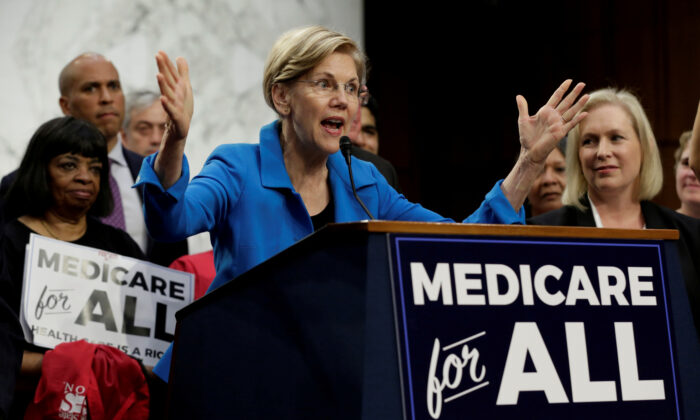 Senator Elizabeth Warren (D-Mass.) speaks during an event to introduce the “Medicare for All Act of 2017” on Capitol Hill on Sept. 13, 2017. (Yuri Gripas/Reuters)

However, the WFP sees its role as going beyond supporting Warren. The longer-term aim is to use her movement to build a major left-wing coalition working within, but essentially independently of, the Democratic Party.

In a recent interview with Organizing Upgrade (a front for the communist group Liberation Road), WFP director Moe Mitchell stated that “If we are to seriously achieve socialism, there needs to be some transitional step between where we are in neoliberal capitalism and socialism.”

Mitchell went on to make it clear that backing Warren, even over the more explicitly socialist Bernie Sanders, would be a significant step down the socialist road, because Warren appeals to a much larger base than Sanders can, and she can be used to build a movement with influence way beyond the next election.

On the left, WFP backing is a big deal. In states where it’s legal WFP runs its own ballot line soliciting votes from the far left. These votes can then be added to the Democrat vote totals to gain increased majorities, especially for leftist Democrat candidates—like Sanders and Warren. Whoever gets the WFP endorsement is almost guaranteed a bigger chunk of the left vote.

In 2016, the WFP tended to be dominated by people close to the Democratic Socialists of America (DSA), which formed the backbone of the Sanders campaign. Therefore, it was no surprise that the WFP backed Sanders in that election cycle.

Since Mitchell and Nelini Stamp took over leadership of the WFP in 2018, the party has leaned more toward the Liberation Road line. Known until recently as the Freedom Road Socialist Organization (FRSO), Liberation Road leans toward Maoist politics and is one of this country’s leading pro-China communist parties.

Mitchell has been actively involved in several Liberation Road/FRSO fronts, including the Movement for Black Lives and Showing Up for Racial Justice (SURJ).

Stamp, WFP’s national organizing director, is also close to Liberation Road. She, too, was involved in Movement for Black Lives and in 2013 participated in the successful FRSO campaign to elect lifelong Marxist Chokwe Lumumba to the Jackson, Mississippi, mayoralty.

After the WFP endorsed Warren in September 2019 it created a firestorm on the left. Sanders backers regarded WFP’s support for Warren as a betrayal of the “Bernie” movement. The WFP was inundated with hate email, and Facebook blew up with howls of outrage from “Bernie bros” and aggrieved DSA comrades.

To settle the situation down a little, the WFP issued a statement, “A letter from the movement to the movement,” signed by over 120 black activists, mostly affiliated with Liberation Road. These included former Black Lives Matter founders Alicia Garza and Patrisse Cullors, former FRSO General Secretary Sendolo Diaminah, and FRSO comrade Ash-Lee Henderson, the co-director of the Highlander Research and Education Center, a communist training school situated in Eastern Tennessee.

The letter made the attacks on the WFP all about race–which is Liberation Road’s “modus operandi.”

“It was brave of the WFP to make an early endorsement, and it signals that the WFP is ready to be a real contender for power. … The WFP made a decision, with its members and supporters and staff, and there is now conflict over the substance of that decision. But let’s also be clear — the WFP is under new leadership. For the first time in its history, Maurice Mitchell, a Black man with decades of experience building movements and strengthening our democracy, alongside Nelini Stamp, a working class, woman of color and a gifted organizer with a long list of accomplishments, are now at the helm of the Party, where they should be. And apparently, some folks aren’t happy about it.

“These incredible leaders who led an organization to take a risk by lifting up the leadership of Black, Latinx, Asian and Pacific Islander and white communities in coalescing around a candidate with enough time to engage their communities deeply ahead of the 2020 election, are being threatened on a daily basis, by self-identified Sanders supporters, with hateful, violent and racist threats. ‘Uncle Tom.’ ‘Slave.’ ‘[expletive].’ These kinds of threats have no place in our movements and are reminiscent of the threats Black people would receive when daring to vote even though the white supremacists would try and discourage Black people from doing so.”

The letter did end on a slightly conciliatory note, calling for unity between Warren and Sanders supporters in the face of “one of the most serious threats to peace and justice in our lifetimes”—presumably meaning President Donald Trump.

“As Black leaders in this movement … [w]e demand that the Sanders campaign unequivocally denounce the racism in its ranks, and issue a public statement separating themselves from these abhorrent attacks. And we call on our movement to recommit to the real fight ahead of us. Democracy isn’t built in a day, and the WFP will need us, Sanders supporters and Warren supporters, to come together to defeat one of the most serious threats to peace and justice in our lifetimes.”

Liberation Road/WFP is apparently trying to “racially guilt” Sanders supporters into staying in the movement when their hero inevitably fails.

This Liberation Road/DSA divergence may explain why only three members of “The Squad”—the infamous foursome of far-left Democratic freshmen congress members—have endorsed Sanders so far. DSA members Alexandria Ocasio-Cortez and Rashida Tlaib, plus DSA supporter Ilhan Omar, have all gone for Bernie. The fourth “Squad” member, Boston-based Ayanna Pressley, has not.

Pressley, like Warren, has worked closely with Massachusetts-based FRSO/Liberation Road front groups for years—particularly the Beijing-friendly Chinese Progressive Association. It seems that Liberation Road, especially its large black membership, is leaning toward Warren.

Liberation Road is all about “intersectionality.” For them, Trump can only be defeated by mobilizing millions of women, “communities of color,” and the young. Sanders’ mainly white and male DSA supporters lean more toward traditional class-based Marxism. Liberation Road is targeting a much larger voter pool.

Many Liberation Road members do currently support Sanders, but it seems likely that most will jump to Warren when Sanders’ inevitable defeat becomes more apparent.

Liberation Road, the DSA, and the Communist Party USA have been cooperating for some time to build an anti-Trump alliance. The burning question for Liberation Road must be how do we get rid of Sanders, but keep his DSA base on board?

The only thing that can keep the movement together is to frame the WFP and the Warren base as the only viable vehicle for an ongoing socialist movement.

“From organizing mass movements like the Movement for Black Lives, and doing local base-building work for years – knocking on thousands of doors working on local issue campaigns – and from my perch here at WFP, there is wisdom in people’s organizations that are building long-term power and wrestle with the contradictions of attempting to build left grassroots organizations.

“There is also wisdom in individuals in movements, especially people who are newly politicized because they are not boxed in by the limitations of existing organizations or, frankly, they are so early in their development that they are not cynical about the possibilities of radical change.

“Both of those wisdoms are essential in moving the left towards actually building socialism. …

“So, the forces that are disappointed with any endorsement … I would invite them to organize their forces within the party [WFP] because this is a space where your organizing actually will matter, in a much more meaningful way than in the Democratic Party.”

If Warren also fails, which I believe she will, where will that movement go next? If a badly struggling Sen. Kamala Harris (D-Calif.) can stay in the race a few more months, her color and her Liberation Road connected friends might yet give her a surprise shot at the nomination. Or maybe another horse from the same Maoist stable, Sen. Cory Booker (D-N.J.), may pull off a shock breakout.