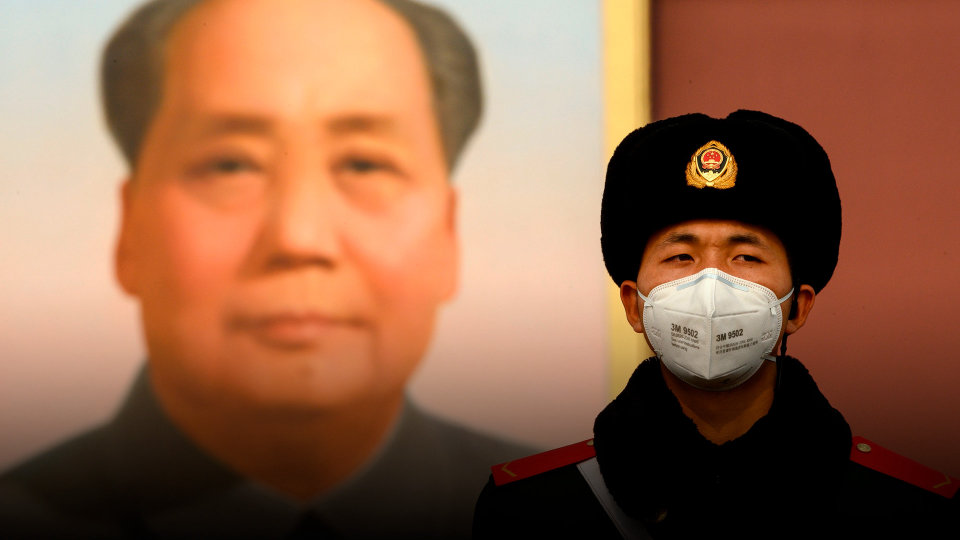 On the day commemorating the Nazi defeat in Europe, the new Nazis, the Chinese Communists, march ahead, making money from suffering, misery, and death. They are tightening the screws on America, as the bodies pile up and millions lose their jobs. President Trump is promising a better year in 2021, assuming he can win re-election.

Meanwhile, Americans fight among themselves, unsure of what the virus actually is or what it can do, and questioning the government’s response. Both sides lose sight of the real enemy in Beijing which unleashed the virus on America and figures to come out on top of the New World Order.

Bloomberg reports that sales of medical gear likely aided China’s April export numbers. In other words, the Communist regime was profiting from the death it inflicted on the world through the release of the coronavirus. Do we need any more evidence that this is a bloodthirsty and Nazi-like regime whose insatiable quest for power has to be countered and stopped?

So why is the Trump Administration apparently going forward with a trade deal with the enemy?

The Wall Street Journal reports that the top trade negotiators for the U.S. and China talked on the phone Friday, “pledging to create favorable conditions for the phase one trade deal…” But Trump contradicted that later on, saying he has doubts. Can’t we figure out who the enemy is? Do we need more proof?

When he says coronavirus was worse than Pearl Harbor and 9/11, he’s right. The difference is that in those cases Democrats and Republicans joined together to face the threat. In the case of coronavirus, Trump (and a few of his allies) have been the only ones willing, until now, to put pressure on China for killing our people with the coronavirus. He’s called it the “invisible enemy” but it has a face and name – Chinese dictator Xi Jinping and his Red Guard wannabes. Worse yet, the Red Chinese used money from our own National Institutes of Health to manufacture this and other deadly viruses in the notorious Wuhan lab. Our top federal doctors should lose their jobs over this alone.

Have we become paper tigers in the face of this danger, content to squabble with the Beijing bureaucrats about how many soybeans they’ll buy from America’s farmers?

On a day when President Trump and first lady Melania Trump commemorated the 75th anniversary of the Allied victory in Europe, the U.S. is dickering with the Chinese communists, who have killed and poisoned tens of thousands of our people, about agricultural products. We look ridiculous.

Why on earth would the U.S. proceed with a trade deal with such a foe? Instead, of talking trade deals, the U.S. should be going on a war footing so that we can eventually take revenge on the butchers of Beijing. Trump could and should use his emergency powers, including the Defense Production Act, to quietly assemble our own stable of dangerous germs as a deterrent to Beijing’s further aggression.

If we don’t wake up and quickly, the Reds will mow us down like those demonstrators for liberty in Tiananmen Square.

We are facing a determined adversary every bit as threatening in its potential military power as Nazi Germany. This is a regime that has killed millions more than the Nazis ever did. Most of them were inside China. But we are now seeing the bodies pile up around the world, and they all carry the body bag sticker, “Made in China.”

How many deaths will it take for America to recognize Red China as our enemy? Are we prepared to sit back and get hit again, with another virus attack? Will we then tolerate 50-60 million unemployed and another hundred thousand dead?

Yesterday the White House held a National Day of Prayer to ask for Divine help and guidance. God’s help is always needed. But this is not the time to be loving our enemies. This is the time to mount an aggressive defense against future attacks and to convince the Red Chinese authorities that we are prepared to unleash hell on them unless they close down not only their grotesque wet markets but their dangerous bioweapon labs.

America was the major player in defeating the Nazis. Are we up to the current task?

The Reds lied about the nature of the virus and covered-up its release from China into the U.S. and the world. This was calculated on their part. They know what it is capable of and don’t want us to know. One thing we do know is that the latest study from a respected independent body of public health experts in Hong Kong proves the virus is far more contagious than the ordinary flu and previous viruses. It could mean the virus was engineered to be more lethal and debilitating.

Faced with this threat, President Trump couldn’t take a chance. This finding demonstrates that he was right to acquiesce to demands to close down sectors of the economy. It could have killed millions in America, rather than just tens of thousands. It also can mean, however, that he is taking a risk in approving the reopening of the economy as long as the virus lingers and we don’t really know who has it.

China has us where it wants us. Let’s don’t dicker about soybeans when our survival is still on the line.

Cut through the social media censorship and demand that the politicians name the enemy and propose a strategy for victory over that enemy. The life you save may be your own. Don’t go to your grave without doing everything possible to avoid the Chinese digging America’s grave. It’s time to act.